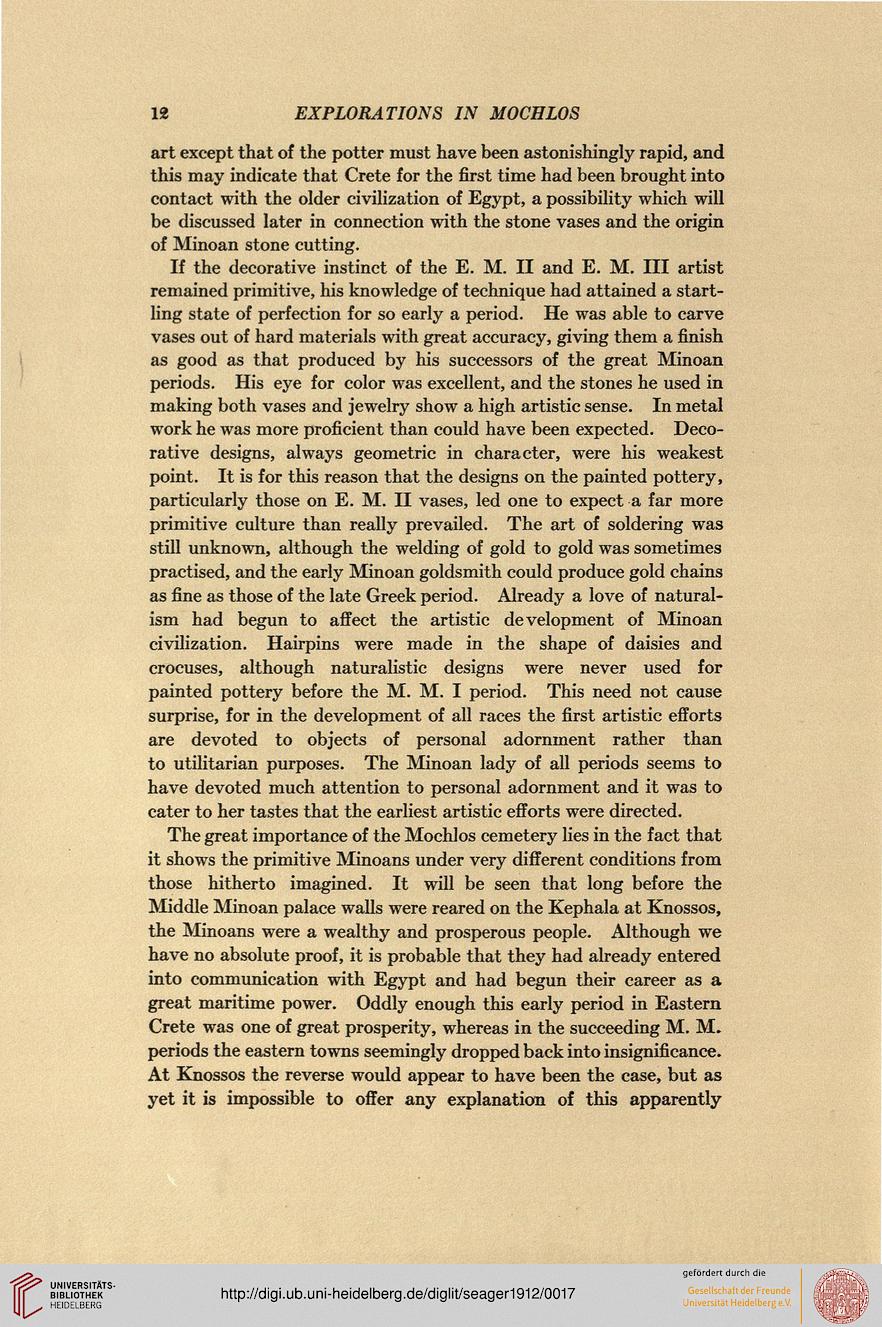 art except that of the potter must have been astonishingly rapid, and
this may indicate that Crete for the first time had been brought into
contact with the older civilization of Egypt, a possibility which will
be discussed later in connection with the stone vases and the origin
of Minoan stone cutting.

If the decorative instinct of the E. M. II and E. M. Ill artist
remained primitive, his knowledge of technique had attained a start-
ling state of perfection for so early a period. He was able to carve
vases out of hard materials with great accuracy, giving them a finish
as good as that produced by his successors of the great Minoan
periods. His eye for color was excellent, and the stones he used in
making both vases and jewelry show a high artistic sense. In metal
work he was more proficient than could have been expected. Deco-
rative designs, always geometric in character, were his weakest
point. It is for this reason that the designs on the painted pottery,
particularly those on E. M. II vases, led one to expect a far more
primitive culture than really prevailed. The art of soldering was
still unknown, although the welding of gold to gold was sometimes
practised, and the early Minoan goldsmith could produce gold chains
as fine as those of the late Greek period. Already a love of natural-
ism had begun to affect the artistic development of Minoan
civilization. Hairpins were made in the shape of daisies and
crocuses, although naturalistic designs were never used for
painted pottery before the M. M. I period. This need not cause
surprise, for in the development of all races the first artistic efforts
are devoted to objects of personal adornment rather than
to utilitarian purposes. The Minoan lady of all periods seems to
have devoted much attention to personal adornment and it was to
cater to her tastes that the earliest artistic efforts were directed.

The great importance of the Mochlos cemetery lies in the fact that
it shows the primitive Minoans under very different conditions from
those hitherto imagined. It will be seen that long before the
Middle Minoan palace walls were reared on the Kephala at Knossos,
the Minoans were a wealthy and prosperous people. Although we
have no absolute proof, it is probable that they had already entered
into communication with Egypt and had begun their career as a
great maritime power. Oddly enough this early period in Eastern
Crete was one of great prosperity, whereas in the succeeding M. M.
periods the eastern towns seemingly dropped back into insignificance.
At Knossos the reverse would appear to have been the case, but as
yet it is impossible to offer any explanation of this apparently