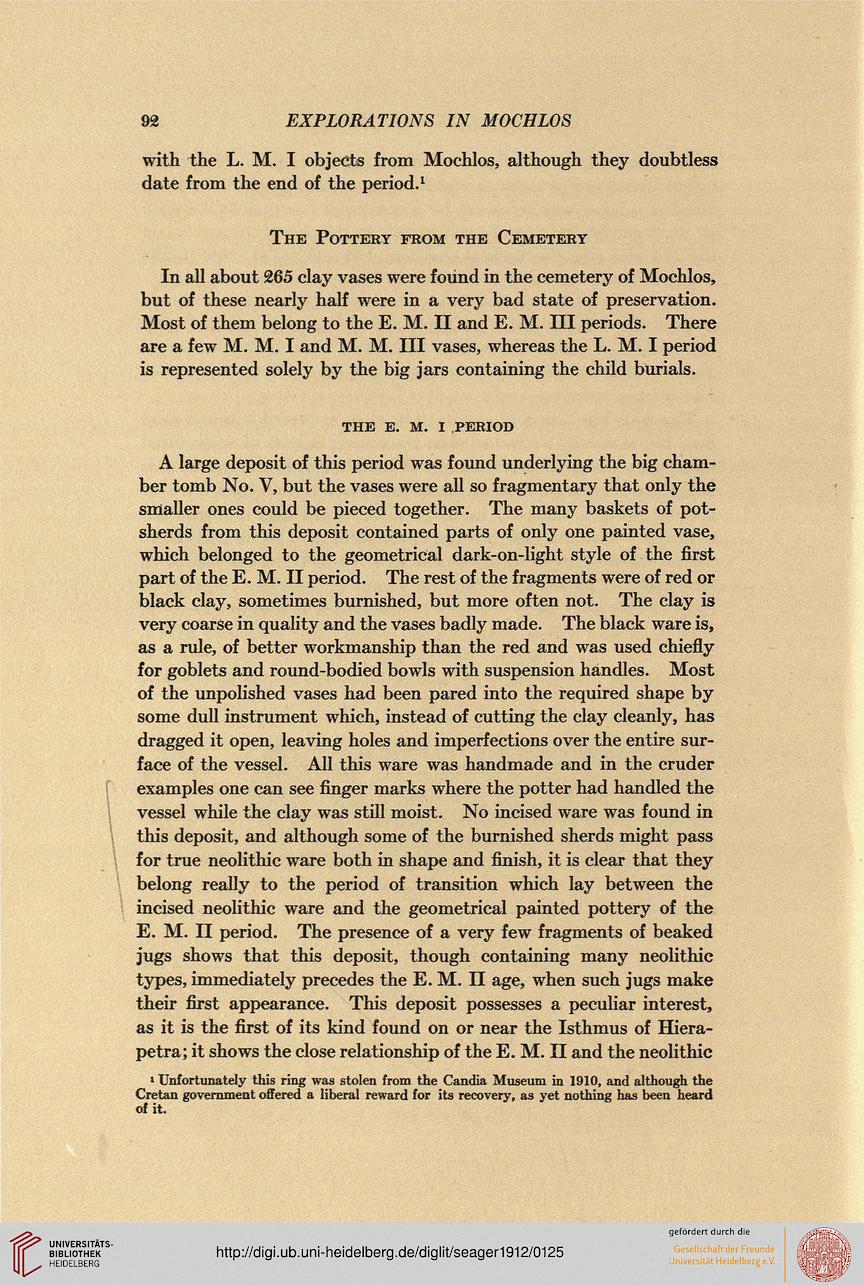 with the L. M. I objects from Mochlos, although they doubtless
date from the end of the period.1

The Potteky from the Cemetery

In all about 265 clay vases were found in the cemetery of Mochlos,
but of these nearly half were in a very bad state of preservation.
Most of them belong to the E. M. II and E. M. Ill periods. There
are a few M. M. I and M. M. Ill vases, whereas the L. M. I period
is represented solely by the big jars containing the child burials.

A large deposit of this period was found underlying the big cham-
ber tomb No. V, but the vases were all so fragmentary that only the
smaller ones could be pieced together. The many baskets of pot-
sherds from this deposit contained parts of only one painted vase,
which belonged to the geometrical dark-on-light style of the first
part of the E. M. II period. The rest of the fragments were of red or
black clay, sometimes burnished, but more often not. The clay is
very coarse in quality and the vases badly made. The black ware is,
as a rule, of better workmanship than the red and was used chiefly
for goblets and round-bodied bowls with suspension handles. Most
of the unpolished vases had been pared into the required shape by
some dull instrument which, instead of cutting the clay cleanly, has
dragged it open, leaving holes and imperfections over the entire sur-
face of the vessel. AH this ware was handmade and in the cruder
examples one can see finger marks where the potter had handled the
vessel while the clay was still moist. No incised ware was found in
this deposit, and although some of the burnished sherds might pass
for true neolithic ware both in shape and finish, it is clear that they
belong really to the period of transition which lay between the
incised neolithic ware and the geometrical painted pottery of the
E. M. II period. The presence of a very few fragments of beaked
jugs shows that this deposit, though containing many neolithic
types, immediately precedes the E. M. II age, when such jugs make
their first appearance. This deposit possesses a peculiar interest,
as it is the first of its kind found on or near the Isthmus of Hiera-
petra; it shows the close relationship of the E. M. II and the neolithic

»Unfortunately this ring was stolen from the Candia Museum in 1910, and although the
Cretan government offered a liberal reward for its recovery, as yet nothing has been heard
of it.