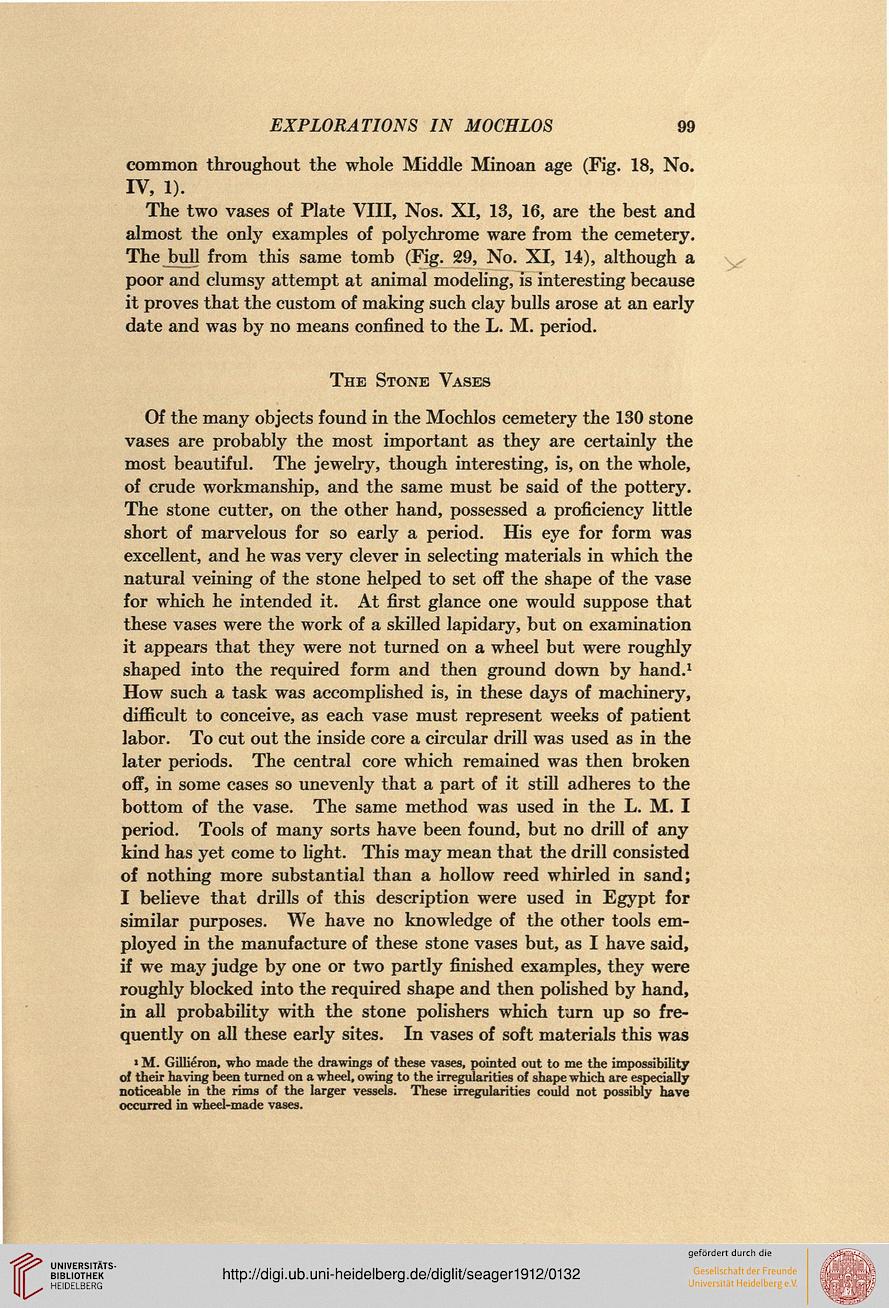 The two vases of Plate VIII, Nos. XI, 13, 16, are the best and
almost the only examples of polychrome ware from the cemetery.
The bull from this same tomb (Fig. 29, No. XI, 14), although a
poor and clumsy attempt at animal modeling, is interesting because
it proves that the custom of making such clay bulls arose at an early
date and was by no means confined to the L. M. period.

Of the many objects found in the Mochlos cemetery the 130 stone
vases are probably the most important as they are certainly the
most beautiful. The jewelry, though interesting, is, on the whole,
of crude workmanship, and the same must be said of the pottery.
The stone cutter, on the other hand, possessed a proficiency little
short of marvelous for so early a period. His eye for form was
excellent, and he was very clever in selecting materials in which the
natural veining of the stone helped to set off the shape of the vase
for which he intended it. At first glance one would suppose that
these vases were the work of a skilled lapidary, but on examination
it appears that they were not turned on a wheel but were roughly
shaped into the required form and then ground down by hand.1
How such a task was accomplished is, in these days of machinery,
difficult to conceive, as each vase must represent weeks of patient
labor. To cut out the inside core a circular drill was used as in the
later periods. The central core which remained was then broken
off, in some cases so unevenly that a part of it still adheres to the
bottom of the vase. The same method was used in the L. M. I
period. Tools of many sorts have been found, but no drill of any
kind has yet come to light. This may mean that the drill consisted
of nothing more substantial than a hollow reed whirled in sand;
I believe that drills of this description were used in Egypt for
similar purposes. We have no knowledge of the other tools em-
ployed in the manufacture of these stone vases but, as I have said,
if we may judge by one or two partly finished examples, they were
roughly blocked into the required shape and then polished by hand,
in all probability with the stone polishers which turn up so fre-
quently on all these early sites. In vases of soft materials this was

i M. Gillieron, who made the drawings of these vases, pointed out to me the impossibility
of their having been turned on a wheel, owing to the irregularities of shape which are especially
noticeable in the rims of the larger vessels. These irregularities could not possibly have
occurred in wheel-made vases.