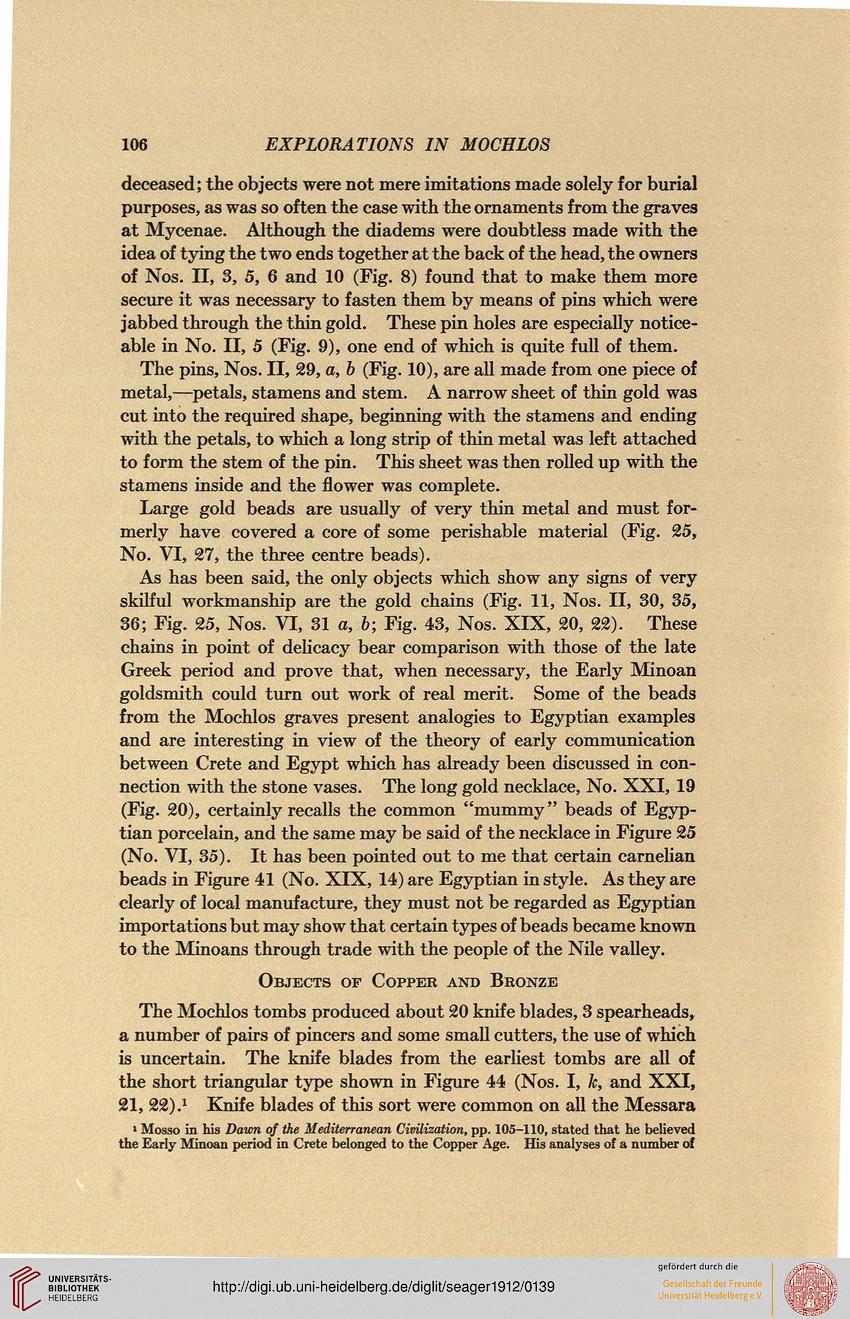 deceased; the objects were not mere imitations made solely for burial
purposes, as was so often the case with the ornaments from the graves
at Mycenae. Although the diadems were doubtless made with the
idea of tying the two ends together at the back of the head, the owners
of Nos. II, 3, 5, 6 and 10 (Fig. 8) found that to make them more
secure it was necessary to fasten them by means of pins which were
jabbed through the thin gold. These pin holes are especially notice-
able in No. II, 5 (Fig. 9), one end of which is quite full of them.

The pins, Nos. II, 29, a, b (Fig. 10), are all made from one piece of
metal,—petals, stamens and stem. A narrow sheet of thin gold was
cut into the required shape, beginning with the stamens and ending
with the petals, to which a long strip of thin metal was left attached
to form the stem of the pin. This sheet was then rolled up with the
stamens inside and the flower was complete.

Large gold beads are usually of very thin metal and must for-
merly have covered a core of some perishable material (Fig. 25,
No. VI, 27, the three centre beads).

As has been said, the only objects which show any signs of very
skilful workmanship are the gold chains (Fig. 11, Nos. II, 30, 35,
36; Fig. 25, Nos. VI, 31 a, b; Fig. 43, Nos. XIX, 20, 22). These
chains in point of delicacy bear comparison with those of the late
Greek period and prove that, when necessary, the Early Minoan
goldsmith could turn out work of real merit. Some of the beads
from the Mochlos graves present analogies to Egyptian examples
and are interesting in view of the theory of early communication
between Crete and Egypt which has already been discussed in con-
nection with the stone vases. The long gold necklace, No. XXI, 19
(Fig. 20), certainly recalls the common "mummy" beads of Egyp-
tian porcelain, and the same may be said of the necklace in Figure 25
(No. VI, 35). It has been pointed out to me that certain carnelian
beads in Figure 41 (No. XIX, 14) are Egyptian in style. As they are
clearly of local manufacture, they must not be regarded as Egyptian
importations but may show that certain types of beads became known
to the Minoans through trade with the people of the Nile valley.

Objects of Copper and Bronze

The Mochlos tombs produced about 20 knife blades, 3 spearheads,
a number of pairs of pincers and some small cutters, the use of which
is uncertain. The knife blades from the earliest tombs are all of
the short triangular type shown in Figure 44 (Nos. I, k, and XXI,
21, 22).J Knife blades of this sort were common on all the Messara

1 Mosso in his Dawn of the Mediterranean Civilization, pp. 105-110, stated that he believed
the Early Minoan period in Crete belonged to the Copper Age. His analyses of a number of