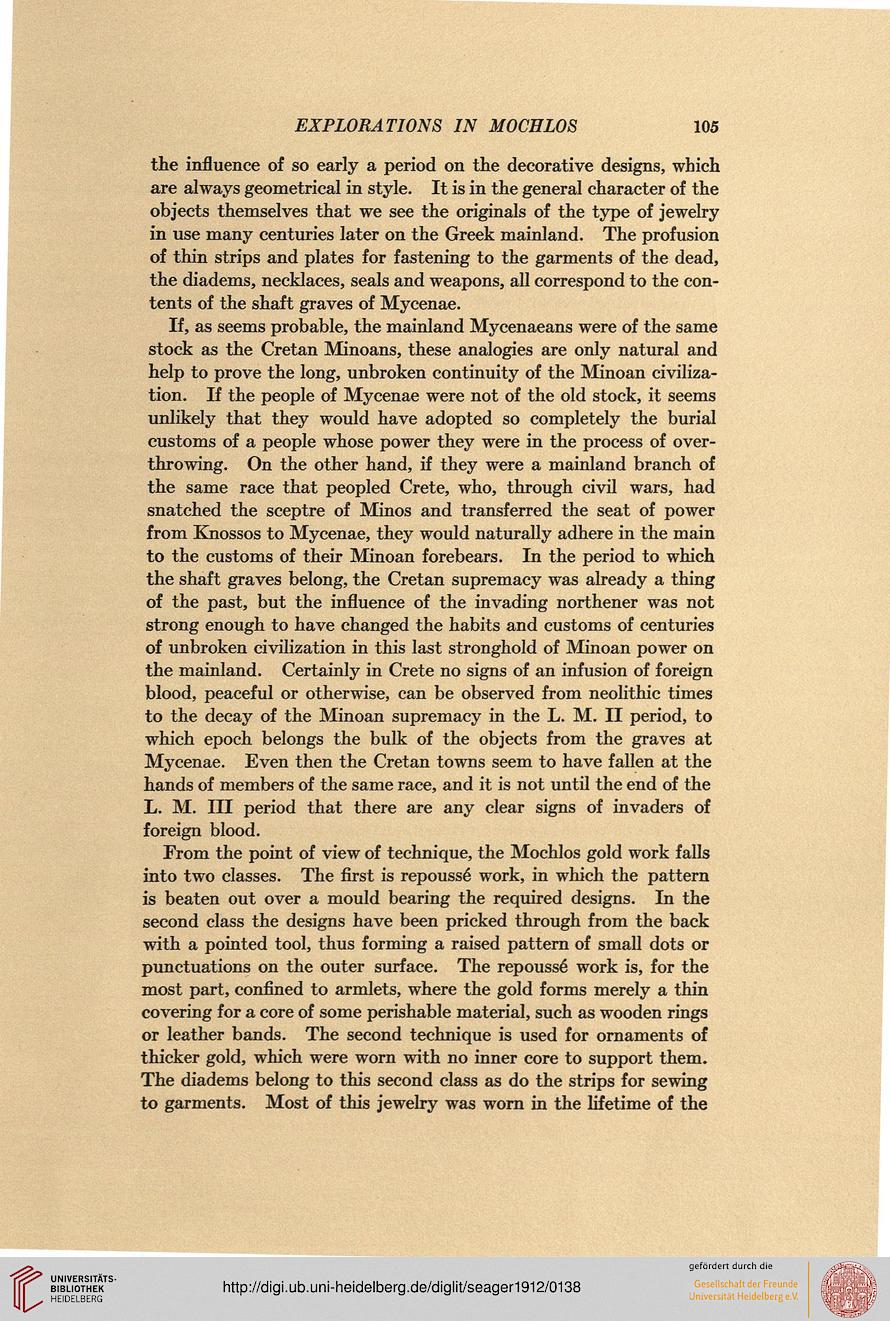 the influence of so early a period on the decorative designs, which
are always geometrical in style. It is in the general character of the
objects themselves that we see the originals of the type of jewelry
in use many centuries later on the Greek mainland. The profusion
of thin strips and plates for fastening to the garments of the dead,
the diadems, necklaces, seals and weapons, all correspond to the con-
tents of the shaft graves of Mycenae.

If, as seems probable, the mainland Mycenaeans were of the same
stock as the Cretan Minoans, these analogies are only natural and
help to prove the long, unbroken continuity of the Minoan civiliza-
tion. If the people of Mycenae were not of the old stock, it seems
unlikely that they would have adopted so completely the burial
customs of a people whose power they were in the process of over-
throwing. On the other hand, if they were a mainland branch of
the same race that peopled Crete, who, through civil wars, had
snatched the sceptre of Minos and transferred the seat of power
from Knossos to Mycenae, they would naturally adhere in the main
to the customs of their Minoan forebears. In the period to which
the shaft graves belong, the Cretan supremacy was already a thing
of the past, but the influence of the invading northener was not
strong enough to have changed the habits and customs of centuries
of unbroken civilization in this last stronghold of Minoan power on
the mainland. Certainly in Crete no signs of an infusion of foreign
blood, peaceful or otherwise, can be observed from neolithic times
to the decay of the Minoan supremacy in the L. M. II period, to
which epoch belongs the bulk of the objects from the graves at
Mycenae. Even then the Cretan towns seem to have fallen at the
hands of members of the same race, and it is not until the end of the
L. M. Ill period that there are any clear signs of invaders of
foreign blood.

From the point of view of technique, the Mochlos gold work falls
into two classes. The first is repousse work, in which the pattern
is beaten out over a mould bearing the required designs. In the
second class the designs have been pricked through from the back
with a pointed tool, thus forming a raised pattern of small dots or
punctuations on the outer surface. The repousse work is, for the
most part, confined to armlets, where the gold forms merely a thin
covering for a core of some perishable material, such as wooden rings
or leather bands. The second technique is used for ornaments of
thicker gold, which were worn with no inner core to support them.
The diadems belong to this second class as do the strips for sewing
to garments. Most of this jewelry was worn in the lifetime of the