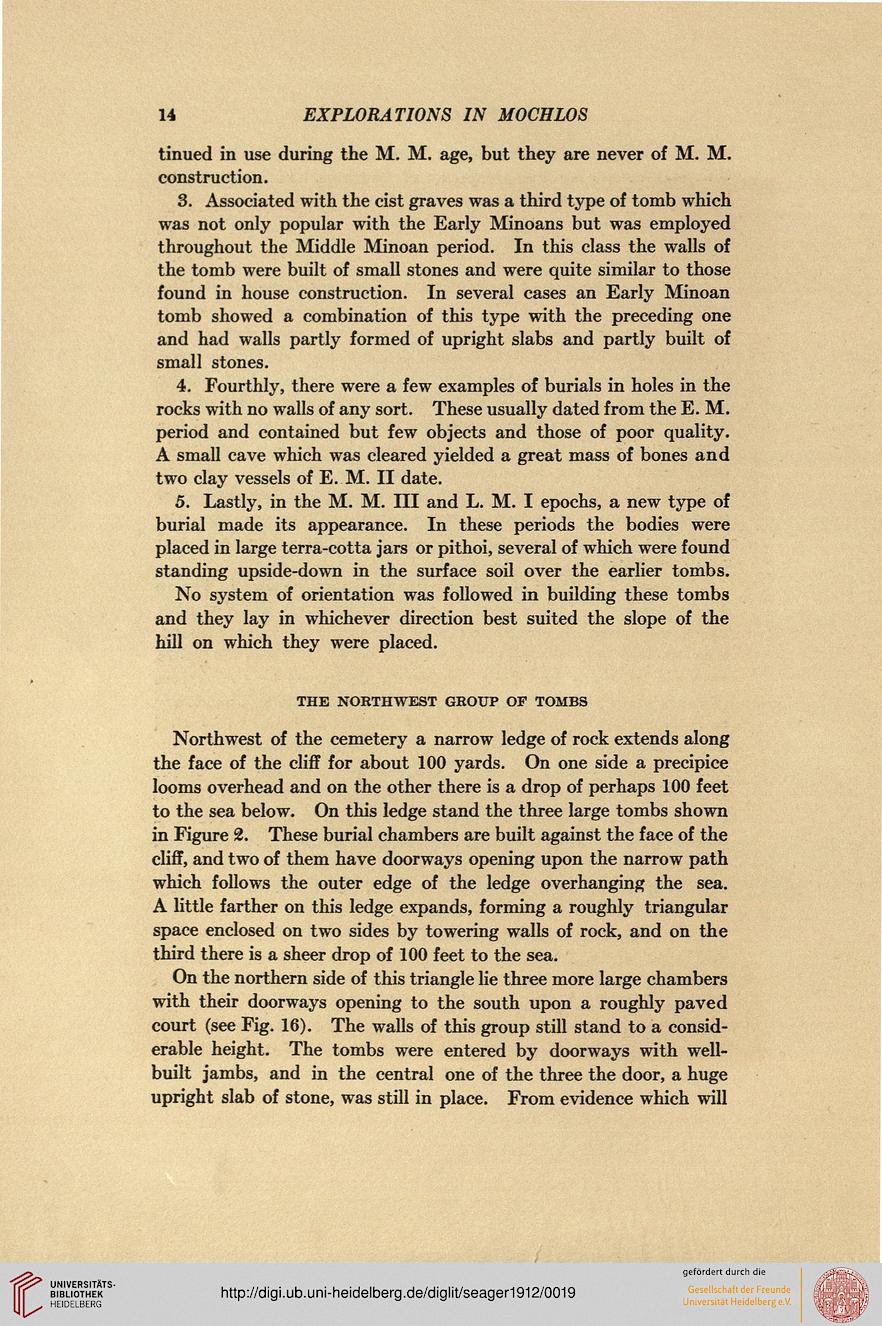 tinued in use during the M. M. age, but they are never of M. M.
construction.

3. Associated with the cist graves was a third type of tomb which
was not only popular with the Early Minoans but was employed
throughout the Middle Minoan period. In this class the walls of
the tomb were built of small stones and were quite similar to those
found in house construction. In several cases an Early Minoan
tomb showed a combination of this type with the preceding one
and had walls partly formed of upright slabs and partly built of
small stones.

4. Fourthly, there were a few examples of burials in holes in the
rocks with no walls of any sort. These usually dated from the E. M.
period and contained but few objects and those of poor quality.
A small cave which was cleared yielded a great mass of bones and
two clay vessels of E. M. II date.

5. Lastly, in the M. M. Ill and L. M. I epochs, a new type of
burial made its appearance. In these periods the bodies were
placed in large terra-cotta jars or pithoi, several of which were found
standing upside-down in the surface soil over the earlier tombs.

No system of orientation was followed in building these tombs
and they lay in whichever direction best suited the slope of the
hill on which they were placed.

THE NORTHWEST GHOUP OF TOMBS

Northwest of the cemetery a narrow ledge of rock extends along
the face of the cliff for about 100 yards. On one side a precipice
looms overhead and on the other there is a drop of perhaps 100 feet
to the sea below. On this ledge stand the three large tombs shown
in Figure 2. These burial chambers are built against the face of the
cliff, and two of them have doorways opening upon the narrow path
which follows the outer edge of the ledge overhanging the sea.
A little farther on this ledge expands, forming a roughly triangular
space enclosed on two sides by towering walls of rock, and on the
third there is a sheer drop of 100 feet to the sea.

On the northern side of this triangle he three more large chambers
with their doorways opening to the south upon a roughly paved
court (see Fig. 16). The walls of this group still stand to a consid-
erable height. The tombs were entered by doorways with well-
built jambs, and in the central one of the three the door, a huge
upright slab of stone, was still in place. From evidence which will