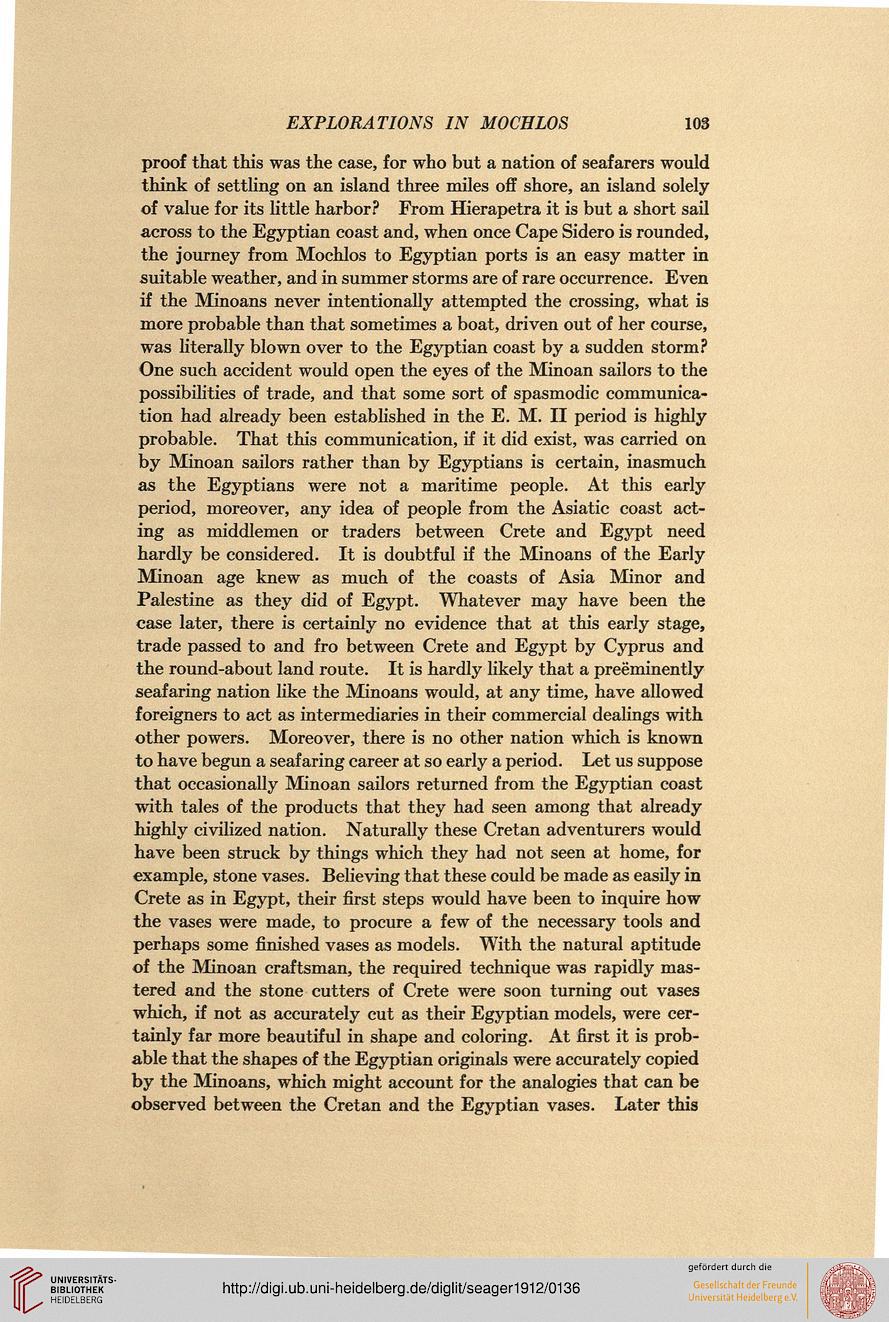 proof that this was the case, for who but a nation of seafarers would
think of settling on an island three miles off shore, an island solely
of value for its little harbor? From Hierapetra it is but a short sail
across to the Egyptian coast and, when once Cape Sidero is rounded,
the journey from Mochlos to Egyptian ports is an easy matter in
suitable weather, and in summer storms are of rare occurrence. Even
if the Minoans never intentionally attempted the crossing, what is
more probable than that sometimes a boat, driven out of her course,
was literally blown over to the Egyptian coast by a sudden storm?
One such accident would open the eyes of the Minoan sailors to the
possibilities of trade, and that some sort of spasmodic communica-
tion had already been established in the E. M. II period is highly
probable. That this communication, if it did exist, was carried on
by Minoan sailors rather than by Egyptians is certain, inasmuch
as the Egyptians were not a maritime people. At this early
period, moreover, any idea of people from the Asiatic coast act-
ing as middlemen or traders between Crete and Egypt need
hardly be considered. It is doubtful if the Minoans of the Early
Minoan age knew as much of the coasts of Asia Minor and
Palestine as they did of Egypt. Whatever may have been the
case later, there is certainly no evidence that at this early stage,
trade passed to and fro between Crete and Egypt by Cyprus and
the round-about land route. It is hardly likely that a preeminently
seafaring nation like the Minoans would, at any time, have allowed
foreigners to act as intermediaries in their commercial dealings with
other powers. Moreover, there is no other nation which is known
to have begun a seafaring career at so early a period. Let us suppose
that occasionally Minoan sailors returned from the Egyptian coast
with tales of the products that they had seen among that already
highly civilized nation. Naturally these Cretan adventurers would
have been struck by things which they had not seen at home, for
example, stone vases. Believing that these could be made as easily in
Crete as in Egypt, their first steps would have been to inquire how
the vases were made, to procure a few of the necessary tools and
perhaps some finished vases as models. With the natural aptitude
of the Minoan craftsman, the required technique was rapidly mas-
tered and the stone cutters of Crete were soon turning out vases
which, if not as accurately cut as their Egyptian models, were cer-
tainly far more beautiful in shape and coloring. At first it is prob-
able that the shapes of the Egyptian originals were accurately copied
by the Minoans, which might account for the analogies that can be
observed between the Cretan and the Egyptian vases. Later this