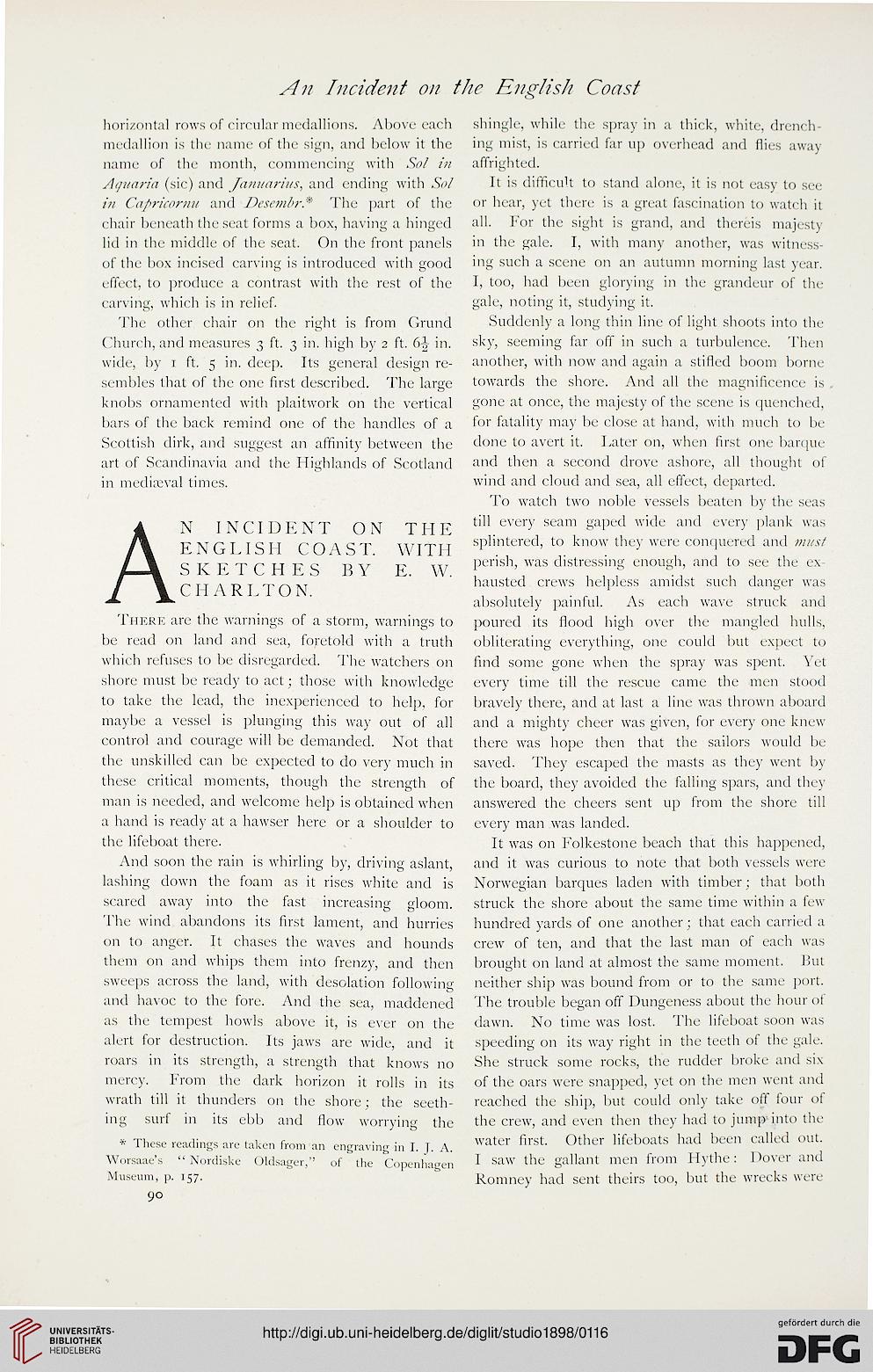 Information about OCR text
A]i Incident on the English Coast

horizontal rows of circular medallions. Above each
medallion is the name of the sign, and below it the
name of the month, commencing with Sol hi
Aguaria (sic) and /anuarius, and ending with Sol
in Capricornu and Desembr* The part of the
chair beneath the scat forms a box, having a hinged
lid in the middle of the seat. On the front panels
of the box incised carving is introduced with good
effect, to produce a contrast with the rest of the
carving, which is in relief.

The other chair on the right is from Grand
Church, and measures 3 ft. 3 in. high by 2 ft. 6h in.
wide, by t ft. 5 in. deep. Its general design re-
sembles that of the one first described. The large
knobs ornamented with plaitwork on the vertical
bars of the back remind one of the handles of a
Scottish dirk, and suggest an affinity between the
art of Scandinavia and the Highlands of Scotland
in mediaeval times.

AN INCIDENT ON THE
ENGLISH COAST. WITH
SKETCHES B Y E. W.
CHARLTON.

There are the warnings of a storm, warnings to
be read on land and sea, foretold with a truth
which refuses to be disregarded. The watchers on
shore must be ready to act; those with knowledge
to take the lead, the inexperienced to help, for
maybe a vessel is plunging this way out of all
control and courage will be demanded. Not that
the unskilled can be expected to do very much in
these critical moments, though the strength of
man is needed, and welcome help is obtained when
a hand is ready at a hawser here or a shoulder to
the lifeboat there.

And soon the rain is whirling by, driving aslant,
lashing down the foam as it rises white and is
scared away into the fast increasing gloom.
The wind abandons its first lament, and hurries
on to anger. It chases the waves and hounds
them on and whips them into frenzy, and then
sweeps across the land, with desolation following
and havoc to the fore. And the sea, maddened
as the tempest howls above it, is ever on the
alert for destruction. Its jaws are wide, and it
its strcn^thj t\ sli

ength that knows no
mercy. From the dark horizon it rolls in its
wrath till it thunders on the shore; the seeth-
ing surf in its ebb and flow worrying the

shingle, while the spray in a thick, white,-, drench
ing mist, is carried far up overhead and flies away
affrighted.

It is difficult to stand alone, it is not easy to
or hear, yet there is a great fascination to watch it
all. For the sight is grand, and thereis majesty
in the gale. I, with many another, was witness-
ing such a scene on an autumn morning last year.
I, too, had been glorying in the grandeur of the
gale, noting it, studying it.

Suddenly a long thin line of light shoots into the
sky, seeming far off in such a turbulence. Then
another, with now and again a stifled boom borne
towards the shore. And all the magnificence is
gone at once, the majesty of the scene is quenched,
for fatality may be close at hand, with much to be
done to avert it. Later on, when first one barque
and then a second drove ashore, all thought of
wind and cloud and sea, all effect, departed.

To watch two noble vessels beaten by the seas
till every seam gaped wide and ever)- plank was
splintered, to know the)' were conquered and must
perish, was distressing enough, and to see the ex
hausted crews helpless amidst such danger was
absolutely painful. As each wave struck and
poured its flood high over the mangled hulls,
obliterating everything, one could but expect to
find some gone when the spray was spent. Yet
every time till the rescue came the men stood
bravely there, and at last a line was thrown aboard
and a mighty cheer was given, for every one knew
there was hope then that the sailors would be
saved. They escaped the masts as the)' went by
the board, they avoided the falling spars, and they
answered the cheers sent up from the shore till
every man was landed.

It was on Folkestone beach that this happened,
and it was curious to note that both vessels were
Norwegian barques laden with timber; that both
struck the shore about the same time within a few
hundred yards of one another ; that each carried a
crew of ten, and that the last man of each was
brought on land at almost the same moment. But
neither ship was bound from or to the same port.
The trouble began off Dungeness about the hour of
dawn. No time was lost. The lifeboat soon was
speeding on its way right in the teeth of the gale.
She struck some rocks, the rudder broke and six
of the oars were snapped, yet on the men went and
reached the ship, but could only take off four of
the crew, and even then they had to jump into the
water first. Other lifeboats had been called out.
I saw the gallant men from Hythe: Dover and
Romney had sent theirs too, but the wrecks were