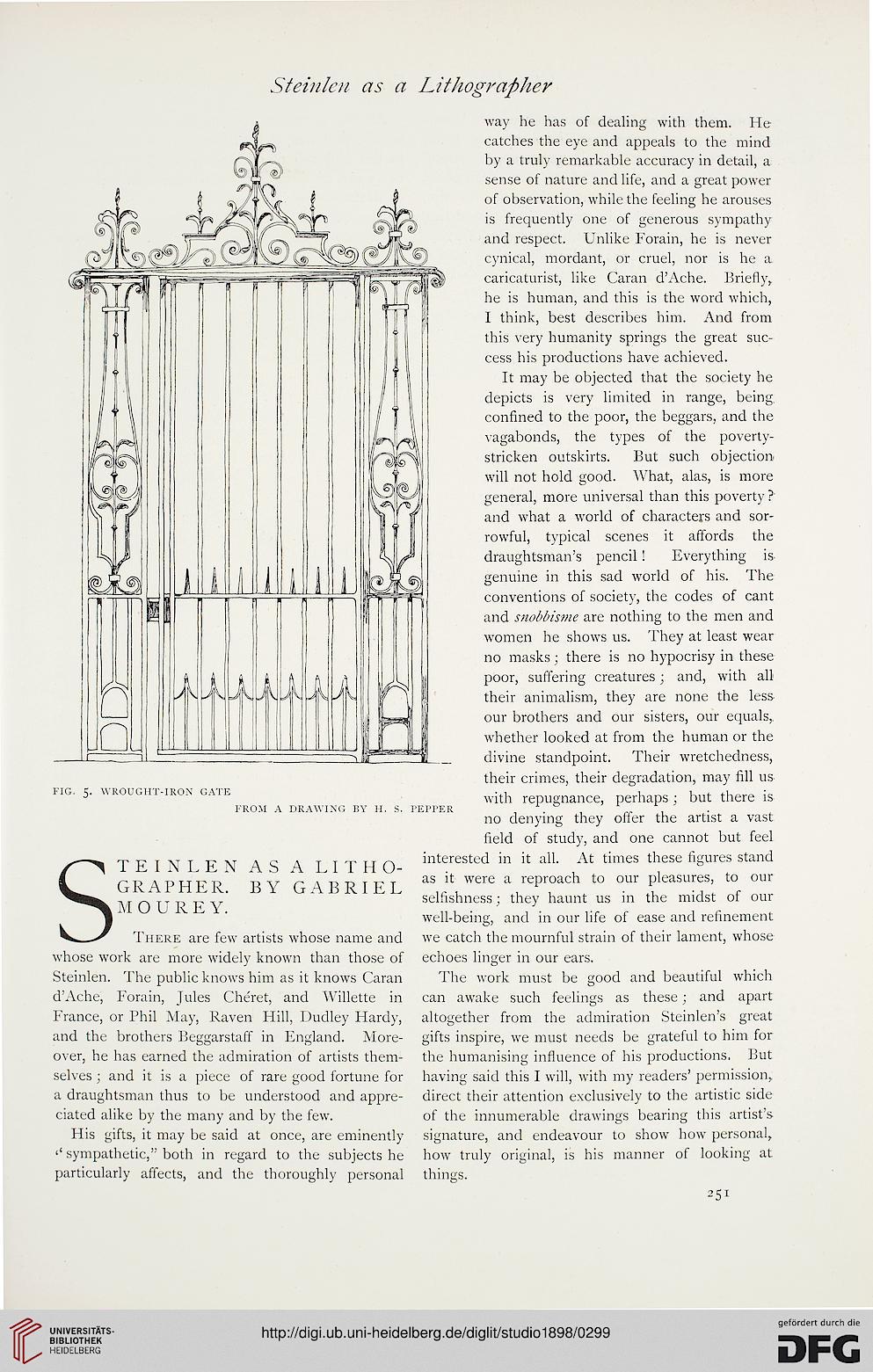 Information about OCR text
Steinlen as a Lithographer

way he has of dealing with them. He
catches the eye and appeals to the mind
by a truly remarkable accuracy in detail, a
sense of nature and life, and a great power
of observation, while the feeling he arouses
is frequently one of generous sympathy
and respect. Unlike Forain, he is never
cynical, mordant, or cruel, nor is he a
caricaturist, like Caran d'Ache. Briefly,
he is human, and this is the word which,
I think, best describes him. And from
this very humanity springs the great suc-
cess his productions have achieved.

It may be objected that the society he
depicts is very limited in range, being,
confined to the poor, the beggars, and the
vagabonds, the types of the poverty-
stricken outskirts. But such objection
will not hold good. What, alas, is more
general, more universal than this poverty ?'
and what a world of characters and sor-
rowful, typical scenes it affords the
draughtsman's pencil ! Everything is.
genuine in this sad world of his. The
conventions of society, the codes of cant
and snobbisme are nothing to the men and
women he shows us. They at least wear
no masks; there is no hypocrisy in these
poor, suffering creatures ; and, with all
their animalism, they are none the less-
our brothers and our sisters, our equals,,
whether looked at from the human or the
divine standpoint. Their wretchedness,
their crimes, their degradation, may fill us
with repugnance, perhaps; but there is
no denying they offer the artist a vast
field of study, and one cannot but feel
TEIXLEN AS A LITHO interested in it all. At times these figures stand

MOUREY selfishness; they haunt us in the midst ot our

well-being, and in our life of ease and refinement

There are few artists whose name and we catch the mournful strain of their lament, whose

whose work are more widely known than those of echoes linger in our ears.

Steinlen. The public knows him as it knows Caran The work must be good and beautiful which

d'Ache, Forain, Jules Cheret, and Willette in can awake such feelings as these; and apart

and the brothers Beggarstaff in England. More- gifts inspire, we must needs be grateful to him for

over, he has earned the admiration of artists them- the humanising influence of his productions. But

selves ; and it is a piece of rare good fortune for having said this I will, with my readers' permission,,

ciated alike by the many and by the few. of the innumerable drawings bearing this artist's

His gifts, it may be said at once, are eminently signature, and endeavour to show how personal,

'' sympathetic," both in regard to the subjects he how truly original, is his manner of looking at

FROM A DRAWING BY H. S. PEPPER