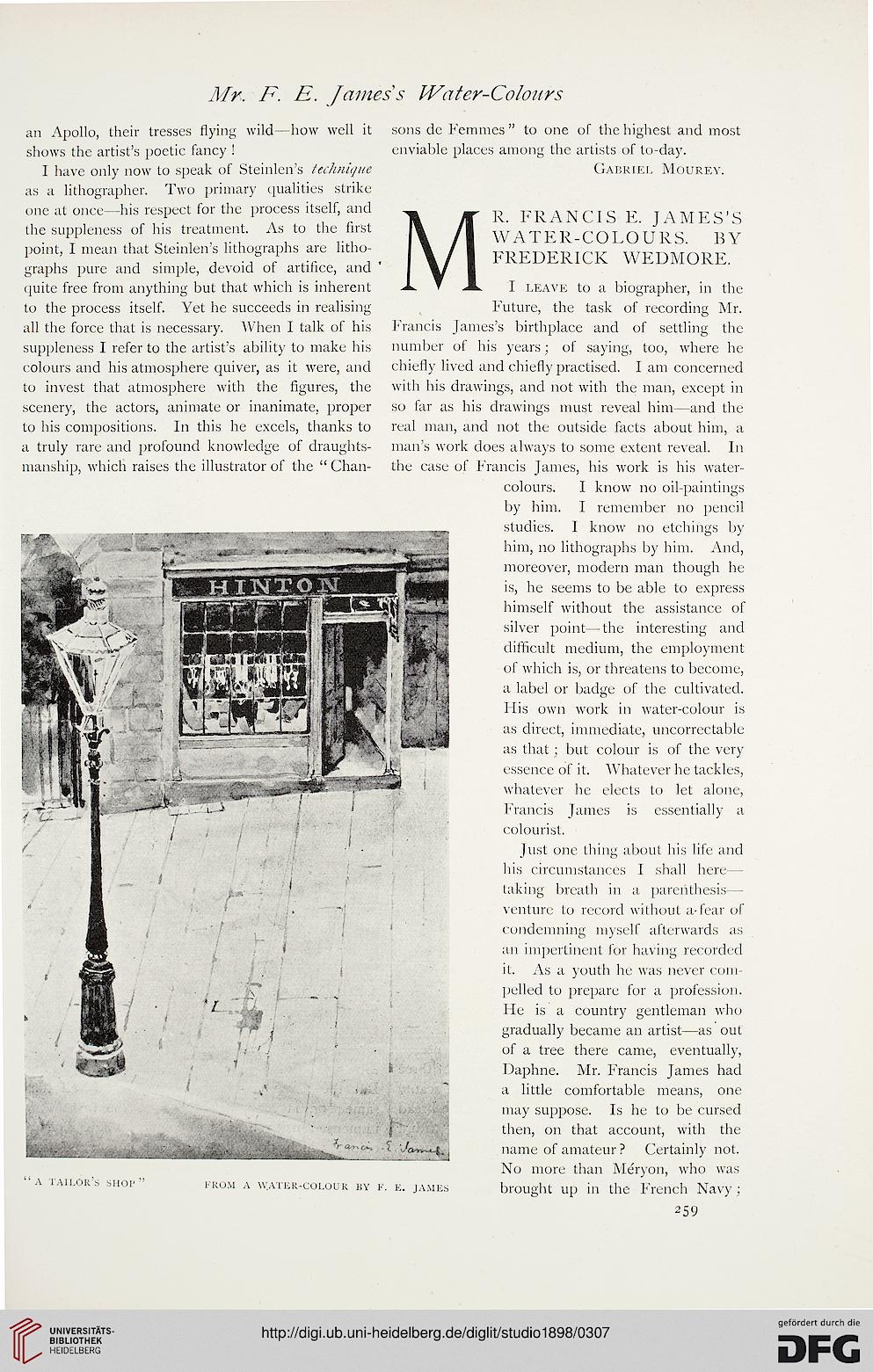 an Apollo, their tresses flying wild—how well it sons de Femmes " to one of the highest and most
shows the artist's poetic fancy ! enviable places among the artists of to-day.

I have only now to speak of Steinlen's technique Gabriel Mourey.

one at once—his respect for the process itself, and _ ^ FRANCIS E T AMES'S

the suppleness of his treatment. As to the first A Jl WATER-COLOURS. BY
pent, I mean that Stemlens hthographs are htho- I \ / I FREDERICK WEDMORE.
graphs pure and simple, devoid ot artifice, and I m# I

quite free from anything but that which is inherent X T A I leave to a biographer, in the
to the process itself. Yet he succeeds in realising Future, the task of recording Mr.

all the force that is necessary. When I talk of his Francis James's birthplace and of settling the
suppleness I refer to the artist's ability to make his number of his years; of saying, too, where he
colours and his atmosphere quiver, as it were, and chiefly lived and chiefly practised. I am concerned
to invest that atmosphere with the figures, the with his drawings, and not with the man, except in
scenery, the actors, animate or inanimate, proper so far as his drawings must reveal him—and the
to his compositions. In this he excels, thanks to real man, and not the outside facts about him, a
a truly rare and profound knowledge of draughts- man's work does always to some extent reveal. In
manship, which raises the illustrator of the " Chan- the case of Francis James, his work is his water-
colours. I know no oil-paintings
by him. I remember no pencil
studies. I know no etchings by
him, no lithographs by him. And,
moreover, modern man though he
is, he seems to be able to express
himself without the assistance of
silver point—the interesting and
difficult medium, the employment
of which is, or threatens to become,
a label or badge of the cultivated.
His own work in water-colour is
as direct, immediate, uncorrectable
as that; but colour is of the very
essence of it. Whatever he tackles,
whatever he elects to let alone,
Francis James is essentially a
colourist.

Just one thing about his life and
his circumstances I shall here-
taking breath in a parenthesis—■
venture to record without a-fear of
condemning myself afterwards as
an impertinent for having recorded
it. As a youth he was never com-
pelled to prepare for a profession.
He is a country gentleman who
gradually became an artist—as out
of a tree there came, eventually,
Daphne. Mr. Francis James had
a little comfortable means, one
may suppose. Is he to be cursed
then, on that account, with the
***** j. name of amateur ? Certainly not.

No more than Meryon, who was
a tailor's shop" from a water-colour by f. e. ja.mes brought up in the French Navy ;