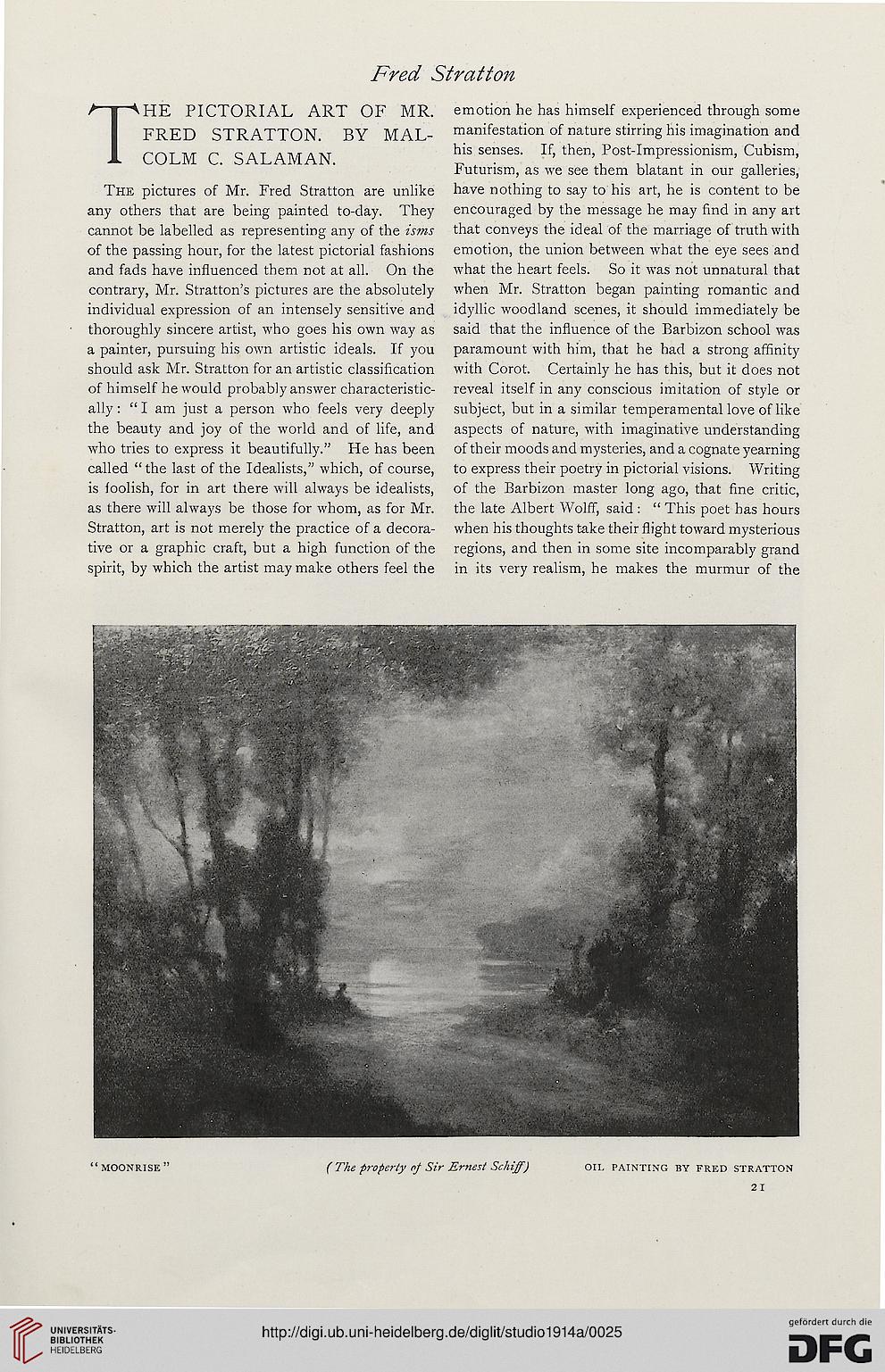 emotion he has himself experienced through some
manifestation of nature stirring his imagination and
his senses. If, then, Post-Impressionism, Cubism,
Futurism, as we see them blatant in our galleries,
have nothing to say to his art, he is content to be
encouraged by the message he may find in any art
that conveys the ideal of the marriage of truth with
emotion, the union between what the eye sees and
what the heart feels. So it was not unnatural that
when Mr. Stratton began painting romantic and
idyllic woodland scenes, it should immediately be
said that the influence of the Barbizon school was
paramount with him, that he had a strong affinity
with Corot. Certainly he has this, but it does not
reveal itself in any conscious imitation of style or
subject, but in a similar temperamental love of like
aspects of nature, with imaginative understanding
of their moods and mysteries, and a cognate yearning
to express their poetry in pictorial visions. Writing
of the Barbizon master long ago, that fine critic,
the late Albert Wolff, said : " This poet has hours
when his thoughts take their flight toward mysterious
regions, and then in some site incomparably grand
in its very realism, he makes the murmur of the

The pictures of Mr. Fred Stratton are unlike
any others that are being painted to-day. They
cannot be labelled as representing any of the isms
of the passing hour, for the latest pictorial fashions
and fads have influenced them not at all. On the
contrary, Mr. Stratton's pictures are the absolutely
individual expression of an intensely sensitive and
thoroughly sincere artist, who goes his own way as
a painter, pursuing his own artistic ideals. If you
should ask Mr. Stratton for an artistic classification
of himself he would probably answer characteristic-
ally : " I am just a person who feels very deeply
the beauty and joy of the world and of life, and
who tries to express it beautifully." He has been
called "the last of the Idealists," which, of course,
is foolish, for in art there will always be idealists,
as there will always be those for whom, as for Mr.
Stratton, art is not merely the practice of a decora-
tive or a graphic craft, but a high function of the
spirit, by which the artist may make others feel the

( The property of Sir Ernest Schiff)