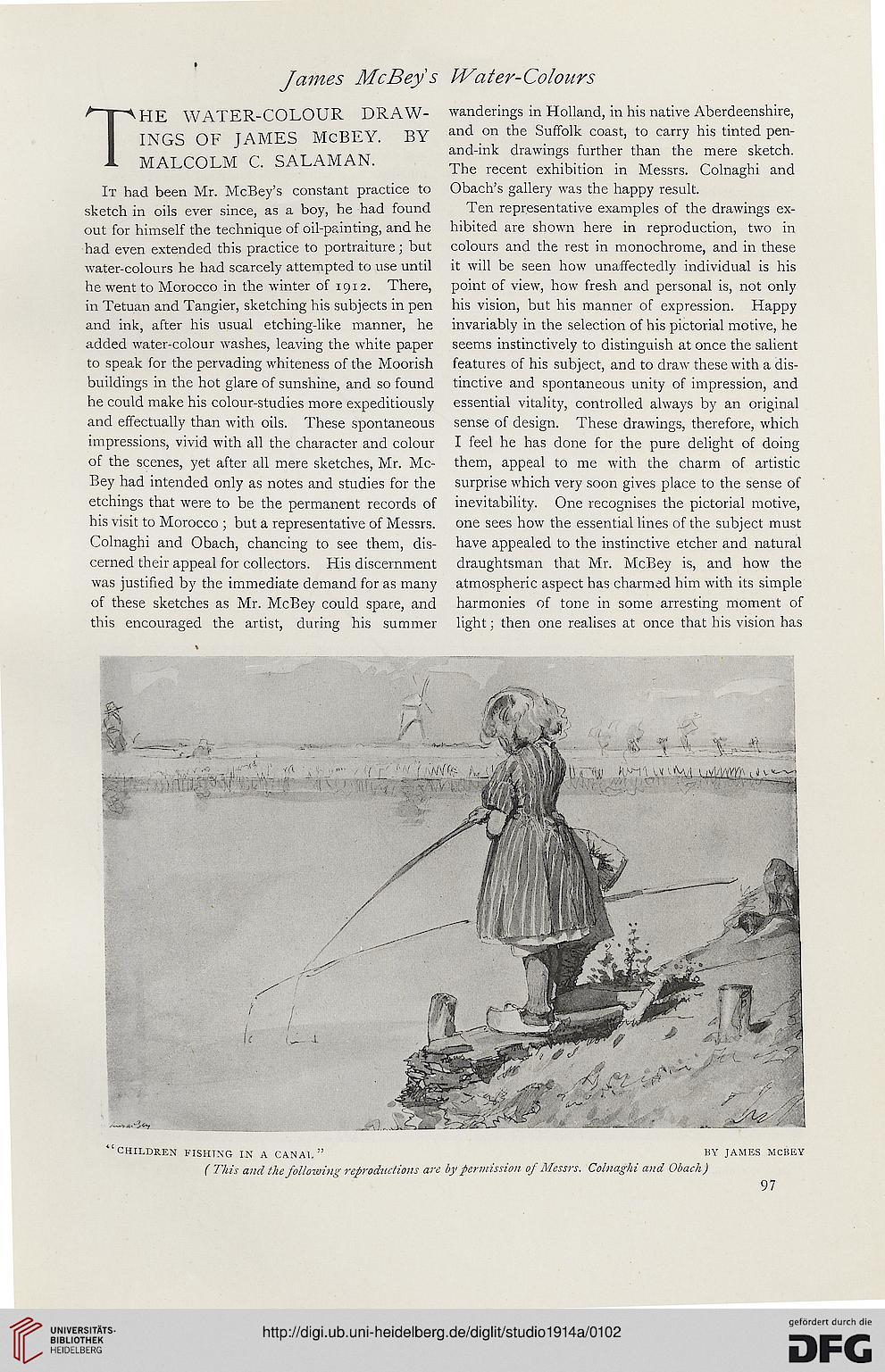 HE WATER-COLOUR DRAW- wanderings in Holland, in his native Aberdeenshire,
IATGS OF TAMES McBEY BY an<^ on t^le Suffolk coast, to carry his tinted pen-
and-ink drawings further than the mere sketch.
The recent exhibition in Messrs. Colnaghi and

It had been Mr. McBey's constant practice to Obach's gallery was the happy result,
sketch in oils ever since, as a boy, he had found Ten representative examples of the drawings ex-
out for himself the technique of oil-painting, and he hibited are shown here in reproduction, two in
had even extended this practice to portraiture; but colours and the rest in monochrome, and in these
water-colours he had scarcely attempted to use until it will be seen how unaffectedly individual is his
he went to Morocco in the winter of 1912. There, point of view, how fresh and personal is, not only
in Tetuan and Tangier, sketching his subjects in pen his vision, but his manner of expression. Happy
and ink, after his usual etching-like manner, he invariably in the selection of his pictorial motive, he
added water-colour washes, leaving the white paper seems instinctively to distinguish at once the salient
to speak for the pervading whiteness of the Moorish features of his subject, and to draw these with a dis-
buildings in the hot glare of sunshine, and so found tinctive and spontaneous unity of impression, and
he could make his colour-studies more expeditiously essential vitality, controlled always by an original
and effectually than with oils. These spontaneous sense of design. These drawings, therefore, which
impressions, vivid with all the character and colour I feel he has done for the pure delight of doing
of the scenes, yet after all mere sketches, Mr. Mc- them, appeal to me with the charm of artistic
Bey had intended only as notes and studies for the surprise which very soon gives place to the sense of
etchings that were to be the permanent records of inevitability. One recognises the pictorial motive,
his visit to Morocco ; but a representative of Messrs. one sees how the essential lines of the subject must
Colnaghi and Obach, chancing to see them, dis- have appealed to the instinctive etcher and natural
cerned their appeal for collectors. His discernment draughtsman that Mr. McBey is, and how the
was justified by the immediate demand for as many atmospheric aspect has charmed him with its simple
of these sketches as Mr. McBey could spare, and harmonies of tone in some arresting moment of
this encouraged the artist, during his summer light; then one realises at once that his vision has

( This and the following reproductions are by permission of Messrs. Colnaghi and Obach)