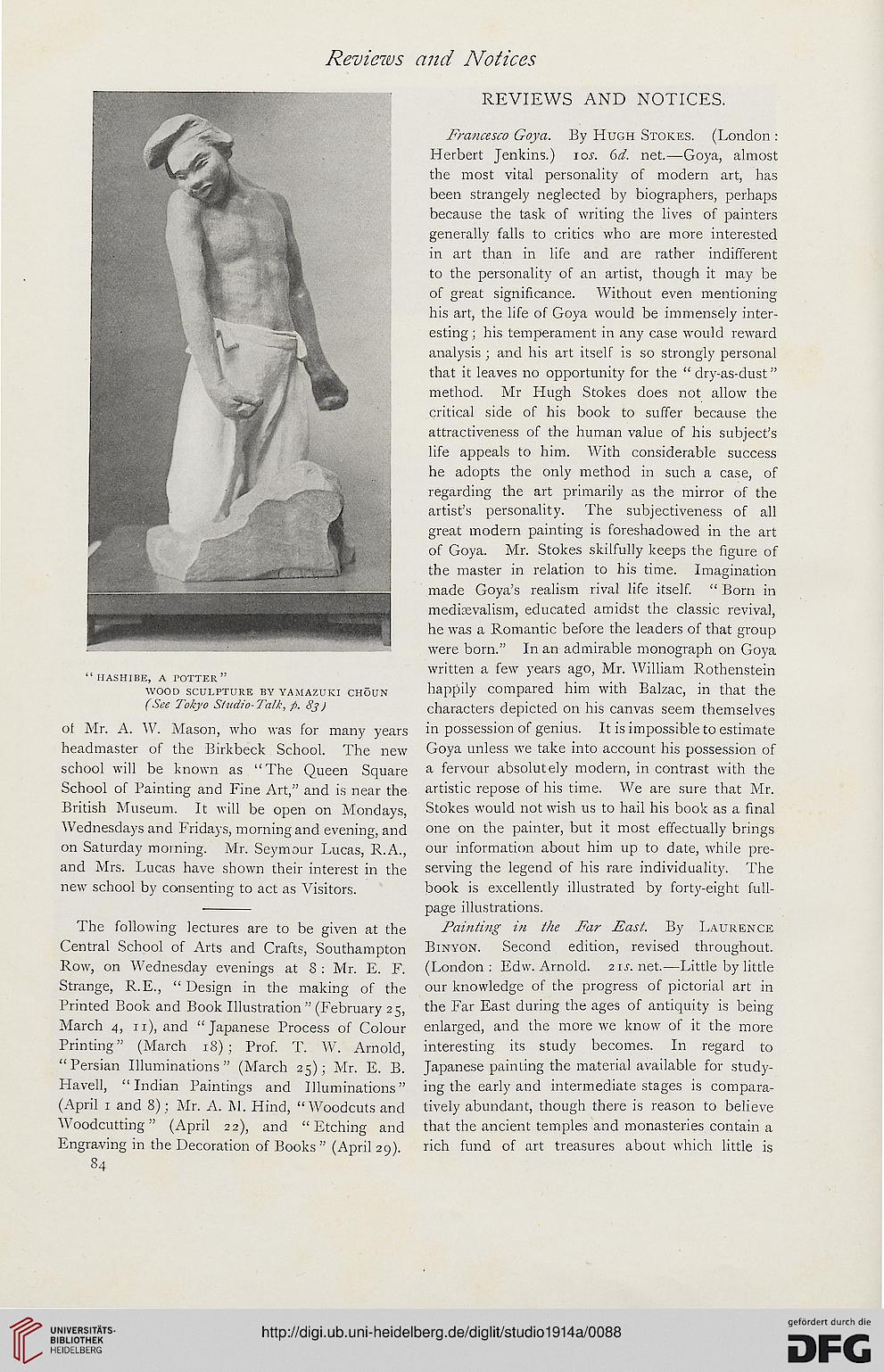 ot Mr. A. W. Mason, who was for many years
headmaster of the Birkbeck School. The new
school will be known as "The Queen Square
School of Painting and Fine Art," and is near the
British Museum. It will be open on Mondays,
Wednesdays and Fridays, morning and evening, and
on Saturday morning. Mr. Seymour Lucas, R.A.,
and Mrs. Lucas have shown their interest in the
new school by consenting to act as Visitors.

The following lectures are to be given at the
Central School of Arts and Crafts, Southampton
Row, on Wednesday evenings at S : Mr. E. F.
Strange, R.E., "Design in the making of the
Printed Book and Book Illustration " (February 25,
March 4, 11), and "Japanese Process of Colour
Printing" (March 18); Prof. T. W. Arnold,
"Persian Illuminations" (March 25); Mr. E. B.
Havell, "Indian Paintings and Illuminations"
(April 1 and 8); Mr. A. M. Hind, "Woodcuts and
Woodcutting" (April 22), and "Etching and
Engraving in the Decoration of Books " (April 29).
84

Francesco Goya. By Hugh Stokes. (London :
Herbert Jenkins.) 10s. 6d. net.—Goya, almost
the most vital personality of modern art, has
been strangely neglected by biographers, perhaps
because the task of writing the lives of painters
generally falls to critics who are more interested
in art than in life and are rather indifferent
to the personality of an artist, though it may be
of great significance. Without even mentioning
his art, the life of Goya would be immensely inter-
esting ; his temperament in any case would reward
analysis ; and his art itself is so strongly personal
that it leaves no opportunity for the " dry-as-dust"
method. Mr Hugh Stokes does not allow the
critical side of his book to suffer because the
attractiveness of the human value of his subject's
life appeals to him. With considerable success
he adopts the only method in such a case, of
regarding the art primarily as the mirror of the
artist's personality. The subjectiveness of all
great modern painting is foreshadowed in the art
of Goya. Mr. Stokes skilfully keeps the figure of
the master in relation to his time. Imagination
made Goya's realism rival life itself. " Born in
medievalism, educated amidst the classic revival,
he was a Romantic before the leaders of that group
were born." In an admirable monograph on Goya
written a few years ago, Mr. William Rothenstein
happily compared him with Balzac, in that the
characters depicted on his canvas seem themselves
in possession of genius. It is impossible to estimate
Goya unless we take into account his possession of
a fervour absolutely modern, in contrast with the
artistic repose of his time. We are sure that Mr.
Stokes would not wish us to hail his book as a final
one on the painter, but it most effectually brings
our information about him up to date, while pre-
serving the legend of his rare individuality. The
book is excellently illustrated by forty-eight full-
page illustrations.

Painting in the Far East. By Laurence
Binyon. Second edition, revised throughout.
(London : Edw. Arnold. 21.c net.—Little by little
our knowledge of the progress of pictorial art in
the Far East during the ages of antiquity is being
enlarged, and the more we know of it the more
interesting its study becomes. In regard to
Japanese painting the material available for study-
ing the early and intermediate stages is compara-
tively abundant, though there is reason to believe
that the ancient temples and monasteries contain a
rich fund of art treasures about which little is