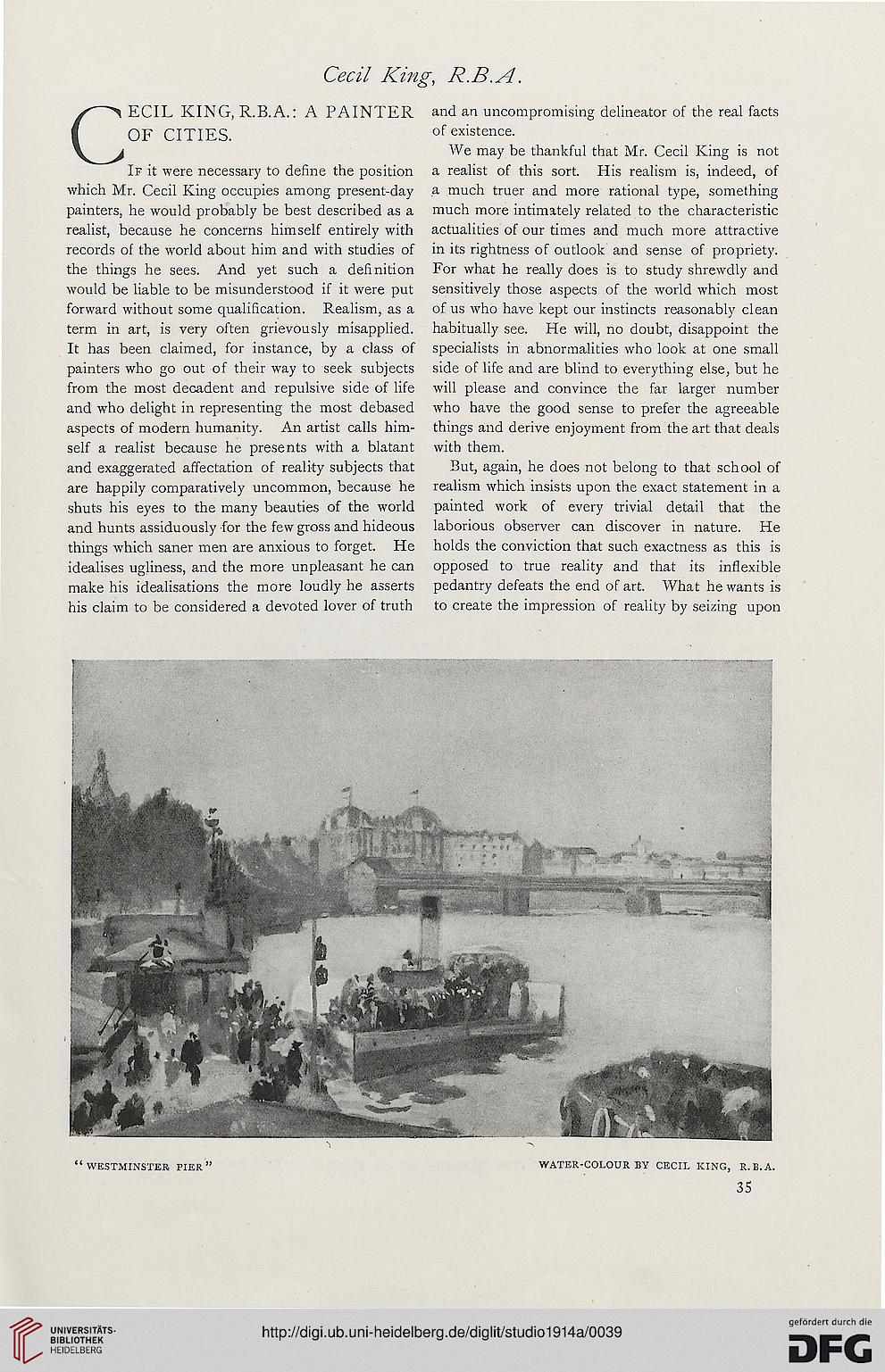 If it were necessary to define the position
which Mr. Cecil King occupies among present-day
painters, he would probably be best described as a
realist, because he concerns himself entirely with
records of the world about him and with studies of
the things he sees. And yet such a definition
would be liable to be misunderstood if it were put
forward without some qualification. Realism, as a
term in art, is very often grievously misapplied.
It has been claimed, for instance, by a class of
painters who go out of their way to seek subjects
from the most decadent and repulsive side of life
and who delight in representing the most debased
aspects of modern humanity. An artist calls him-
self a realist because he presents with a blatant
and exaggerated affectation of reality subjects that
are happily comparatively uncommon, because he
shuts his eyes to the many beauties of the world
and hunts assiduously for the few gross and hideous
things which saner men are anxious to forget. He
idealises ugliness, and the more unpleasant he can
make his idealisations the more loudly he asserts
his claim to be considered a devoted lover of truth

and an uncompromising delineator of the real facts
of existence.

We may be thankful that Mr. Cecil King is not
a realist of this sort. His realism is, indeed, of
a much truer and more rational type, something
much more intimately related to the characteristic
actualities of our times and much more attractive
in its Tightness of outlook and sense of propriety.
For what he really does is to study shrewdly and
sensitively those aspects of the world which most
of us who have kept our instincts reasonably clean
habitually see. He will, no doubt, disappoint the
specialists in abnormalities who look at one small
side of life and are blind to everything else, but he
will please and convince the far larger number
who have the good sense to prefer the agreeable
things and derive enjoyment from the art that deals
with them.

But, again, he does not belong to that school of
realism which insists upon the exact statement in a
painted work of every trivial detail that the
laborious observer can discover in nature. He
holds the conviction that such exactness as this is
opposed to true reality and that its inflexible
pedantry defeats the end of art. What he wants is
to create the impression of reality by seizing upon