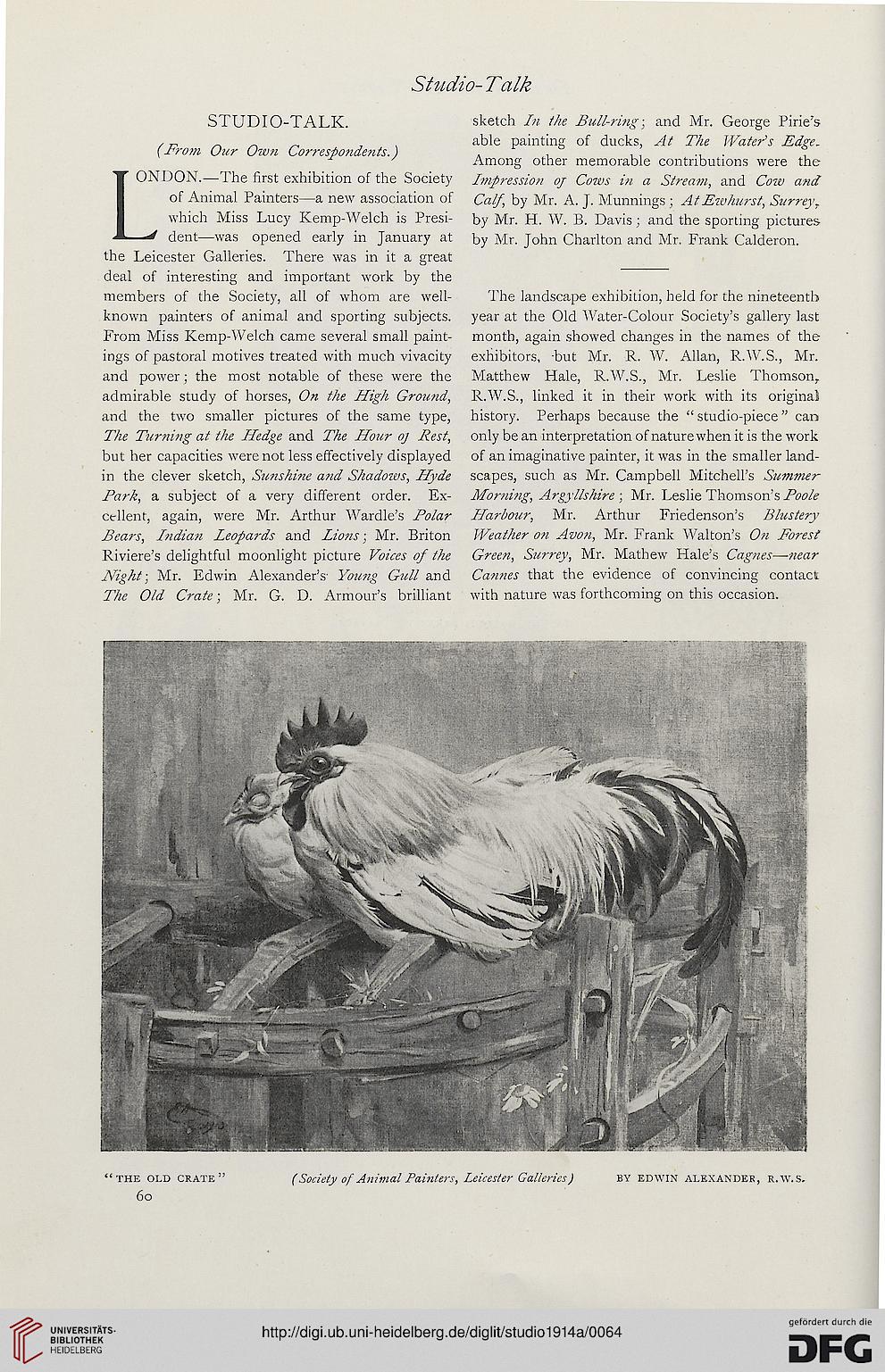 LONDON.—The first exhibition of the Society
of Animal Painters—a new association of
which Miss Lucy Kemp-Welch is Presi-
dent—was opened early in January at
the Leicester Galleries. There was in it a great
deal of interesting and important work by the
members of the Society, all of whom are well-
known painters of animal and sporting subjects.
From Miss Kemp-Welch came several small paint-
ings of pastoral motives treated with much vivacity
and power ; the most notable of these were the
admirable study of horses, On the High Ground,
and the two smaller pictures of the same type,
The Turning at the Hedge and The Hour oj Rest,
but her capacities were not less effectively displayed
in the clever sketch, Sunshine and Shadows, Hyde
Park, a subject of a very different order. Ex-
cellent, again, were Mr. Arthur Wardle's Polar
Bears, Indian Leopards and Lions; Mr. Briton
Riviere's delightful moonlight picture Voices of the
Hight; Mr. Edwin Alexander's Young Gull and
The Old Crate; Mr. G. D. Armour's brilliant

sketch In the Bull-ring; and Mr. George Pirie's
able painting of ducks, At The Water's Edge.
Among other memorable contributions were the
Impression oj Cows in a Stream, and Cow and
Calf, by Mr. A. J. Munnings ; AtEwhurst, Surrey,
by Mr. H. W. B. Davis; and the sporting pictures-
by Mr. John Charlton and Mr. Frank Calderon.

The landscape exhibition, held for the nineteenth
year at the Old Water-Colour Society's gallery last
month, again showed changes in the names of the
exhibitors, but Mr. R. W. Allan, R.W.S., Mr.
Matthew Hale, R.W.S., Mr. Leslie Thomson,
R.W.S., linked it in their work with its original
history. Perhaps because the "studio-piece" can
only be an interpretation of nature when it is the work
of an imaginative painter, it was in the smaller land-
scapes, such as Mr. Campbell Mitchell's Summer
Morning, Argyllshire ; Mr. Leslie Thomson's Poole
Harbour, Mr. Arthur Friedenson's Blustery
Weather on Avon, Mr. Frank Walton's On Forest
Green, Surrey, Mr. Mathew Hale's Cagnes—near
Cannes that the evidence of convincing contact
with nature was forthcoming on this occasion.