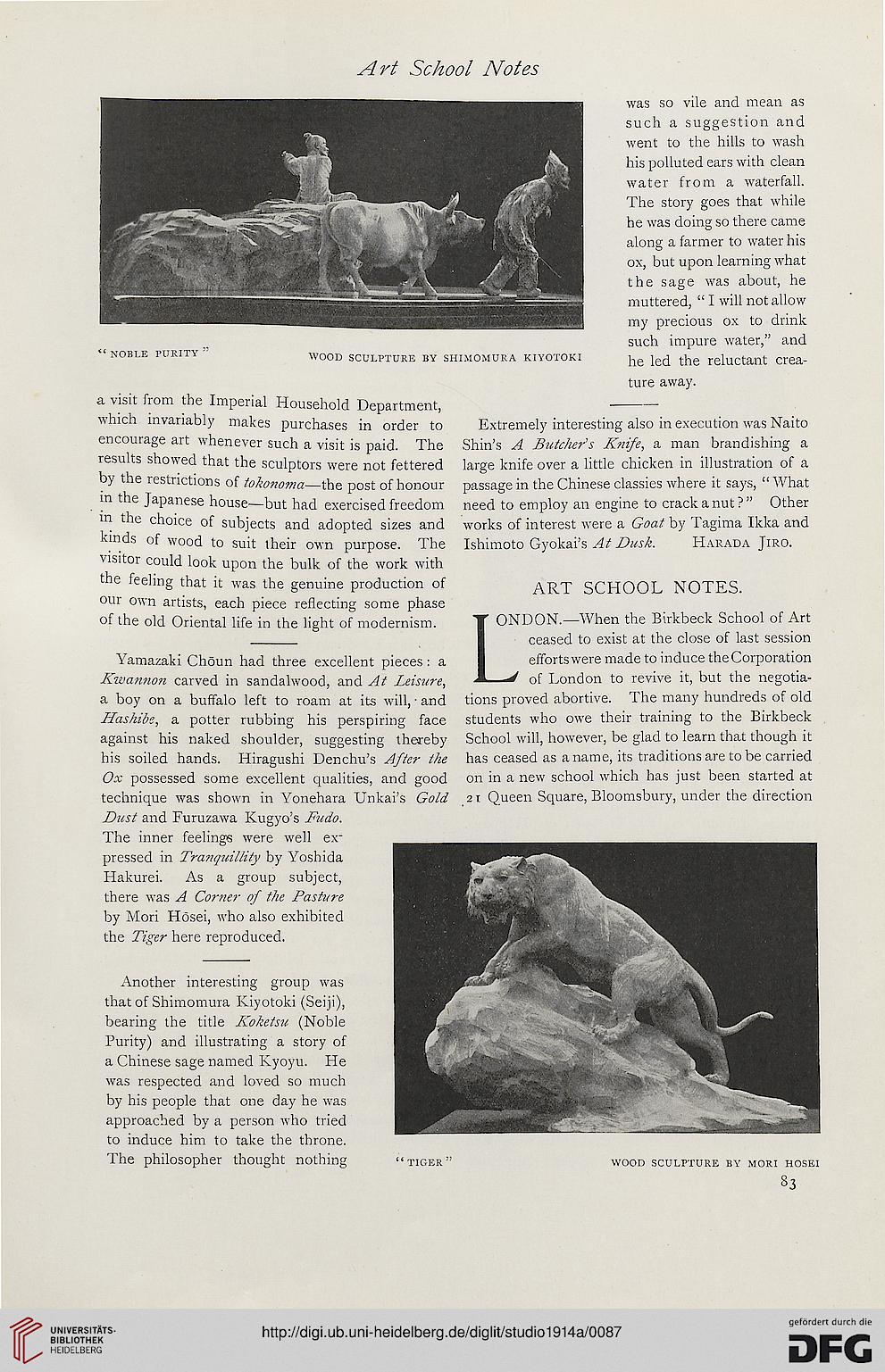 was so vile and mean as
such a suggestion and
went to the hills to wash
his polluted ears with clean
water from a waterfall.
The story goes that while
he was doing so there came
along a farmer to water his
ox, but upon learning what
the sage was about, he
muttered, " I will not allow
my precious ox to drink
such impure water," and

a visit from the Imperial Household Department, --

which invariably makes purchases in order to Extremely interesting also in execution was Naito
encourage art whenever such a visit is paid. The Shin's A Butcher's Knife, a man brandishing a
results showed that the sculptors were not fettered large knife over a little chicken in illustration of a
by the restrictions of tokonoma—the post of honour passage in the Chinese classies where it says, " What
in the Japanese house—but had exercised freedom need to employ an engine to crack a nut ? " Other
m the choice of subjects and adopted sizes and works of interest were a Goat by Tagima Ikka and
kinds of wood to suit their own purpose. The Ishimoto Gyokai's At Dusk. Harada Jiro.
visitor could look upon the bulk of the work with

the feeling that it was the genuine production of ART SCHOOL NOTES,

our own artists, each piece reflecting some phase

of the old Oriental life in the light of modernism. T ONDON.—When the Birkbeck School of Art

_ I ceased to exist at the close of last session

Yamazaki Choun had three excellent pieces: a efforts were made to induce the Corporation

Kwannon carved in sandalwood, and At Leisure, *—^ of London to revive it, but the negotia-
a boy on a buffalo left to roam at its will, ■ and tions proved abortive. The many hundreds of old
Hashibe, a potter rubbing his perspiring face students who owe their training to the Birkbeck
against his naked shoulder, suggesting thereby School will, however, be glad to learn that though it
his soiled hands. Hiragushi Denchu's After the has ceased as a name, its traditions are to be carried
Ox possessed some excellent qualities, and good on in a new school which has just been started at
technique was shown in Yonehara Unkai's Gold 21 Queen Square, Bloomsbury, under the direction
Dust and Furuzawa Kugyo's Fudo.
The inner feelings were well ex-
pressed in Tranquillity by Yoshida
Hakurei. As a group subject,
there was A Corner of the Pasture
by Mori Hosei, who also exhibited
the Tiger here reproduced.

Another interesting group was
that of Shimomura Kiyotoki (Seiji),
bearing the title Koketsu (Noble
Purity) and illustrating a story of
a Chinese sage named Kyoyu. He
was respected and loved so much
by his people that one day he was
approached by a person who tried
to induce him to take the throne.
The philosopher thought nothing "tiger" wood sculpture by mori hosei