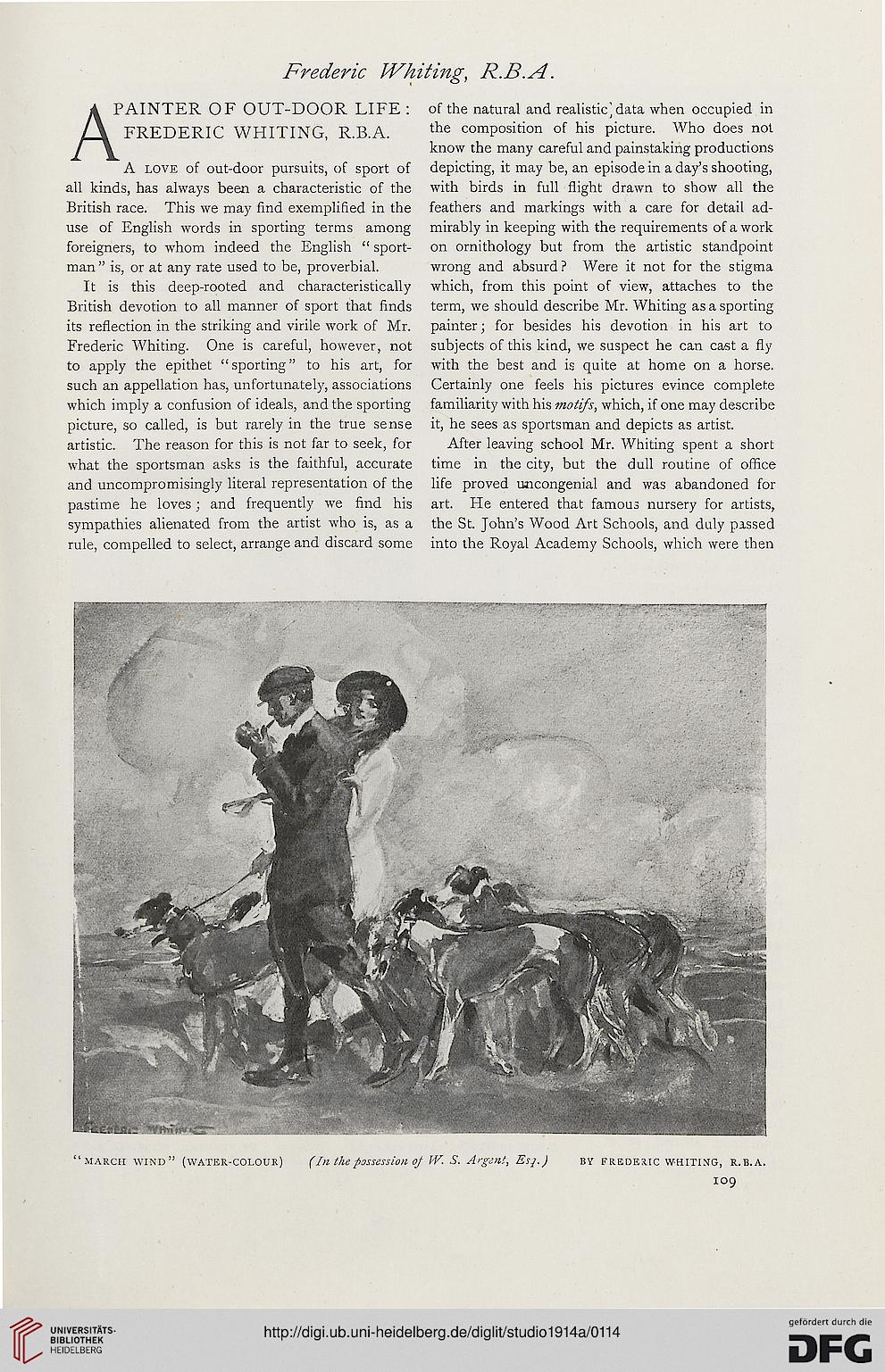 APAINTER OF OUT-DOOR LIFE : of the natural and realistic ] data when occupied in
FREDERIC WHITING RBA tne composition of his picture. Who does not
know the many careful and painstaking productions
A love of out-door pursuits, of sport of depicting, it may be, an episode in a day's shooting,
all kinds, has always been a characteristic of the with birds in full flight drawn to show all the
British race. This we may find exemplified in the feathers and markings with a care for detail ad-
use of English words in sporting terms among mirably in keeping with the requirements of a work
foreigners, to whom indeed the English " sport- on ornithology but from the artistic standpoint
man " is, or at any rate used to be, proverbial. wrong and absurd ? Were it not for the stigma
It is this deep-rooted and characteristically which, from this point of view, attaches to the
British devotion to all manner of sport that finds term, we should describe Mr. Whiting as a sporting
its reflection in the striking and virile work of Mr. painter; for besides his devotion in his art to
Frederic Whiting. One is careful, however, not subjects of this kind, we suspect he can cast a fly
to apply the epithet "sporting" to his art, for with the best and is quite at home on a horse,
such an appellation has, unfortunately, associations Certainly one feels his pictures evince complete
which imply a confusion of ideals, and the sporting familiarity with his motifs, which, if one may describe
picture, so called, is but rarely in the true sense it, he sees as sportsman and depicts as artist,
artistic. The reason for this is not far to seek, for After leaving school Mr. Whiting spent a short
what the sportsman asks is the faithful, accurate time in the city, but the dull routine of office
and uncompromisingly literal representation of the life proved uncongenial and was abandoned for
pastime he loves ; and frequently we find his art. He entered that famous nursery for artists,
sympathies alienated from the artist who is, as a the St. John's Wood Art Schools, and duly passed
rule, compelled to select, arrange and discard some into the Royal Academy Schools, which were then