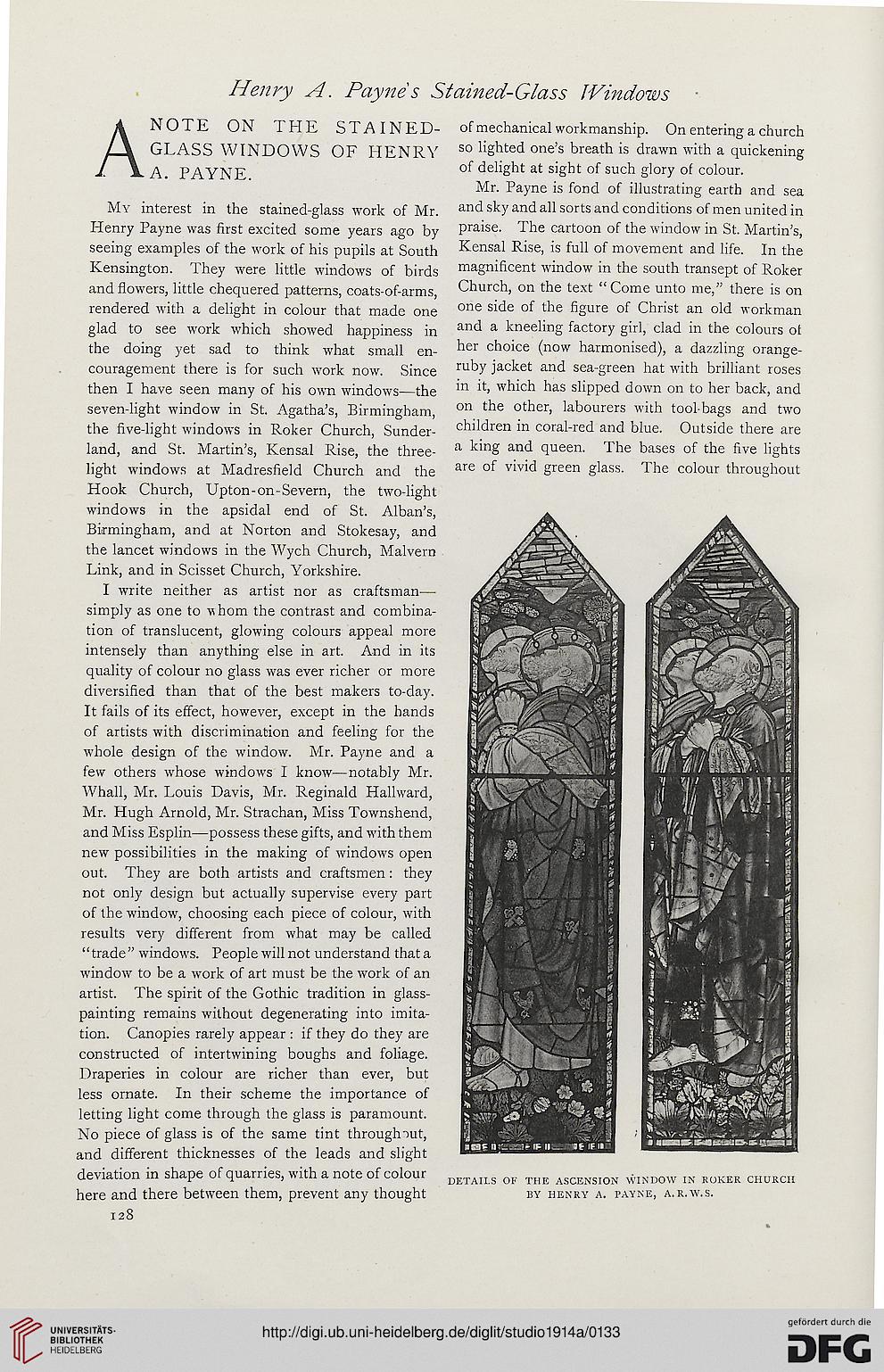 ANOTE ON THE STAINED- of mechanical workmanship. On entering a church
GLASS WINDOWS OF HENRY so nSnted one's breath is drawn with a quickening
A PAYNE °^ dehSnt at sight of such glory of colour.

Mr. Payne is fond of illustrating earth and sea
My interest in the stained-glass work of Mr. and sky and all sorts and conditions of men united in
Henry Payne was first excited some years ago by praise. The cartoon of the window in St. Martin's,
seeing examples of the work of his pupils at South Kensal Rise, is full of movement and life. In the
Kensington. They were little windows of birds magnificent window in the south transept of Roker
and flowers, little chequered patterns, coats-of-arms, Church, on the text "Come unto me," there is on
rendered with a delight in colour that made one one side of the nSure of christ an old workman
glad to see work which showed happiness in and a kneeling factory girl, clad in the colours ot
the doing yet sad to think what small en- her choice (now harmonised), a dazzling orange-
couragement there is for such work now. Since raby Jacket and sea"green hat with brilliant roses
then I have seen many of his own windows—the in [t> which has slipped down on to her back, and
seven-light window in St. Agatha's, Birmingham, on the other> labourers with tool-bags and two
the five-light windows in Roker Church, Sunder- children ;n coral-red and blue. Outside there are
land, and St. Martin's, Kensal Rise, the three- a kin§ and <Iueen- The bases of the five ]>ghts
light windows at Madresfield Church and the are of vivid Sreen Slass- The colour throughout
Hook Church, Upton-on-Severn, the two-light
windows in the apsidal end of St. Alban's,
Birmingham, and at Norton and Stokesay, and
the lancet windows in the Wych Church, Malvern
Link, and in Scisset Church, Yorkshire.

I write neither as artist nor as craftsman—
simply as one to whom the contrast and combina-
tion of translucent, glowing colours appeal more
intensely than anything else in art. And in its
quality of colour no glass was ever richer or more
diversified than that of the best makers to-day.
It fails of its effect, however, except in the hands
of artists with discrimination and feeling for the
whole design of the window. Mr. Payne and a
few others whose windows I know—notably Mr.
Whall, Mr. Louis Davis, Mr. Reginald Halhvard,
Mr. Hugh Arnold, Mr. Strachan, Miss Townshend,
and Miss Esplin—possess these gifts, and with them
new possibilities in the making of windows open
out. They are both artists and craftsmen: they
not only design but actually supervise every part
of the window, choosing each piece of colour, with
results very different from what may be called
"trade" windows. People will not understand that a
window to be a work of art must be the work of an
artist. The spirit of the Gothic tradition in glass-
painting remains without degenerating into imita-
tion. Canopies rarely appear : if they do they are
constructed of intertwining boughs and foliage.
Draperies in colour are richer than ever, but
less ornate. In their scheme the importance of
letting light come through the glass is paramount.
No piece of glass is of the same tint throughout,
and different thicknesses of the leads and slight
deviation in shape of quarries, with a note of colour details of the ascension window in roker church
here and there between them, prevent any thought by henry a. payne, a.r.w.s.