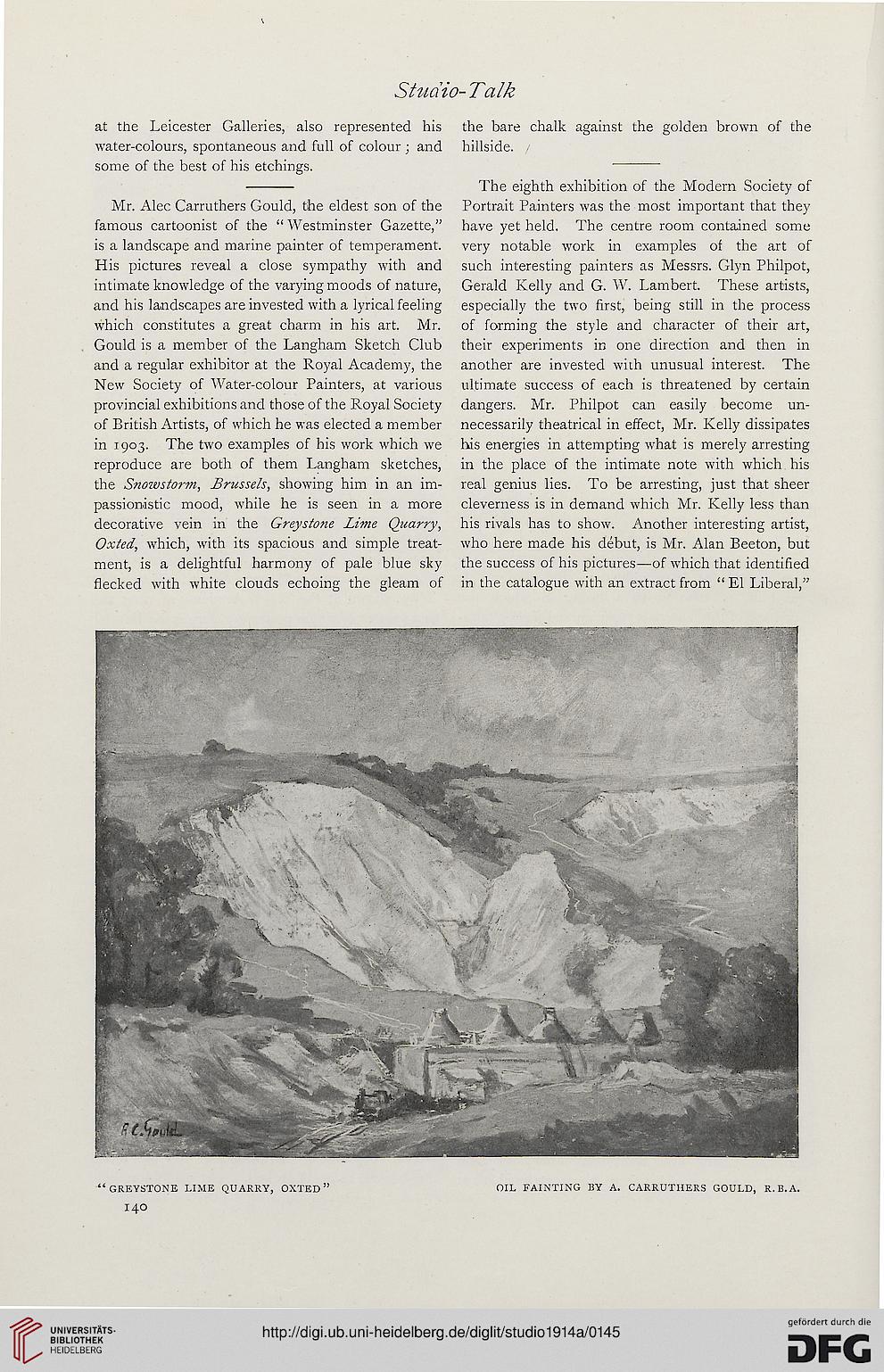 at the Leicester Galleries, also represented his
water-colours, spontaneous and full of colour ; and
some of the best of his etchings.

Mr. Alec Carruthers Gould, the eldest son of the
famous cartoonist of the " Westminster Gazette,"
is a landscape and marine painter of temperament.
His pictures reveal a close sympathy with and
intimate knowledge of the varying moods of nature,
and his landscapes are invested with a lyrical feeling
which constitutes a great charm in his art. Mr.
Gould is a member of the Langham Sketch Club
and a regular exhibitor at the Royal Academy, the
New Society of Water-colour Painters, at various
provincial exhibitions and those of the Royal Society
of British Artists, of which he was elected a member
in 1903. The two examples of his work which we
reproduce are both of them Langham sketches,
the Snowstorm, Brussels, showing him in an im-
passionistic mood, while he is seen in a more
decorative vein in the Greystone Lime Quarry,
Oxted, which, with its spacious and simple treat-
ment, is a delightful harmony of pale blue sky
flecked with white clouds echoing the gleam of

the bare chalk against the golden brown of the
hillside. ,

The eighth exhibition of the Modern Society of
Portrait Painters was the most important that they
have yet held. The centre room contained some
very notable work in examples of the art of
such interesting painters as Messrs. Glyn Philpot,
Gerald Kelly and G. W. Lambert. These artists,
especially the two first, being still in the process
of forming the style and character of their art,
their experiments in one direction and then in
another are invested with unusual interest. The
ultimate success of each is threatened by certain
dangers. Mr. Philpot can easily become un-
necessarily theatrical in effect, Mr. Kelly dissipates
his energies in attempting what is merely arresting
in the place of the intimate note with which his
real genius lies. To be arresting, just that sheer
cleverness is in demand which Mr. Kelly less than
his rivals has to show. Another interesting artist,
who here made his debut, is Mr. Alan Beeton, but
the success of his pictures—of which that identified
in the catalogue with an extract from " El Liberal,"