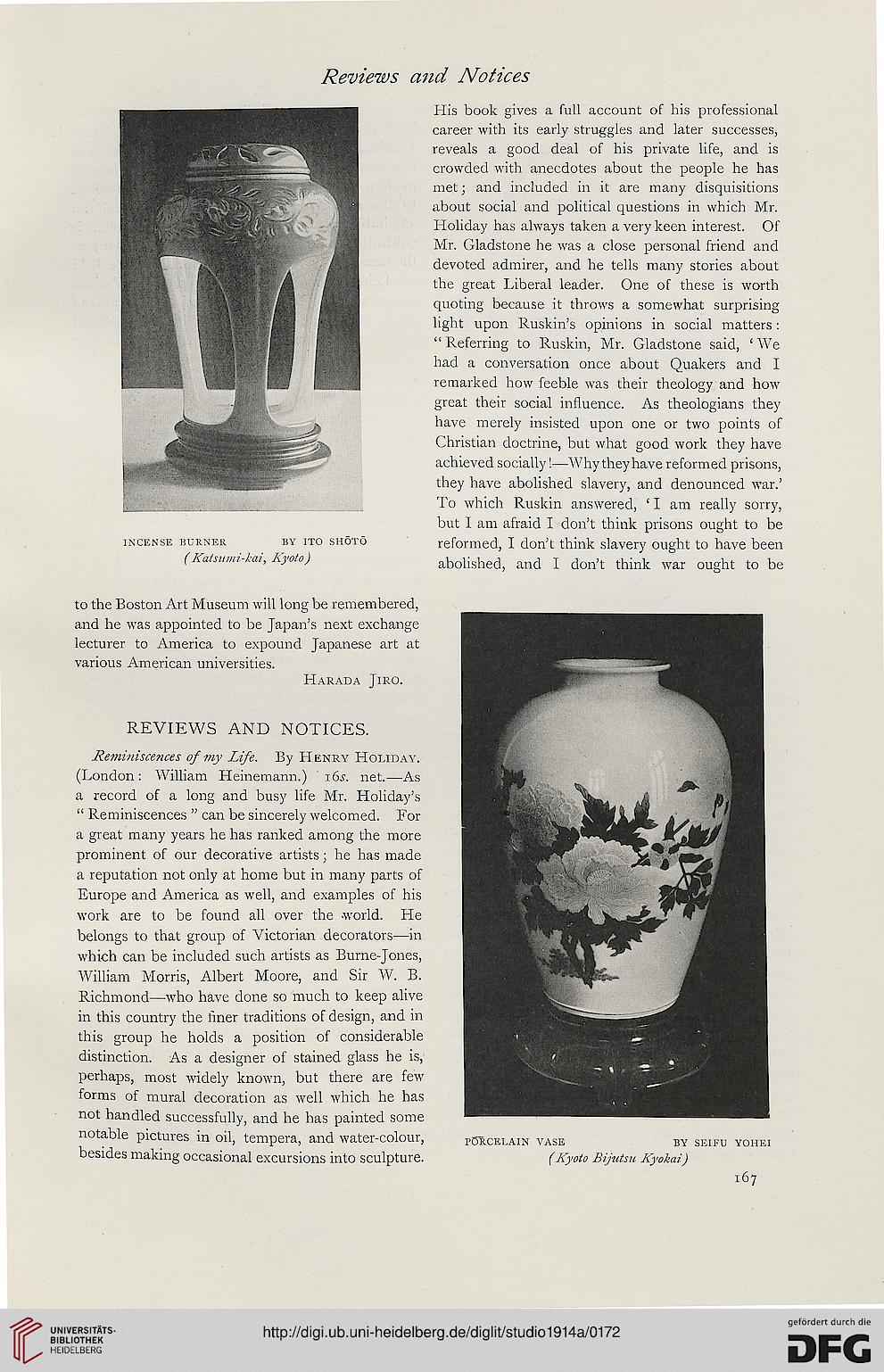 to the Boston Art Museum will long be remembered,
and he was appointed to be Japan's next exchange
lecturer to America to expound Japanese art at
various American universities.

Reminiscences of my Life. By Henry Holiday.
(London: William Heinemann.) i6.r. net.—As
a record of a long and busy life Mr. Holiday's
" Reminiscences " can be sincerely welcomed. For
a great many years he has ranked among the more
prominent of our decorative artists; he has made
a reputation not only at home but in many parts of
Europe and America as well, and examples of his
work are to be found all over the world. He
belongs to that group of Victorian decorators—in
which can be included such artists as Burne-Jones,
William Morris, Albert Moore, and Sir W. B.
Richmond—who have done so much to keep alive
in this country the finer traditions of design, and in
this group he holds a position of considerable
distinction. As a designer of stained glass he is,
perhaps, most widely known, but there are few
forms of mural decoration as well which he has
not handled successfully, and he has painted some
notable pictures in oil, tempera, and water-colour,
besides making occasional excursions into sculpture.

His book gives a full account of his professional
career with its early struggles and later successes,
reveals a good deal of his private life, and is
crowded with anecdotes about the people he has
met; and included in it are many disquisitions
about social and political questions in which Mr.
Holiday has always taken a very keen interest. Of
Mr. Gladstone he was a close personal friend and
devoted admirer, and he tells many stories about
the great Liberal leader. One of these is worth
quoting because it throws a somewhat surprising
light upon Ruskin's opinions in social matters:
" Referring to Ruskin, Mr. Gladstone said, ' We
had a conversation once about Quakers and I
remarked how feeble was their theology and how
great their social influence. As theologians they
have merely insisted upon one or two points of
Christian doctrine, but what good work they have
achieved socially!—Why they have reformed prisons,
they have abolished slavery, and denounced war.'
To which Ruskin answered, ' I am really sorry,
but I am afraid I don't think prisons ought to be
reformed, I don't think slavery ought to have been
abolished, and I don't think war ought to be