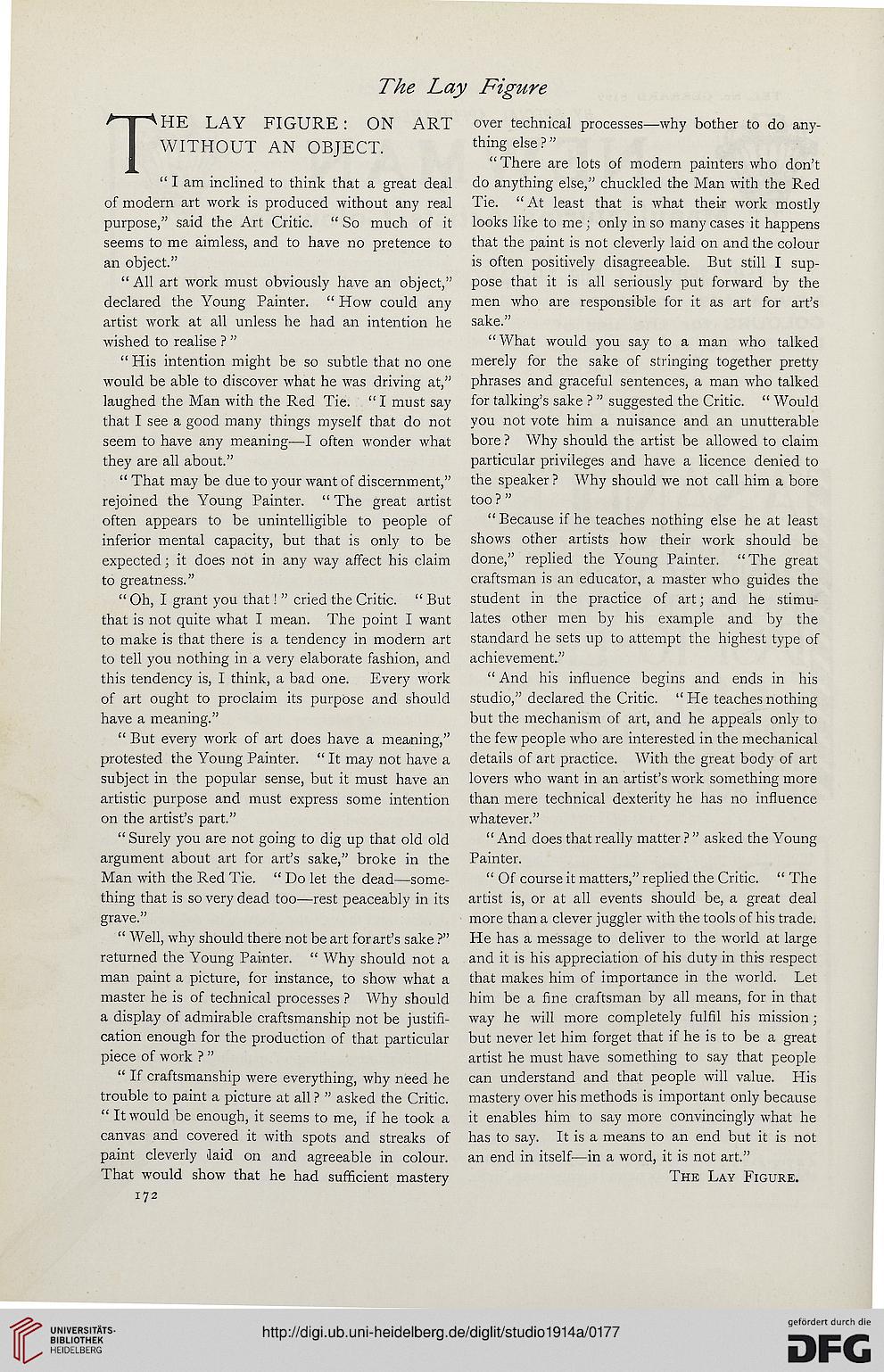 THE LAY FIGURE: ON ART
WITHOUT AN OBJECT.

" I am inclined to think that a great deal
of modern art work is produced without any real
purpose," said the Art Critic. " So much of it
seems to me aimless, and to have no pretence to
an object."

" All art work must obviously have an object,"
declared the Young Painter. " How could any
artist work at all unless he had an intention he
wished to realise ? "

" His intention might be so subtle that no one
would be able to discover what he was driving at,"
laughed the Man with the Red Tie. " I must say
that I see a good many things myself that do not
seem to have any meaning—I often wonder what
they are all about."

" That may be due to your want of discernment,"
rejoined the Young Painter. " The great artist
often appears to be unintelligible to people of
inferior mental capacity, but that is only to be
expected; it does not in any way affect his claim
to greatness."

" Oh, I grant you that! " cried the Critic. " But
that is not quite what I mean. The point I want
to make is that there is a tendency in modern art
to tell you nothing in a very elaborate fashion, and
this tendency is, I think, a bad one. Every work
of art ought to proclaim its purpose and should
have a meaning."

" But every work of art does have a meaning,"
protested the Young Painter. " It may not have a
subject in the popular sense, but it must have an
artistic purpose and must express some intention
on the artist's part."

" Surely you are not going to dig up that old old
argument about art for art's sake," broke in the
Man with the Red Tie. " Do let the dead—some-
thing that is so very dead too—rest peaceably in its
grave."

" Well, why should there not be art for art's sake ?"
returned the Young Painter. " Why should not a
man paint a picture, for instance, to show what a
master he is of technical processes ? Why should
a display of admirable craftsmanship not be justifi-
cation enough for the production of that particular
piece of work ? "

" If craftsmanship were everything, why need he
trouble to paint a picture at all ? " asked the Critic.
" It would be enough, it seems to me, if he took a
canvas and covered it with spots and streaks of
paint cleverly .laid on and agreeable in colour.
That would show that he had sufficient mastery
172

over technical processes—why bother to do any-
thing else ? "

" There are lots of modern painters who don't
do anything else," chuckled the Man with the Red
Tie. " At least that is what their work mostly
looks like to me ; only in so many cases it happens
that the paint is not cleverly laid on and the colour
is often positively disagreeable. But still I sup-
pose that it is all seriously put forward by the
men who are responsible for it as art for art's
sake."

"What would you say to a man who talked
merely for the sake of stringing together pretty
phrases and graceful sentences, a man who talked
for talking's sake ? " suggested the Critic. " Would
you not vote him a nuisance and an unutterable
bore ? Why should the artist be allowed to claim
particular privileges and have a licence denied to
the speaker ? Why should we not call him a bore
too ? "

" Because if he teaches nothing else he at least
shows other artists how their work should be
done," replied the Young Painter. "The great
craftsman is an educator, a master who guides the
student in the practice of art; and he stimu-
lates other men by his example and by the
standard he sets up to attempt the highest type of
achievement."

" And his influence begins and ends in his
studio," declared the Critic. " He teaches nothing
but the mechanism of art, and he appeals only to
the few people who are interested in the mechanical
details of art practice. With the great body of art
lovers who want in an artist's work something more
than mere technical dexterity he has no influence
whatever."

" And does that really matter ? " asked the Young
Painter.

" Of course it matters," replied the Critic. " The
artist is, or at all events should be, a great deal
more than a clever juggler with the tools of his trade.
He has a message to deliver to the world at large
and it is his appreciation of his duty in this respect
that makes him of importance in the world. Let
him be a fine craftsman by all means, for in that
way he will more completely fulfil his mission;
but never let him forget that if he is to be a great
artist he must have something to say that people
can understand and that people will value. His
mastery over his methods is important only because
it enables him to say more convincingly what he
has to say. It is a means to an end but it is not
an end in itself—in a word, it is not art."