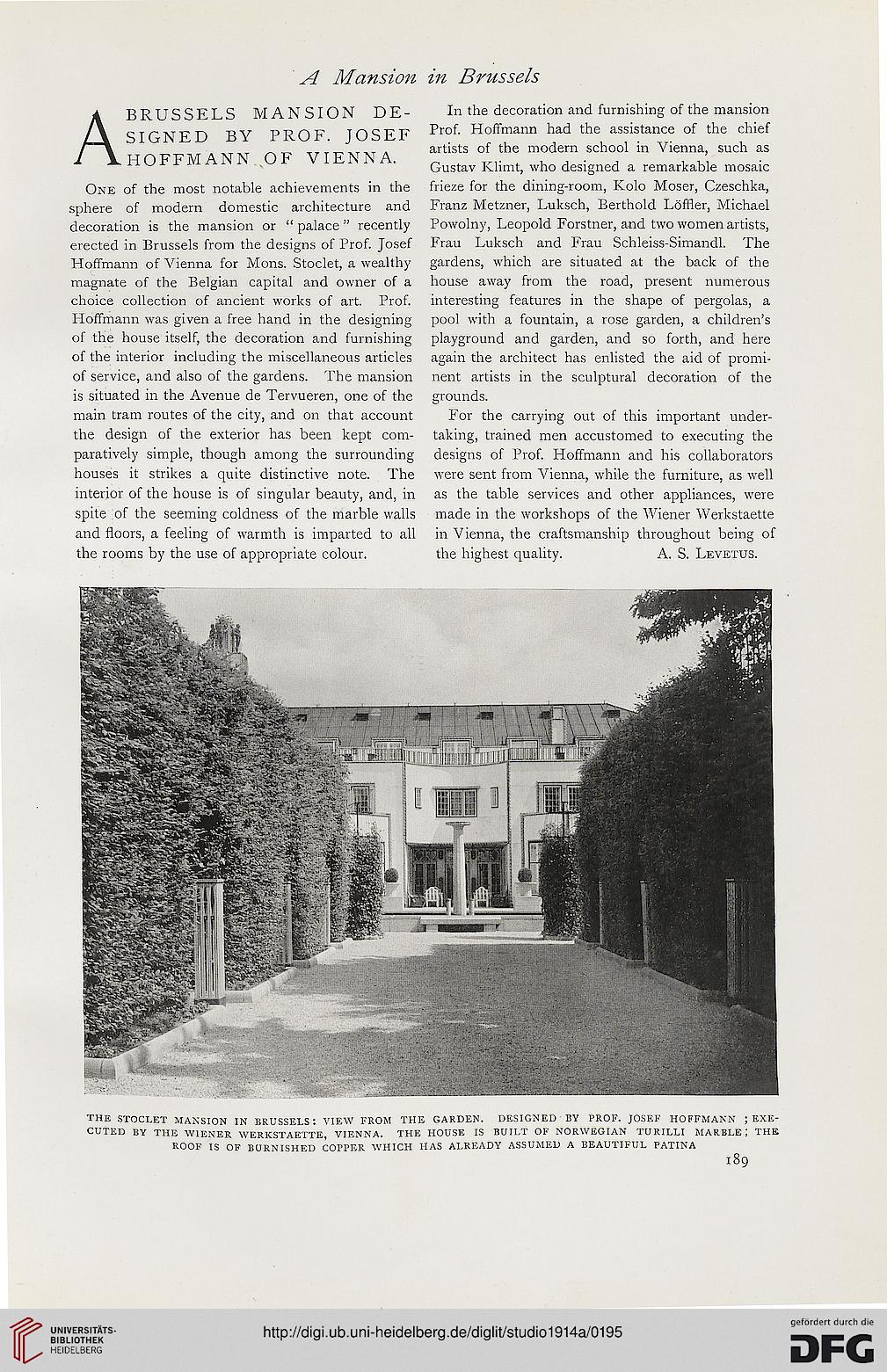 Information about OCR text
A Mansion in Brussels

ABRUSSELS MANSION DE- In the decoration and furnishing of the mansion

„„ „TT,^T„T. artists of the modern school in Vienna, such as

One of the most notable achievements in the frieze for the dining-room, Kolo Moser, Czeschka,

erected in Brussels from the designs of Prof. Josef Frau Luksch and Frau Schleiss-Simandl. The

Hoffmann of Vienna for Mons. Stoclet, a wealthy gardens, which are situated at the back of the

magnate of the Belgian capital and owner of a house away from the road, present numerous

choice collection of ancient works of art. Prof. interesting features in the shape of pergolas, a

Hoffmann was given a free hand in the designing pool with a fountain, a rose garden, a children's

of the house itself, the decoration and furnishing playground and garden, and so forth, and here

of service, and also of the gardens. The mansion nent artists in the sculptural decoration of the

is situated in the Avenue de Tervueren, one of the grounds.

main tram routes of the city, and on that account For the carrying out of this important under-

the design of the exterior has been kept com- taking, trained men accustomed to executing the

paratively simple, though among the surrounding designs of Prof. Hoffmann and his collaborators

houses it strikes a quite distinctive note. The were sent from Vienna, while the furniture, as well

interior of the house is of singular beauty, and, in as the table services and other appliances, were

and floors, a feeling of warmth is imparted to all in Vienna, the craftsmanship throughout being of

the rooms by the use of appropriate colour. the highest quality. A. S. Levetus.

THE STOCLET MANSION IN BRUSSELS: VIEW FROM THE GARDEN. DESIGNED BY PROF. JOSEF HOFFMANN ; EXE-
CUTED BY THE WIENER WERKSTAETTE, VIENNA. THE HOUSE IS BUILT OF NORWEGIAN TURILLI MARBLE ', THE
ROOF IS OF BURNISHED COPPER WHICH HAS ALREADY ASSUMED A BEAUTIFUL PATINA