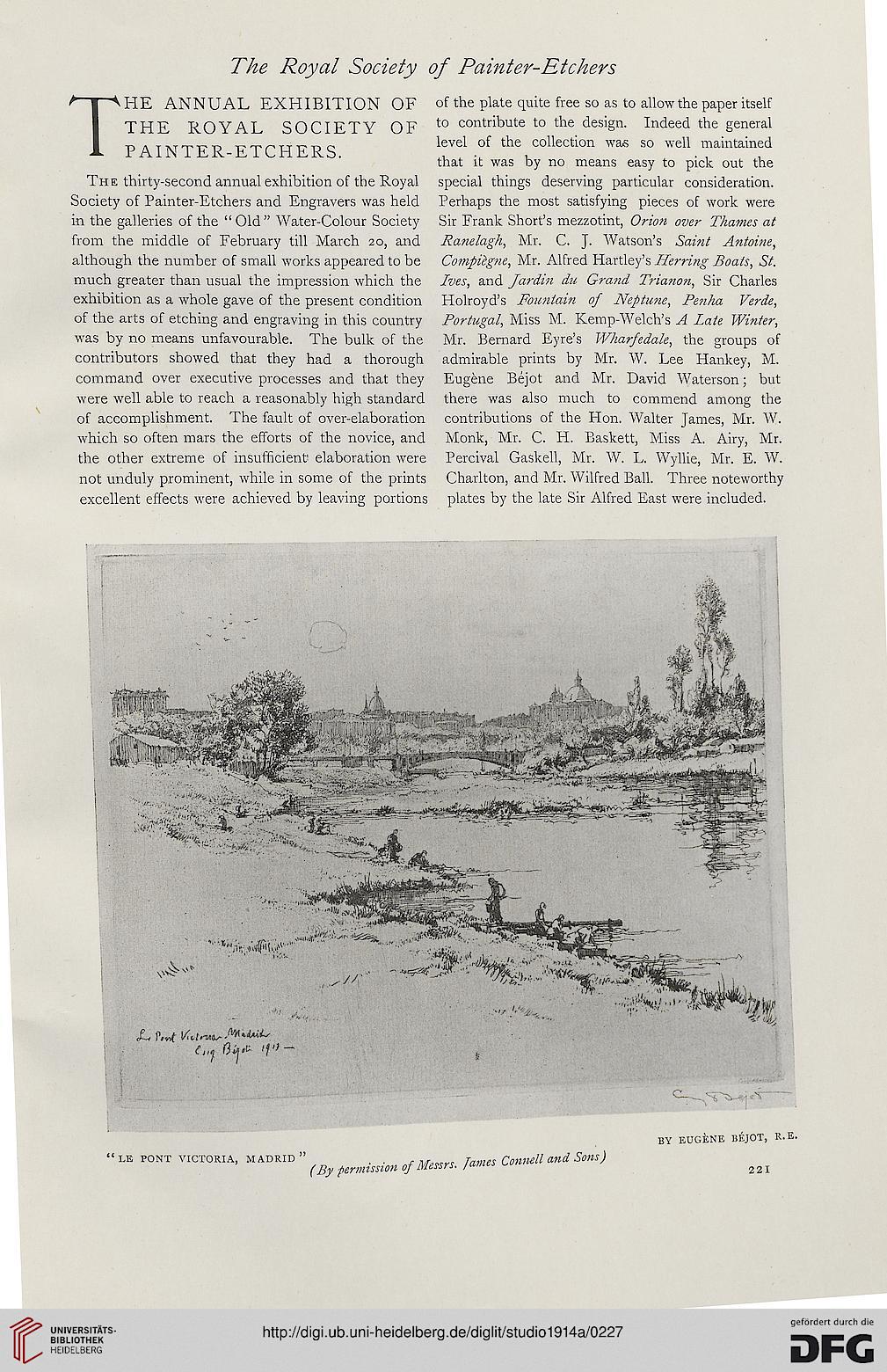 Information about OCR text
The Royal Society of Painter-Etchers

HE ANNUAL EXHIBITION OF
THE ROYAL SOCIETY OF
PAINTER-ETCHERS.

The thirty-second annual exhibition of the Royal
Society of Painter-Etchers and Engravers was held
in the galleries of the "Old" Water-Colour Society
from the middle of February till March 20, and
although the number of small works appeared to be
much greater than usual the impression which the
exhibition as a whole gave of the present condition
of the arts of etching and engraving in this country
was by no means unfavourable. The bulk of the
contributors showed that they had a thorough
command over executive processes and that they
were well able to reach a reasonably high standard
of accomplishment. The fault of over-elaboration
which so often mars the efforts of the novice, and
the other extreme of insufficient* elaboration were
not unduly prominent, while in some of the prints
excellent effects were achieved by leaving portions

of the plate quite free so as to allow the paper itself
to contribute to the design. Indeed the general
level of the collection was so well maintained
that it was by no means easy to pick out the
special things deserving particular consideration.
Perhaps the most satisfying pieces of work were
Sir Frank Short's mezzotint, Orion over Thames at
Ranelagh, Mr. C. J. Watson's Saint Antoine,
Compiegne, Mr. Alfred Hartley's Herring Boats, St.
Ives, and Jardin du Grand Trianon, Sir Charles
Holroyd's Fountain of Neptune, Penha Verde,
Portugal, Miss M. Kemp-Welch's A Late Winter,
Mr. Bernard Eyre's Wharfedale, the groups of
admirable prints by Mr. W. Lee Hankey, M.
Eugene Bejot and Mr. David Waterson; but
there was also much to commend among the
contributions of the Hon. Walter James, Mr. W.
Monk, Mr. C. H. Baskett, Miss A. Airy, Mr.
Percival Gaskell, Mr. W. L. Wyllie, Mr. E. W.
Charlton, and Mr. Wilfred Ball. Three noteworthy
plates by the late Sir Alfred East were included.