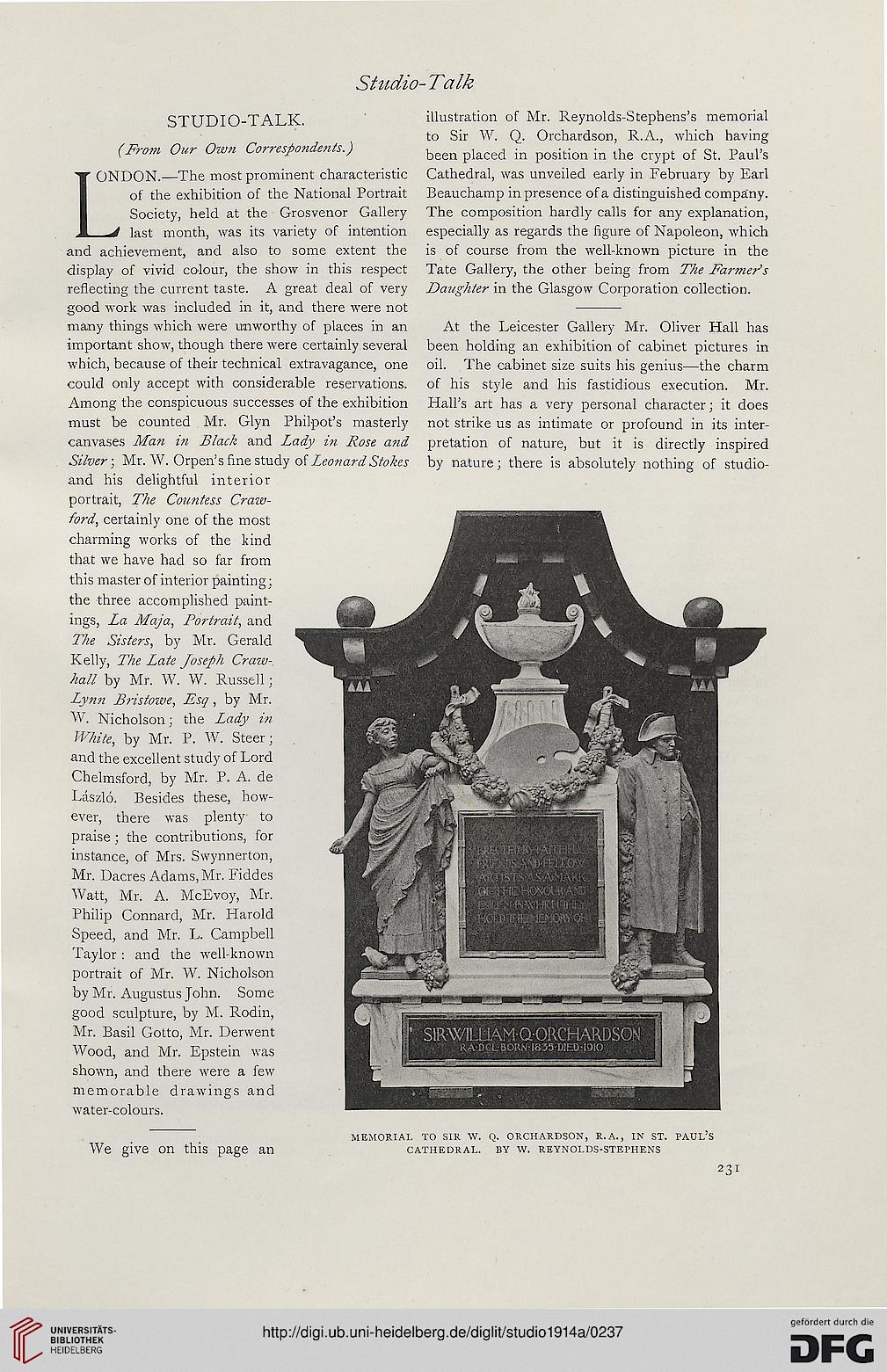 E-DON.—The most prominent characteristic Cathedral, was unveiled early in February by Earl

of the exhibition of the National Portrait Beauchamp in presence of a distinguished company.

Society, held at the Grosvenor Gallery The composition hardly calls for any explanation,

last month, was its variety of intention especially as regards the figure of Napoleon, which

and achievement, and also to some extent the is of course from the well-known picture in the

display of vivid colour, the show in this respect Tate Gallery, the other being from The Farmer's

reflecting the current taste. A great deal of very Daughter in the Glasgow Corporation collection.

good work was included in it, and there were not -

many things which were unworthy of places in an At the Leicester Gallery Mr. Oliver Hall has
important show, though there were certainly several been holding an exhibition of cabinet pictures in
which, because of their technical extravagance, one oil. The cabinet size suits his genius—the charm
could only accept with considerable reservations, of his style and his fastidious execution. Mr.
Among the conspicuous successes of the exhibition Hall's art has a very personal character; it does
must be counted Mr. Glyn Philpot's masterly not strike us as intimate or profound in its inter-
canvases Man in Black and Lady in Rose and pretation of nature, but it is directly inspired
Silver; Mr. W. Orpen's fine study of Leonard Stokes by nature; there is absolutely nothing of studio-
and his delightful interior
portrait, The Countess Craw-
ford, certainly one of the most |J Wk
charming works of the kind

that we have had so far from /jf,

this master of interior painting; IM \

the three accomplished paint-
ings, La Maja, Portrait, and
The Sisters, by Mr. Gerald
Kelly, The Late Joseph Craw- ^
hall by Mr. W. W. Russell;
Lynn Bristowe, Esq, by Mr.
W. Nicholson; the Lady in
White, by Mr. P. W. Steer; .
and the excellent study of Lord
Chelmsford, by Mr. P. A. de
Laszlo. Besides these, how-
ever, there was plenty to
praise ; the contributions, for
instance, of Mrs. Swynnerton,
Mr. Dacres Adams, Mr. Fiddes
Watt, Mr. A. McEvoy, Mr.
Philip Connard, Mr. Harold
Speed, and Mr. L. Campbell
Taylor: and the well-known
portrait of Mr. W. Nicholson
by Mr. Augustus John. Some
good sculpture, by M. Rodin,
Mr. Basil Gotto, Mr. Derwent
Wood, and Mr. Epstein was
shown, and there were a few
memorable drawings and
water-colours.

We give on this page an