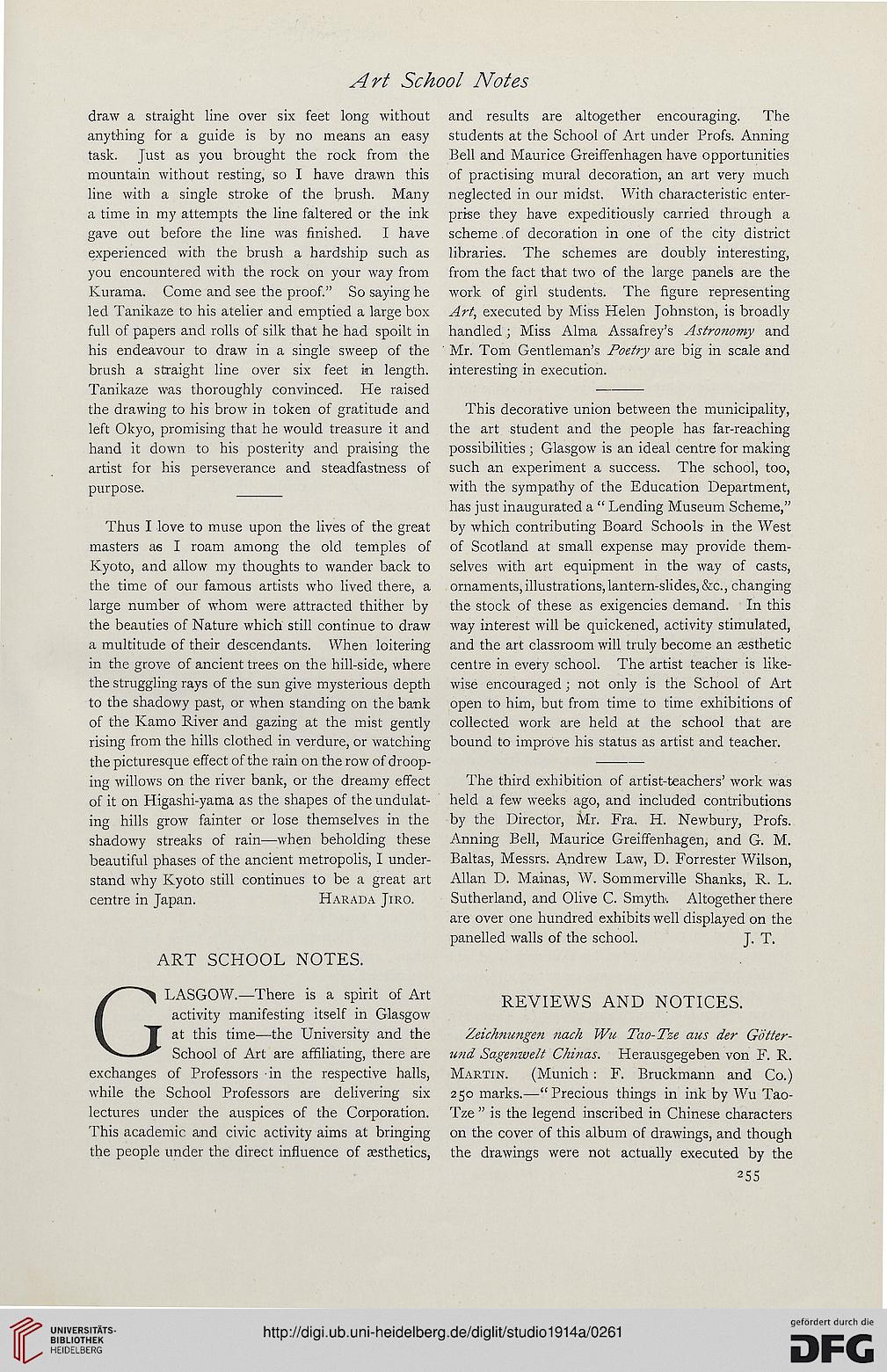 draw a straight line over six feet long without
anything for a guide is by no means an easy
task. Just as you brought the rock from the
mountain without resting, so I have drawn this
line with a single stroke of the brush. Many
a time in my attempts the line faltered or the ink
gave out before the line was finished. I have
experienced with the brush a hardship such as
you encountered with the rock on your way from
Kurama. Come and see the proof." So saying he
led Tanikaze to his atelier and emptied a large box
full of papers and rolls of silk that he had spoilt in
his endeavour to draw in a single sweep of the
brush a straight line over six feet in length.
Tanikaze was thoroughly convinced. He raised
the drawing to his brow in token of gratitude and
left Okyo, promising that he would treasure it and
hand it down to his posterity and praising the
artist for his perseverance and steadfastness of
purpose. _

Thus I love to muse upon the lives of the great
masters as I roam among the old temples of
Kyoto, and allow my thoughts to wander back to
the time of our famous artists who lived there, a
large number of whom were attracted thither by
the beauties of Nature which still continue to draw
a multitude of their descendants. When loitering
in the grove of ancient trees on the hill-side, where
the struggling rays of the sun give mysterious depth
to the shadowy past, or when standing on the bank
of the Kamo River and gazing at the mist gently
rising from the hills clothed in verdure, or watching
the picturesque effect of the rain on the row of droop-
ing willows on the river bank, or the dreamy effect
of it on Higashi-yama as the shapes of the undulat-
ing hills grow fainter or lose themselves in the
shadowy streaks of rain—when beholding these
beautiful phases of the ancient metropolis, I under-
stand why Kyoto still continues to be a great art
centre in Japan. Harada Jiro.

GLASGOW.—There is a spirit of Art
activity manifesting itself in Glasgow
at this time—the University and the
School of Art are affiliating, there are
exchanges of Professors in the respective halls,
while the School Professors are delivering six
lectures under the auspices of the Corporation.
This academic and civic activity aims at bringing
the people under the direct influence of aesthetics,

and results are altogether encouraging. The
students at the School of Art under Profs. Anning
Bell and Maurice Greiffenhagen have opportunities
of practising mural decoration, an art very much
neglected in our midst. With characteristic enter-
prise they have expeditiously carried through a
scheme , of decoration in one of the city district
libraries. The schemes are doubly interesting,
from the fact that two of the large panels are the
work of girl students. The figure representing
Art, executed by Miss Helen Johnston, is broadly
handled; Miss Alma Assafrey's Astronomy and
Mr. Tom Gentleman's Poetry are big in scale and
interesting in execution.

This decorative union between the municipality,
the art student and the people has far-reaching
possibilities ; Glasgow is an ideal centre for making
such an experiment a success. The school, too,
with the sympathy of the Education Department,
has just inaugurated a " Lending Museum Scheme,"
by which contributing Board Schools in the West
of Scotland at small expense may provide them-
selves with art equipment in the way of casts,
ornaments, illustrations, lantern-slides, &c., changing
the stock of these as exigencies demand. In this
way interest will be quickened, activity stimulated,
and the art classroom will truly become an aesthetic
centre in every school. The artist teacher is like-
wise encouraged ; not only is the School of Art
open to him, but from time to time exhibitions of
collected work are held at the school that are
bound to improve his status as artist and teacher.

Zeichnungen nach Wu Tao-Tze aus der Go iter-
und Sagenzvelt Chinas. Herausgegeben von F. R.
Martin. (Munich : F. Bruckmann and Co.)
250 marks.—"Precious things in ink by Wu Tao-
Tze " is the legend inscribed in Chinese characters
on the cover of this album of drawings, and though
the drawings were not actually executed by the