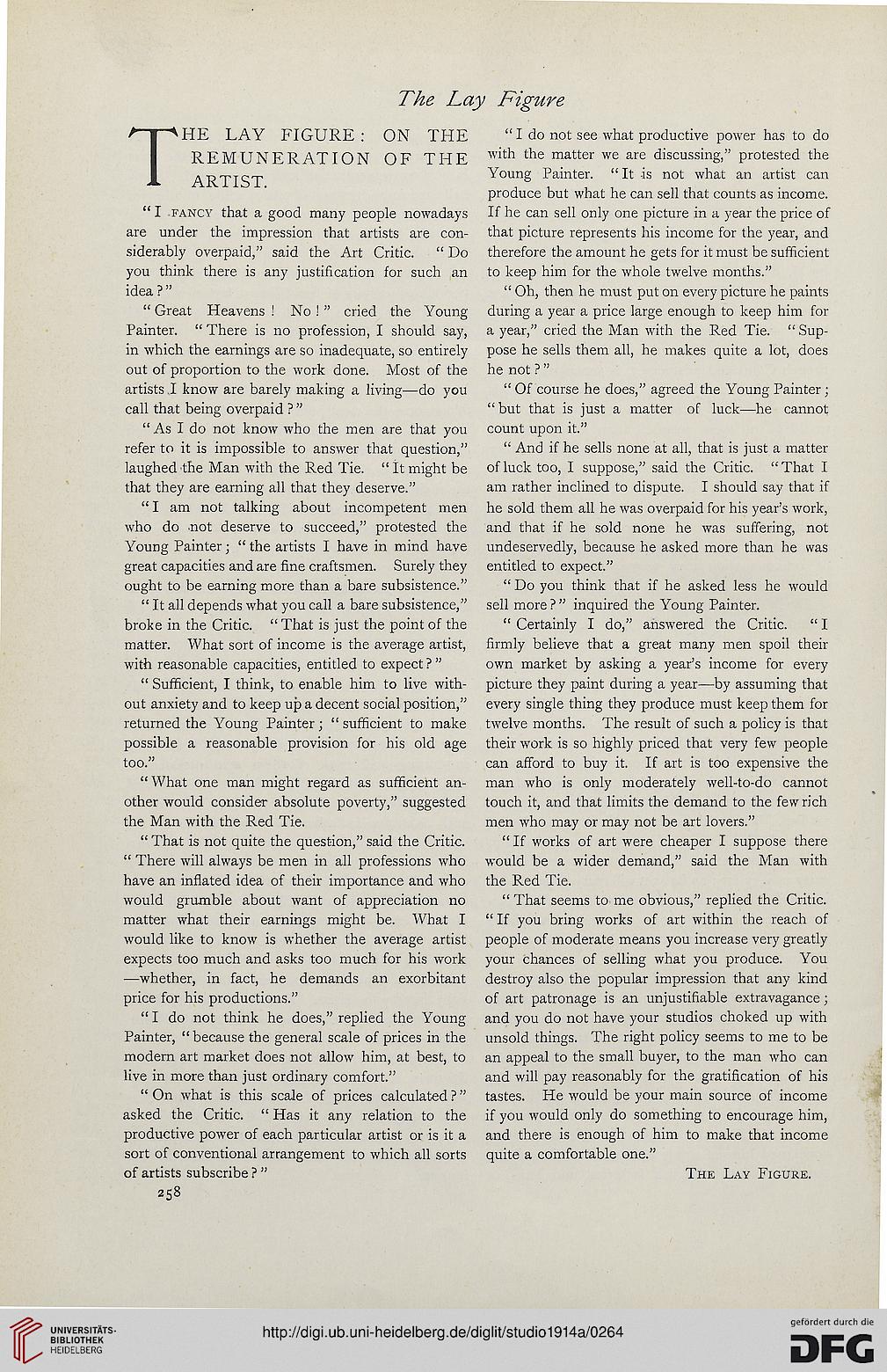 THE LAY FIGURE : ON THE
REMUNERATION OF THE
ARTIST.

" I fancy that a good many people nowadays
are under the impression that artists are con-
siderably overpaid," said the Art Critic. " Do
you think there is any justification for such an
idea?"

" Great Heavens ! No ! " cried the Young
Painter. " There is no profession, I should say,
in which the earnings are so inadequate, so entirely
out of proportion to the work done. Most of the
artists I know are barely making a living—do you
call that being overpaid ? "

" As I do not know who the men are that you
refer to it is impossible to answer that question,"
laughed the Man with the Red Tie. " It might be
that they are earning all that they deserve."

" I am not talking about incompetent men
who do .not deserve to succeed," protested the
Young Painter; " the artists I have in mind have
great capacities and are fine craftsmen. Surely they
ought to be earning more than a bare subsistence."

" It all depends what you call a bare subsistence,"
broke in the Critic. " That is just the point of the
matter. What sort of income is the average artist,
with reasonable capacities, entitled to expect ? "

" Sufficient, I think, to enable him to live with-
out anxiety and to keep up a decent social position,"
returned the Young Painter; " sufficient to make
possible a reasonable provision for his old age
too."

" What one man might regard as sufficient an-
other would consider absolute poverty," suggested
the Man with the Red Tie.

" That is not quite the question," said the Critic.
" There will always be men in all professions who
have an inflated idea of their importance and who
would grumble about want of appreciation no
matter what their earnings might be. What I
would like to know is whether the average artist
expects too much and asks too much for his work
—whether, in fact, he demands an exorbitant
price for his productions."

" I do not think he does," replied the Young
Painter, " because the general scale of prices in the
modern art market does not allow him, at best, to
live in more than just ordinary comfort."

" On what is this scale of prices calculated ?"
asked the Critic. " Has it any relation to the
productive power of each particular artist or is it a
sort of conventional arrangement to which all sorts
of artists subscribe ? "
258

" I do not see what productive power has to do
with the matter we are discussing," protested the
Young Painter. " It is not what an artist can
produce but what he can sell that counts as income.
If he can sell only one picture in a year the price of
that picture represents his income for the year, and
therefore the amount he gets for it must be sufficient
to keep him for the whole twelve months."

" Oh, then he must put on every picture he paints
during a year a price large enough to keep him for
a year," cried the Man with the Red Tie. " Sup-
pose he sells them all, he makes quite a lot, does
he not ? "

" Of course he does," agreed the Young Painter;
"but that is just a matter of luck—he cannot
count upon it."

" And if he sells none at all, that is just a matter
of luck too, I suppose," said the Critic. "That I
am rather inclined to dispute. I should say that if
he sold them all he was overpaid for his year's work,
and that if he sold none he was suffering, not
undeservedly, because he asked more than he was
entitled to expect."

" Do you think that if he asked less he would
sell more ? " inquired the Young Painter.

" Certainly I do," answered the Critic. " I
firmly believe that a great many men spoil their
own market by asking a year's income for every
picture they paint during a year—by assuming that
every single thing they produce must keep them for
twelve months. The result of such a policy is that
their work is so highly priced that very few people
can afford to buy it. If art is too expensive the
man who is only moderately well-to-do cannot
touch it, and that limits the demand to the few rich
men who may or may not be art lovers."

" If works of art were cheaper I suppose there
would be a wider demand," said the Man with
the Red Tie.

" That seems to me obvious," replied the Critic.
" If you bring works of art within the reach of
people of moderate means you increase very greatly
your chances of selling what you produce. You
destroy also the popular impression that any kind
of art patronage is an unjustifiable extravagance ;
and you do not have your studios choked up with
unsold things. The right policy seems to me to be
an appeal to the small buyer, to the man who can
and will pay reasonably for the gratification of his
tastes. He would be your main source of income
if you would only do something to encourage him,
and there is enough of him to make that income
quite a comfortable one."