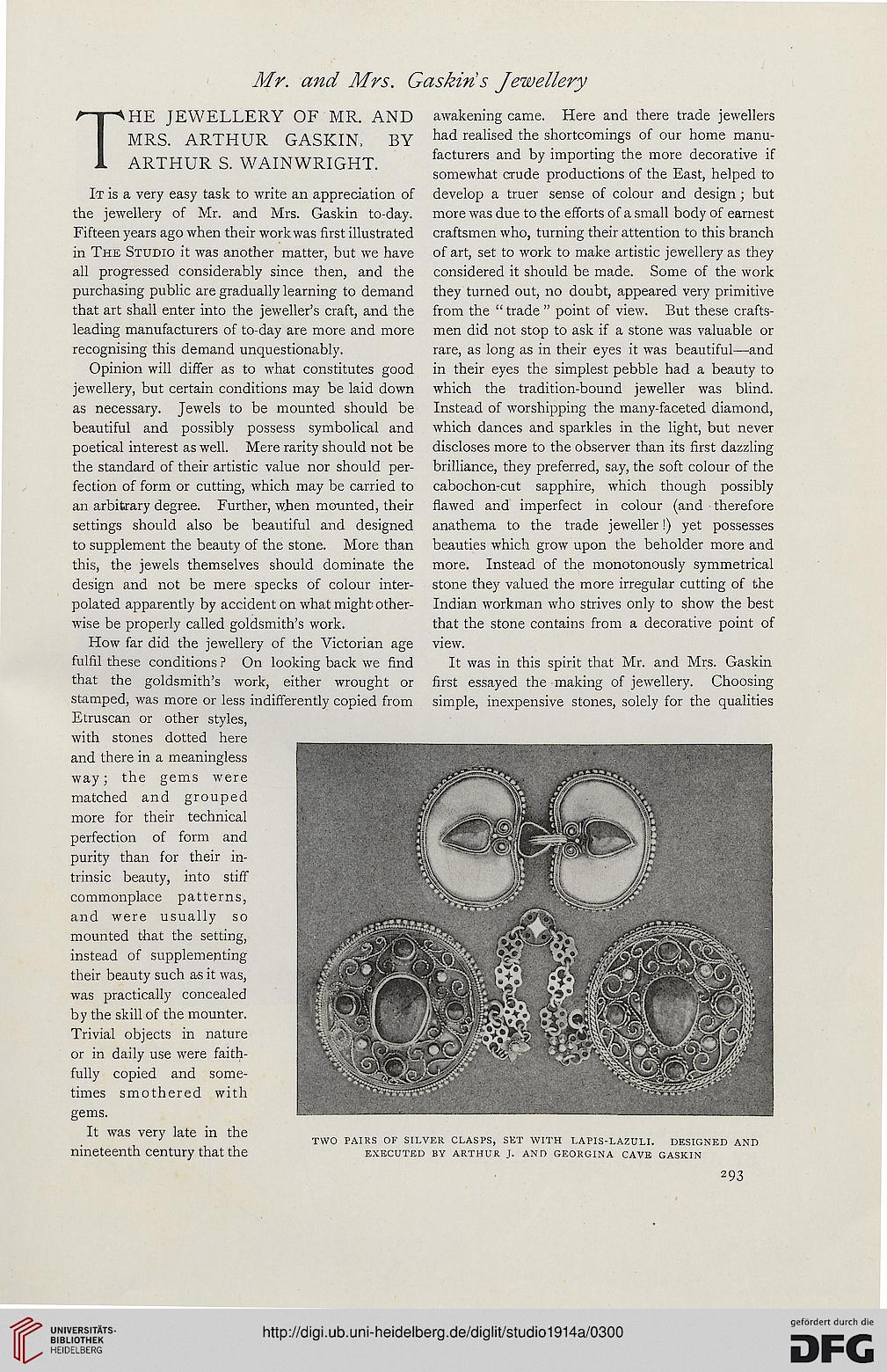 THE JEWELLERY OF MR. AND awakening came. Here and there trade jewellers
MRS ARTHUR GASKIN BY ^ad realised the shortcomings of our home manu-
. T_„TTTT_1 _TT T,TTTTT-.T„TT~ facturers and by importing the more decorative if

It is a very easy task to write an appreciation of develop a truer sense of colour and design ; but
the jewellery of Mr. and Mrs. Gaskin to-day. more was due to the efforts of a small body of earnest
Fifteen years ago when their workwas first illustrated craftsmen who, turning their attention to this branch
in The Studio it was another matter, but we have of art, set to work to make artistic jewellery as they
all progressed considerably since then, and the considered it should be made. Some of the work
purchasing public are gradually learning to demand they turned out, no doubt, appeared very primitive
that art shall enter into the jeweller's craft, and the from the " trade " point of view. But these crafts-
leading manufacturers of to-day are more and more men did not stop to ask if a stone was valuable or
recognising this demand unquestionably. rare, as long as in their eyes it was beautiful—and

Opinion will differ as to what constitutes good in their eyes the simplest pebble had a beauty to
jewellery, but certain conditions may be laid down which the tradition-bound jeweller was blind,
as necessary. Jewels to be mounted should be Instead of worshipping the many-faceted diamond,
beautiful and possibly possess symbolical and which dances and sparkles in the light, but never
poetical interest as well. Mere rarity should not be discloses more to the observer than its first dazzling
the standard of their artistic value nor should per- brilliance, they preferred, say, the soft colour of the
fection of form or cutting, which may be carried to cabochon-cut sapphire, which though possibly
an arbitrary degree. Further, when mounted, their flawed and imperfect in colour (and therefore
settings should also be beautiful and designed anathema to the trade jeweller!) yet possesses
to supplement the beauty of the stone. More than beauties which grow upon the beholder more and
this, the jewels themselves should dominate the more. Instead of the monotonously symmetrical
design and not be mere specks of colour inter- stone they valued the more irregular cutting of the
polated apparently by accident on what might: other- Indian workman who strives only to show the best
wise be properly called goldsmith's work. that the stone contains from a decorative point of

How far did the jewellery of the Victorian age view,
fulfil these conditions ? On looking back we find It was in this spirit that Mr. and Mrs. Gaskin
that the goldsmith's work, either wrought or first essayed the making of jewellery. Choosing
stamped, was more or less indifferently copied from simple, inexpensive stones, solely for the qualities
Etruscan or other styles,

and there in a meaningless
way; the gems were
matched and grouped
more for their technical
perfection of form and
purity than for their in-
trinsic beauty, into stiff
commonplace patterns,
and were usually so
mounted that the setting,
instead of supplementing
their beauty such as it was,
was practically concealed
by the skill of the mounter.
Trivial objects in nature
or in daily use were faith-
fully copied and some-
times smothered with
gems.

It was verv late in the

3 two pairs of silver clasps, set with lapis-lazuli. designed and

nineteenth century that the executed by Arthur j. and geokgina cave gaskin