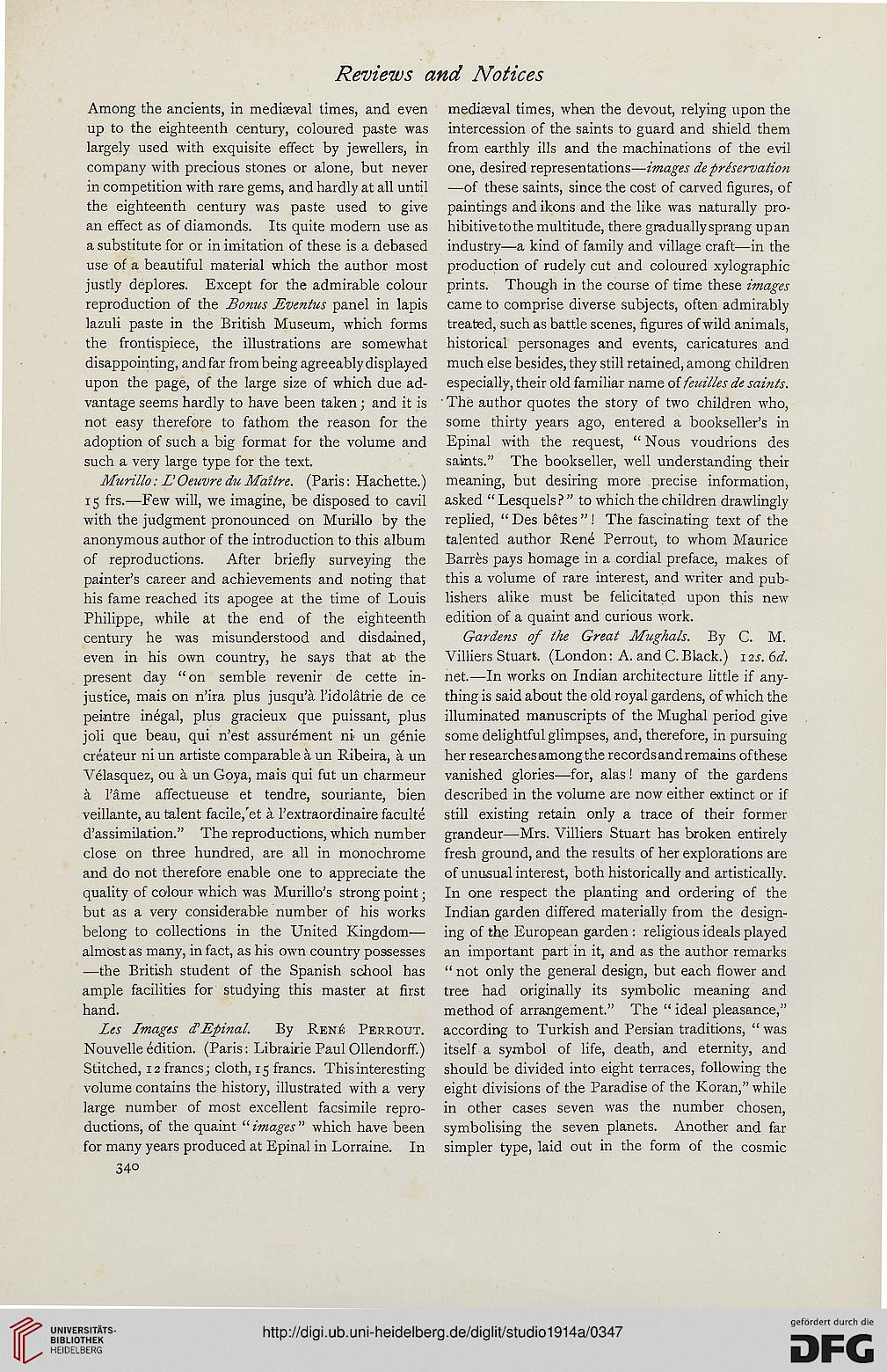 Among the ancients, in mediaeval times, and even
up to the eighteenth century, coloured paste was
largely used with exquisite effect by jewellers, in
company with precious stones or alone, but never
in competition with rare gems, and hardly at all until
the eighteenth century was paste used to give
an effect as of diamonds. Its quite modern use as
a substitute for or in imitation of these is a debased
use of a beautiful material which the author most
justly deplores. Except for the admirable colour
reproduction of the Bonus Eventus panel in lapis
lazuli paste in the British Museum, which forms
the frontispiece, the illustrations are somewhat
disappointing, and far from being agreeably displayed
upon the page, of the large size of which due ad-
vantage seems hardly to have been taken; and it is
not easy therefore to fathom the reason for the
adoption of such a big format for the volume and
such a very large type for the text.

Murillo: LOeuvre du Maitre. (Paris: Hachette.)
15 frs.—Few will, we imagine, be disposed to cavil
with the judgment pronounced on Murillo by the
anonymous author of the introduction to this album
of reproductions. After briefly surveying the
painter's career and achievements and noting that
his fame reached its apogee at the time of Louis
Philippe, while at the end of the eighteenth
century he was misunderstood and disdained,
even in his own country, he says that at the
present day "on semble revenir de cette in-
justice, mais on n'ira plus jusqu'a 1'idolatrie de ce
peintre inegal, plus gracieux que puissant, plus
joli que beau, qui n'est assurement ni< un genie
createur ni un artiste comparable a. un Ribeira, a. un
Velasquez, ou a un Goya, mais qui fut un charmeur
a Fame affectueuse et tendre, souriante, bien
veillante, au talent facile,'et a l'extraordinaire faculte
d'assimilation." The reproductions, which number
close on three hundred, are all in monochrome
and do not therefore enable one to appreciate the
quality of colour which was Murillo's strong point;
but as a very considerable number of his works
belong to collections in the United Kingdom—
almost as many, in fact, as his own country possesses
—the British student of the Spanish school has
ample facilities for studying this master at first
hand.

Les Images d'Epinal. By Rene Perrout.
Nouvelle edition. (Paris: Librairie Paul Ollendorff.)
Stitched, 12 francs; cloth, 15 francs. This interesting
volume contains the history, illustrated with a very
large number of most excellent facsimile repro-
ductions, of the quaint "images" which have been
for many years produced at Epinal in Lorraine. In
34o

mediaeval times, when the devout, relying upon the
intercession of the saints to guard and shield them
from earthly ills and the machinations of the evil
one, desired representations—images de preservation
—of these saints, since the cost of carved figures, of
paintings and ikons and the like was naturally pro-
hibitive to the multitude, there gradually sprang upan
industry—a kind of family and village craft—in the
production of rudely cut and coloured xylographic
prints. Though in the course of time these images
came to comprise diverse subjects, often admirably
treated, such as battle scenes, figures of wild animals,
historical personages and events, caricatures and
much else besides, they still retained, among children
especially, their old familiar name of feuilles de saints.
• The author quotes the story of two children who,
some thirty years ago, entered a bookseller's in
Epinal with the request, " Nous voudrions des
saints." The bookseller, well understanding their
meaning, but desiring more precise information,
asked " Lesquels? " to which the children drawlingly
replied, " Des betes "! The fascinating text of the
talented author Rene Perrout, to whom Maurice
Barres pays homage in a cordial preface, makes of
this a volume of rare interest, and writer and pub-
lishers alike must be felicitated upon this new
edition of a quaint and curious work.

Gardens of the Great Mughals. By C. M.
Villiers Stuart. (London: A. and C.Black.) -12s. 6d.
net.—In works on Indian architecture little if any-
thing is said about the old royal gardens, of which the
illuminated manuscripts of the Mughal period give
some delightful glimpses, and, therefore, in pursuing
her researches among the recordsandremains ofthese
vanished glories—for, alas! many of the gardens
described in the volume are now either extinct or if
still existing retain only a trace of their former
grandeur—Mrs. Villiers Stuart has broken entirely
fresh ground, and the results of her explorations are
of unusual interest, both historically and artistically.
In one respect the planting and ordering of the
Indian garden differed materially from the design-
ing of the European garden : religious ideals played
an important part in it, and as the author remarks
" not only the general design, but each flower and
tree had originally its symbolic meaning and
method of arrangement." The " ideal pleasance,"
according to Turkish and Persian traditions, " was
itself a symbol of life, death, and eternity, and
should be divided into eight terraces, following the
eight divisions of the Paradise of the Koran," while
in other cases seven was the number chosen,
symbolising the seven planets. Another and far
simpler type, laid out in the form of the cosmic