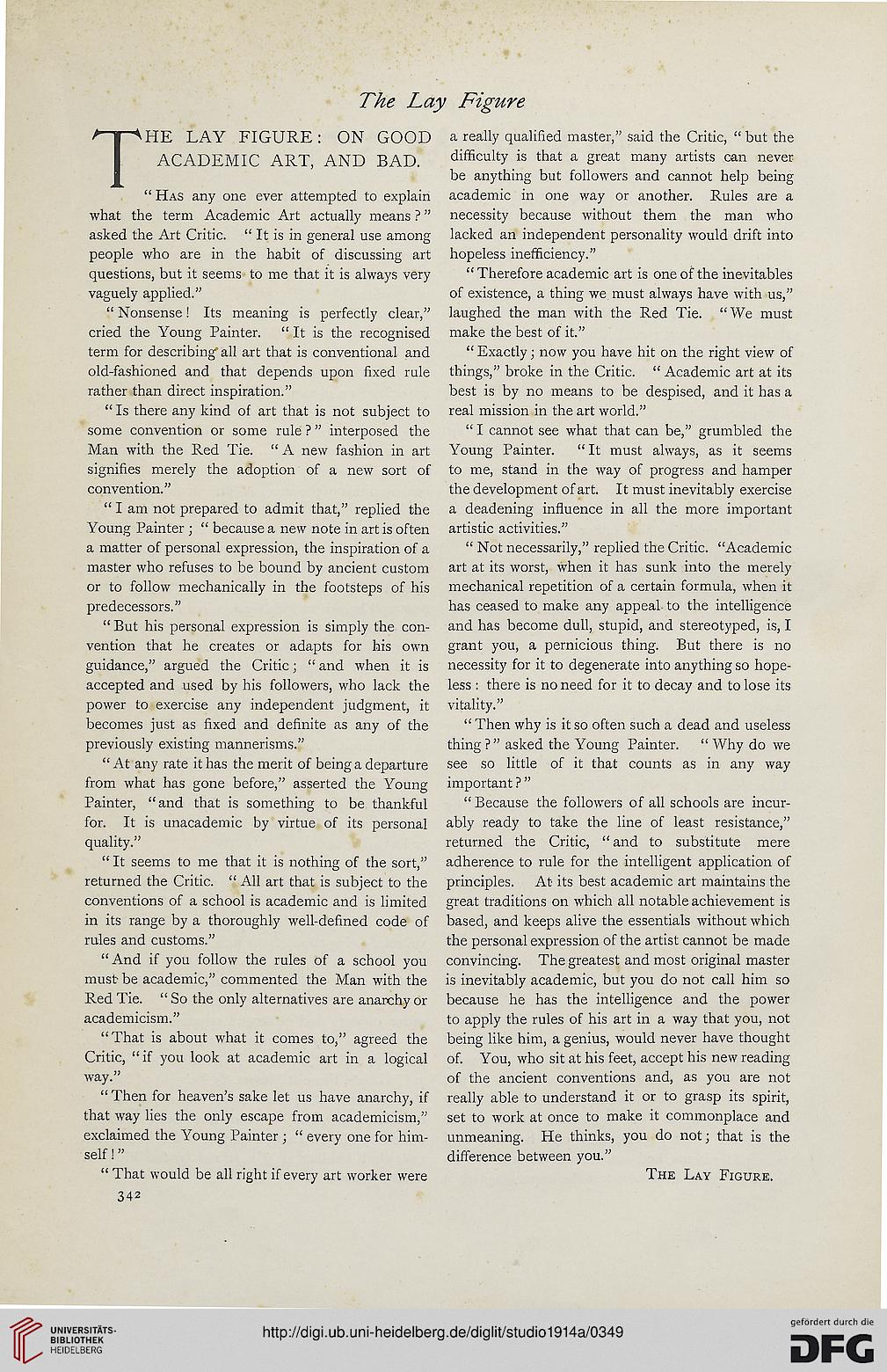 THE LAY FIGURE: ON GOOD
ACADEMIC ART, AND BAD.

" Has any one ever attempted to explain
what the term Academic Art actually means ?"
asked the Art Critic. " It is in general use among
people who are in the habit of discussing art
questions, but it seems to me that it is always very
vaguely applied."

" Nonsense! Its meaning is perfectly clear,"
cried the Young Painter. " It is the recognised
term for describing'all art that is conventional and
old-fashioned and that depends upon fixed rule
rather than direct inspiration."

" Is there any kind of art that is not subject to
some convention or some rule ?" interposed the
Man with the Red Tie. " A new fashion in art
signifies merely the adoption of a new sort of
convention."

" I am not prepared to admit that," replied the
Young Painter ; " because a new note in art is often
a matter of personal expression, the inspiration of a
master who refuses to be bound by ancient custom
or to follow mechanically in the footsteps of his
predecessors."

" But his personal expression is simply the con-
vention that he creates or adapts for his own
guidance," argued the Critic; " and when it is
accepted and used by his followers, who lack the
power to exercise any independent judgment, it
becomes just as fixed and definite as any of the
previously existing mannerisms."

" At any rate it has the merit of being a departure
from what has gone before," asserted the Young
Painter, "and that is something to be thankful
for. It is unacademic by virtue of its personal
quality."

" It seems to me that it is nothing of the sort,"
returned the Critic. " All art that is subject to the
conventions of a school is academic and is limited
in its range by a thoroughly well-defined code of
rules and customs."

"And if you follow the rules of a school you
must- be academic," commented the Man with the
Red Tie. " So the only alternatives are anarchy or
academicism."

"That is about what it comes to," agreed the
Critic, "if you look at academic art in a logical
way."

" Then for heaven's sake let us have anarchy, if
that way lies the only escape from academicism,"
exclaimed the Young Painter ; " every one for him-
self !"

" That would be all right if every art worker were
342

a really qualified master," said the Critic, " but the
difficulty is that a great many artists can never
be anything but followers and cannot help being
academic in one way or another. Rules are a
necessity because without them the man who
lacked an independent personality would drift into
hopeless inefficiency."

" Therefore academic art is one of the inevitables
of existence, a thing we must always have with us,"
laughed the man with the Red Tie. "We must
make the best of it."

" Exactly; now you have hit on the right view of
things," broke in the Critic. " Academic art at its
best is by no means to be despised, and it has a
real mission in the art world."

" I cannot see what that can be," grumbled the
Young Painter. " It must always, as it seems
to me, stand in the way of progress and hamper
the development of art. It must inevitably exercise
a deadening influence in all the more important
artistic activities."

" Not necessarily," replied the Critic. "Academic
art at its worst, when it has sunk into the merely
mechanical repetition of a certain formula, when it
has ceased to make any appeal to the intelligence
and has become dull, stupid, and stereotyped, is, I
grant you, a pernicious thing. But there is no
necessity for it to degenerate into anything so hope-
less : there is no need for it to decay and to lose its
vitality."

" Then why is it so often such a dead and useless
thing ?" asked the Young Painter. " Why do we
see so little of it that counts as in any way
important ? "

" Because the followers of all schools are incur-
ably ready to take the line of least resistance,"
returned the Critic, "and to substitute mere
adherence to rule for the intelligent application of
principles. At its best academic art maintains the
great traditions on which all notable achievement is
based, and keeps alive the essentials without which
the personal expression of the artist cannot be made
convincing. The greatest and most original master
is inevitably academic, but you do not call him so
because he has the intelligence and the power
to apply the rules of his art in a way that you, not
being like him, a genius, would never have thought
of. You, who sit at his feet, accept his new reading
of the ancient conventions and, as you are not
really able to understand it or to grasp its spirit,
set to work at once to make it commonplace and
unmeaning. He thinks, you do not; that is the
difference between you."