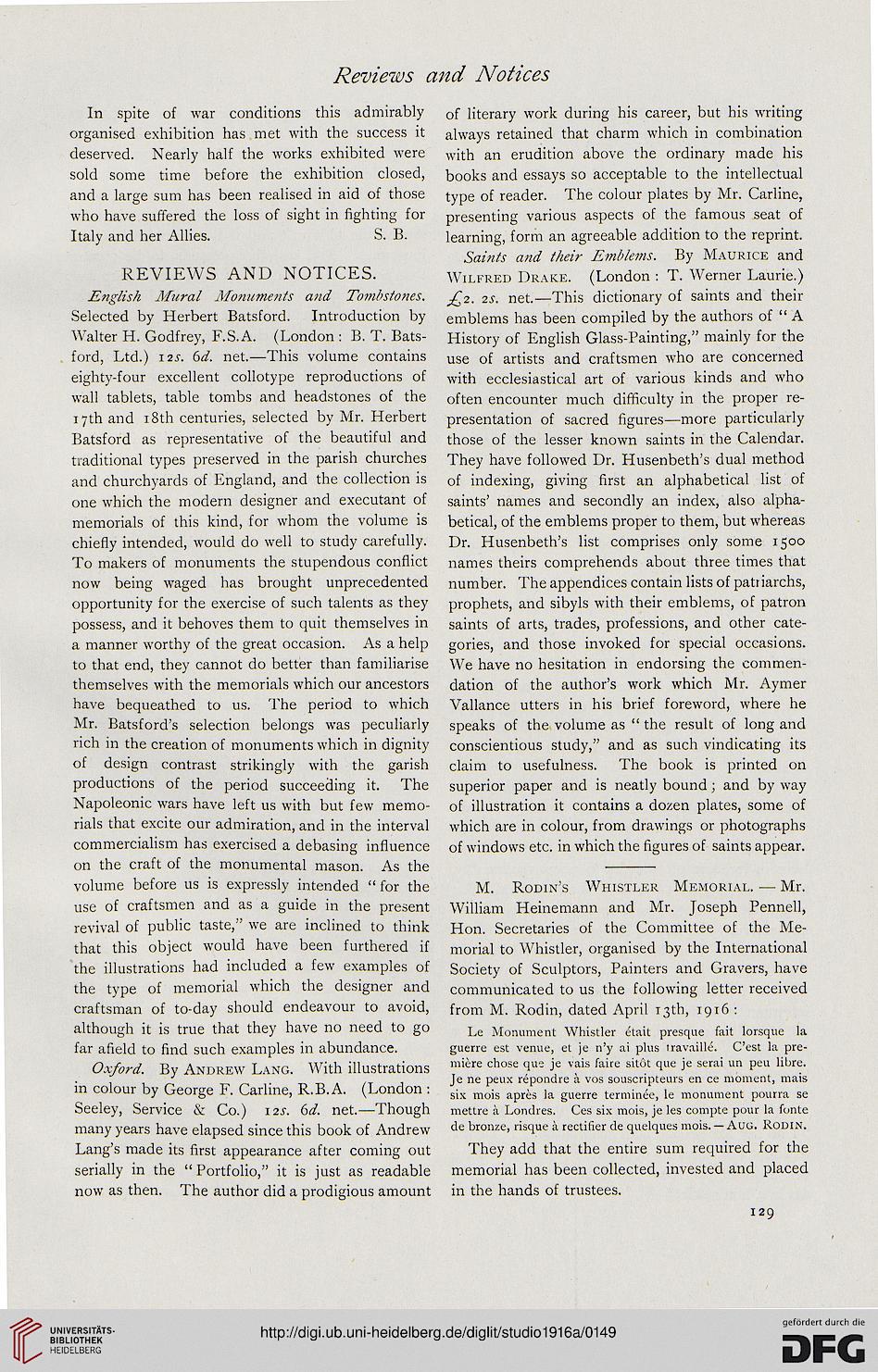 In spite of war conditions this admirably
organised exhibition has met with the success it
deserved. Nearly half the works exhibited were
sold some time before the exhibition closed,
and a large sum has been realised in aid of those
who have suffered the loss of sight in fighting for
Italy and her Allies. S. B.

English Mural Monuments and Tombstones.
Selected by Herbert Batsford. Introduction by
Walter H. Godfrey, F.S.A. (London : B. T. Bats-
ford, Ltd.) \2S. 6d. net.—This volume contains
eighty-four excellent collotype reproductions of
wall tablets, table tombs and headstones of the
17th and 18th centuries, selected by Mr. Herbert
Batsford as representative of the beautiful and
traditional types preserved in the parish churches
and churchyards of England, and the collection is
one which the modern designer and executant of
memorials of this kind, for whom the volume is
chiefly intended, would do well to study carefully.
To makers of monuments the stupendous conflict
now being waged has brought unprecedented
opportunity for the exercise of such talents as they
possess, and it behoves them to quit themselves in
a manner worthy of the great occasion. As a help
to that end, they cannot do better than familiarise
themselves with the memorials which our ancestors
have bequeathed to us. The period to which
Mr. Batsford's selection belongs was peculiarly
rich in the creation of monuments which in dignity
of design contrast strikingly with the garish
productions of the period succeeding it. The
Napoleonic wars have left us with but few memo-
rials that excite our admiration, and in the interval
commercialism has exercised a debasing influence
on the craft of the monumental mason. As the
volume before us is expressly intended " for the
use of craftsmen and as a guide in the present
revival of public taste," we are inclined to think
that this object would have been furthered if
the illustrations had included a few examples of
the type of memorial which the designer and
craftsman of to-day should endeavour to avoid,
although it is true that they have no need to go
far afield to find such examples in abundance.

Oxford. By Andrew Lang. With illustrations
in colour by George F. Carline, R.B.A. (London :
Seeley, Service & Co.) \2S. 6d. net.—Though
many years have elapsed since this book of Andrew
Lang's made its first appearance after coming out
serially in the "Portfolio," it is just as readable
now as then. The author did a prodigious amount

of literary work during his career, but his writing
always retained that charm which in combination
with an erudition above the ordinary made his
books and essays so acceptable to the intellectual
type of reader. The colour plates by Mr. Carline,
presenting various aspects of the famous seat of
learning, form an agreeable addition to the reprint.

Saints and their Emblems. By Maurice and
Wilfred Drake. (London : T. Werner Laurie.)
£2. 2S. net.—This dictionary of saints and their
emblems has been compiled by the authors of " A
History of English Glass-Painting," mainly for the
use of artists and craftsmen who are concerned
with ecclesiastical art of various kinds and who
often encounter much difficulty in the proper re-
presentation of sacred figures—more particularly
those of the lesser known saints in the Calendar.
They have followed Dr. Husenbeth's dual method
of indexing, giving first an alphabetical list of
saints' names and secondly an index, also alpha-
betical, of the emblems proper to them, but whereas
Dr. Husenbeth's list comprises only some 1500
names theirs comprehends about three times that
number. The appendices contain lists of patriarchs,
prophets, and sibyls with their emblems, of patron
saints of arts, trades, professions, and other cate-
gories, and those invoked for special occasions.
We have no hesitation in endorsing the commen-
dation of the author's work which Mr. Aymer
Vallance utters in his brief foreword, where he
speaks of the volume as " the result of long and
conscientious study," and as such vindicating its
claim to usefulness. The book is printed on
superior paper and is neatly bound ; and by way
of illustration it contains a dozen plates, some of
which are in colour, from drawings or photographs
of windows etc. in which the figures of saints appear.

M. Rodin's Whistler Memorial. — Mr.
William Heinemann and Mr. Joseph Pennell,
Hon. Secretaries of the Committee of the Me-
morial to Whistler, organised by the International
Society of Sculptors, Painters and Gravers, have
communicated to us the following letter received
from M. Rodin, dated April 13th, 1916 :

They add that the entire sum required for the
memorial has been collected, invested and placed
in the hands of trustees.