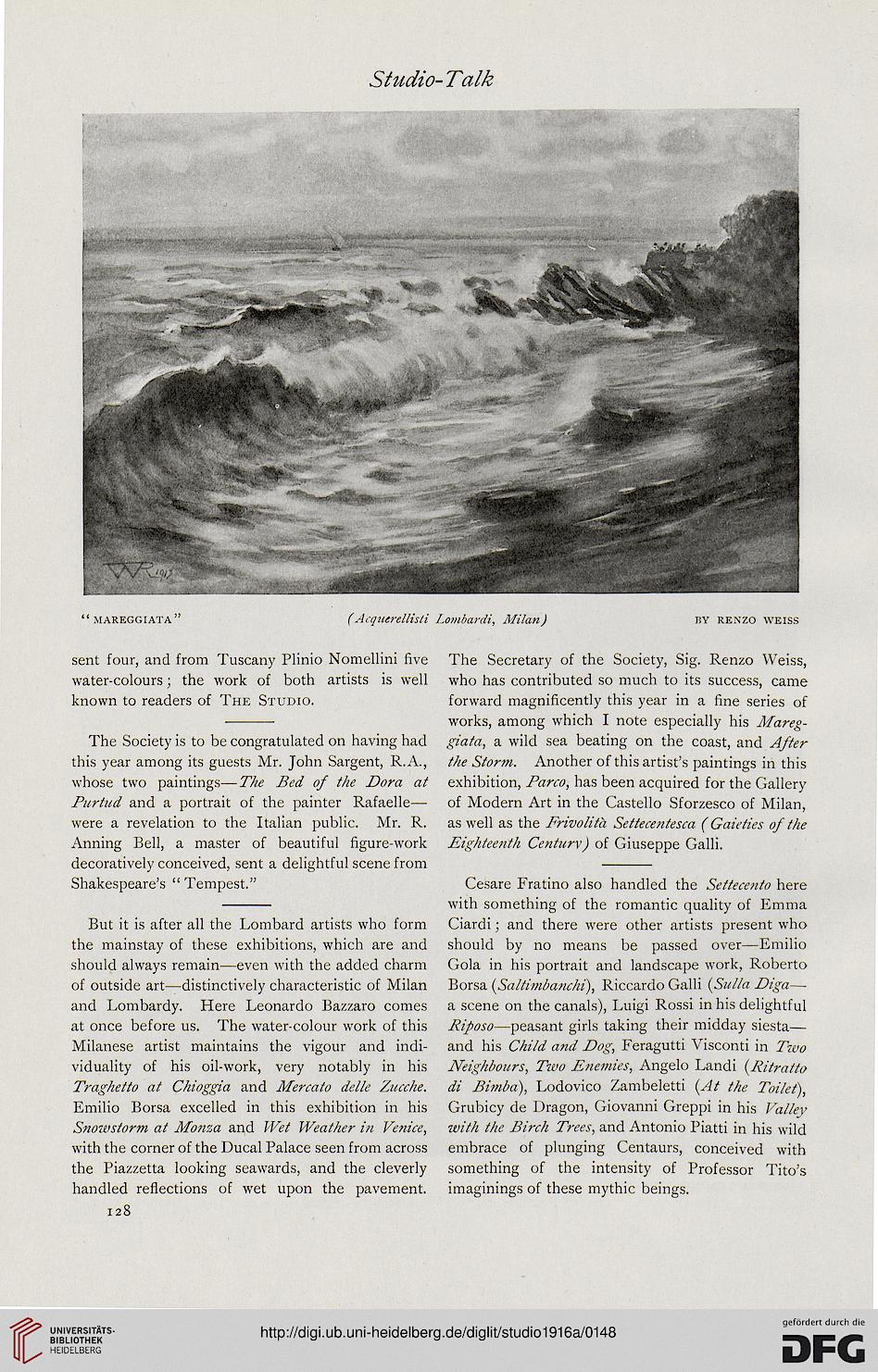 sent four, and from Tuscany Plinio Nomellini five
water-colours; the work of both artists is well
known to readers of The Studio.

The Society is to be congratulated on having had
this year among its guests Mr. John Sargent, R.A.,
whose two paintings—The Bed of the Dora at
Purtud and a portrait of the painter Rafaelle—
were a revelation to the Italian public. Mr. R.
Anning Bell, a master of beautiful figure-work
decoratively conceived, sent a delightful scene from
Shakespeare's " Tempest."

But it is after all the Lombard artists who form
the mainstay of these exhibitions, which are and
should always remain—even with the added charm
of outside art—distinctively characteristic of Milan
and Lombardy. Here Leonardo Bazzaro comes
at once before us. The water-colour work of this
Milanese artist maintains the vigour and indi-
viduality of his oil-work, very notably in his
Traghetto at Chioggia and Mercato delle Zucche.
Emilio Borsa excelled in this exhibition in his
Snowstorm at Monza and Wet Weather in Venice,
with the corner of the Ducal Palace seen from across
the Piazzetta looking seawards, and the cleverly
handled reflections of wet upon the pavement.
128

The Secretary of the Society, Sig. Renzo Weiss,
who has contributed so much to its success, came
forward magnificently this year in a fine series of
works, among which I note especially his Mareg-
giata, a wild sea beating on the coast, and After
the Storm. Another of this artist's paintings in this
exhibition, Parco, has been acquired for the Gallery
of Modern Art in the Castello Sforzesco of Milan,
as well as the Frivolita Settecentesca (Gaieties of the
Eighteenth Century) of Giuseppe Galli.

Cesare Fratino also handled the Settecento here
with something of the romantic quality of Emma
Ciardi; and there were other artists present who
should by no means be passed over—Emilio
Gola in his portrait and landscape work, Roberto
Borsa (Saltimbanchi), Riccardo Galli {Sulla Diga—
a scene on the canals), Luigi Rossi in his delightful
Riposo—peasant girls taking their midday siesta—
and his Child and Dog, Feragutti Visconti in Two
Neighbours, Two Enemies, Angelo Landi (Ritratto
di Bimba), Lodovico Zambeletti {At the Toilet),
Grubicy de Dragon, Giovanni Greppi in his Valley
with the Birch Trees, and Antonio Piatti in his wild
embrace of plunging Centaurs, conceived with
something of the intensity of Professor Tito's
imaginings of these mythic beings.