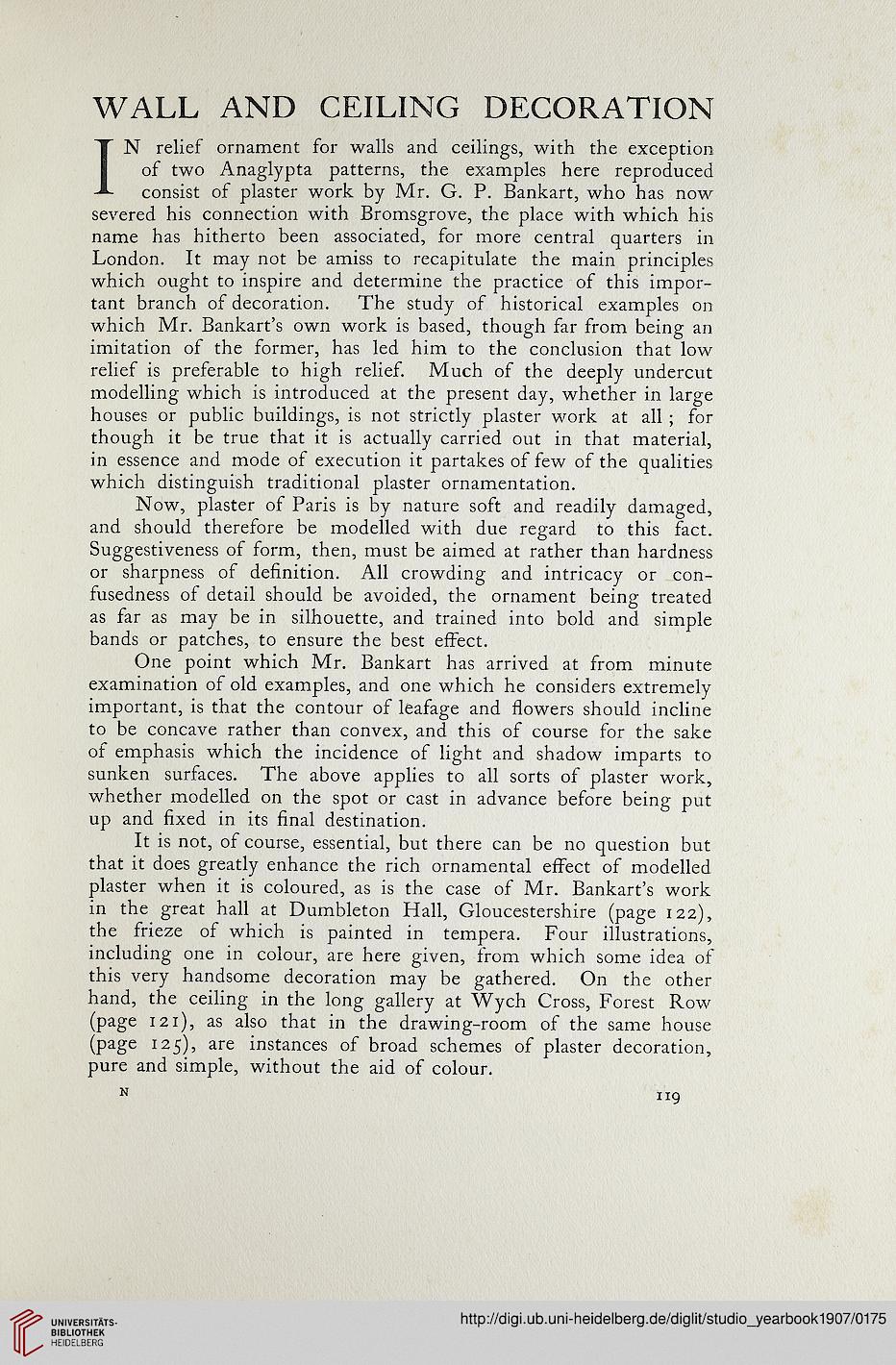 IN relief ornament for walls and ceilings, with the exception
of two Anaglypta patterns, the examples here reproduced
consist of plaster work by Mr. G. P. Bankart, who has now
severed his connection with Bromsgrove, the place with which his
name has hitherto been associated, for more central quarters in
London. It may not be amiss to recapitulate the main principles
which ought to inspire and determine the practice of this impor-
tant branch of decoration. The study of historical examples on
which Mr. Bankart’s own work is based, though far from being an
imitation of the former, has led him to the conclusion that low
relief is preferable to high relief. Much of the deeply undercut
modelling which is introduced at the present day, whether in large
houses or public buildings, is not strictly plaster work at all ; for
though it be true that it is actually carried out in that material,
in essence and mode of execution it partakes of few of the qualities
which distinguish traditional plaster ornamentation.

Now, plaster of Paris is by nature soft and readily damaged,
and should therefore be modelled with due regard to this fact.
Suggestiveness of form, then, must be aimed at rather than hardness
or sharpness of definition. All crowding and intricacy or con-
fusedness of detail should be avoided, the ornament being treated
as far as may be in silhouette, and trained into bold and simple
bands or patches, to ensure the best effect.

One point which Mr. Bankart has arrived at from minute
examination of old examples, and one which he considers extremely
important, is that the contour of leafage and flowers should incline
to be concave rather than convex, and this of course for the sake
of emphasis which the incidence of light and shadow imparts to
sunken surfaces. The above applies to all sorts of plaster work,
whether modelled on the spot or cast in advance before being put
up and fixed in its final destination.

It is not, of course, essential, but there can be no question but
that it does greatly enhance the rich ornamental effect of modelled
plaster when it is coloured, as is the case of Mr. Bankart’s work
in the great hall at Dumbleton Hall, Gloucestershire (page 122),
the frieze of which is painted in tempera. Four illustrations,
including one in colour, are here given, from which some idea of
this very handsome decoration may be gathered. On the other
hand, the ceiling in the long gallery at Wych Cross, Forest Row
(page 121), as also that in the drawing-room of the same house
(page 125), are instances of broad schemes of plaster decoration,
pure and simple, without the aid of colour.