Right down to the text

Bibliotheca Palatina – The Story of a World-Famous Library

The origins of the Bibliotheca Palatina, the state library of the Palatinate, date back to the founding of Heidelberg University in 1386. In the wake of the University's establishment libraries grew up around the high Faculties of Theology, Law and Medicine, in addition to the less elevated Artists' Library. Other institutions, originally independent, were gradually absorbed into the Bibliotheca Palatina as time went on: the so-called Abbey Library, donated in the will of Louis III, and the private book collections of the Electors out of Heidelberg Castle. It was during the reign of the book-loving Elector Otto-Henry that these disparate inventories were first united, in the galleries of the Heiliggeistkirche (Church of the Holy Spirit). The sack of Heidelberg during the Thirty Years' War, in 1622, brought a temporary end to the then most renowned and important collection of books in all of Germany. 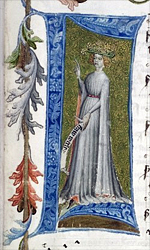 Not least thanks to the great array of theological (chiefly Protestant) literature that it contained, this treasure trove of manuscripts was lauded far and wide as 'the mother of all libraries' during its heyday in the 16th and 17th centuries. Notably, its riches made it an object of great desire for the Catholic factions in the Thirty Years' War: early on in the conflict Pope Gregory XV had made it very clear that, in the event of a military victory over the Palatinate (which had become a spearhead of the Protestant Union under its Elector Frederick V, now crowned as the “Winter King”), he would demand the surrender of the entire library and take it away as spoils of war. Duke Maximilian I of Bavaria belonged to the same aristocratic family as the Palatine Electors, the House of Wittelsbach – but in the war he stood against them as a member of the Catholic League, and he was unable to oppose such a firm decision by his commander-in-chief and primary financial sponsor. 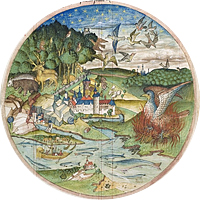 The Journey to Rome and Storage in the Vatican

And so it was that Leo Allatius, the Scriptor for Greek at the Vatican Library, found himself in Heidelberg in the December of 1622. Following the capture of the Palatinate and Heidelberg by the Count of Tilly, Allatius had been instructed to organise the Bibliotheca Palatina for transportation to Rome. It was a task that would only take him until January to complete. Even more impressive than this, as he himself boasted, was that the Pope had sent him to fetch one library... but he was coming home with three. As well as the books in the Heiliggeistkirche – the 'actual' Bibliotheca Palatina – he had also secured stores from the Castle and, consequently, the private library of the Electors and various books belonging to the University. Not even the personal collection of the Palatina's last librarian, Jan Gruter, was safe from him in his zeal. Just as Pope Gregory had wanted, Allatius had his hands on the combined literary wealth of the entire Palatinate. He set out for Rome in mid-February of 1623, taking the books via Munich, where Maximilian – now an Elector – had them fitted with specially-made bookplates.

Packed into 196 crates and carried by mules, the treasure of Heidelberg began its perilous journey over the Alps. Delays caused by the weather meant that it took until May 25th for the convoy to reach Lake Como. Even on Italian soil it made but slow progress: the Pope died in July, which meant a long wait for any financial recompense for the cost of the trip. In the end, the Vatican took possession of 184 crates of books (Allatius had set 12 crates aside for himself) on August 9th, 1623: the journey had taken almost six months. Upon arriving in their new home, the manuscripts and prints of the 'Bibliotheca Palatina' were split up and sorted into the pre-existing categories of the Vatican's collection. The Latin, Greek, German and Hebrew manuscripts were, however, shelved separately and assigned special catalogue codes: Cod. Pal. lat. (Codex Palatinus latinus), Cod. Pal. graec. (Codex Palatinus graecus), Cod. Pal. germ. (Codex Palatinus germanicus) and Cod. Pal. ebr. (Codex Palatinus ebraicus).

Attempts at Recovery; A Part of the Library Returns To Heidelberg

In the following two centuries, repeated attempts were made by various parties to bring the texts of the Bibliotheca Palatina back to Heidelberg. Yet it was only in the aftermath of another great European war that at least the 847 German-language manuscripts could be returned to their old home: in 1816, by means of a settlement made during the Congress of Vienna. They were brought to the main University building, the so-called 'Domus Wilhelmiana' (today known as the Old University), which at that time was also serving as the University library. To this day, apart from 29 Greek and 16 Latin codices, the rest of the non-German manuscripts and all the prints reside in the vaults of the Biblioteca Apostolica Vaticana in Rome.

The world-famous 'Great Heidelberg Songbook', also known as the Codex Manesse, was probably among the personal effects that Frederick V took with him when he fled. It never found its way to Rome, and was returned to its old resting-place in Heidelberg, by a somewhat convoluted route, in 1888. Since then it has been in the care of the University Library, and remains one of its greatest treasures (Cod. Pal. germ. 848).