Right down to the text

The "Codex Manesse", also known as the "Great Heidelberg Book of Songs" (Cod. Pal. germ. 848), was created between around 1300 and around 1340 in Zurich and is the most comprehensive collection of ballads and epigrammatic poetry in Middle High German language. 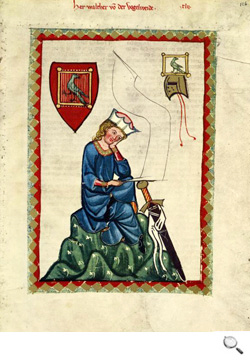 The manuscript contains almost 6,000 verses from 140 poets. Its core was formed around 1300 in Zurich. The large collection of Middle High German lyrics compiled by the patrician Rüdiger Manesse of Zurich and his son is considered to be the main source of the "Codex Manesse". Several addenda were incorporated up to around 1340. The manuscript represents the sum total of mediaeval lay songs and with regard to the "post-classical" minnesang it is the main and in some cases the only source.

Written in gothic letters by several hands the manuscript conveys to us the entire variety of genre and shapes of Middle High German lyrics beginning with secular song texts around 1150/60 up to its period of origin. There are no melody notations given. The text has been edited in several variorum editions and – in contrast to other manuscripts – printed with an exact transcription.

The manuscript is famous for its glorious colourful full-page miniatures. One miniature each is dedicated to 137 singers (one further miniature which cannot be assigned to a poet has remained as pen and ink drawing). The miniatures illustrate the poets in an idealised manner following courtly activities. The miniatures are considered to be an important document of Gothic illumination from the Upper Rhine region. They were made by four illustrators, 110 miniatures are attributed to the so called "Grundstock-Maler", 20 to the first "Nachtragsmaler", 4 to the second and 3 to the third "Nachtragsmaler" (+ one preparatory drawing). 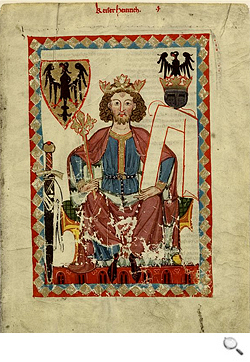 We only know little about the early ownership of the manuscript. At the end of the 16th century it was in the possession of the Swiss Calvinist Johann Philipp von Hohensax (1550-1596) who since 1567 has been temporarily active as a councillor and bailiff in the service of the Palatine Prince Elector. A few years after the assassination of von Hohensax the Prince Elector Frederick IV (1538-1610) claimed the codex. After long-drawn-out negotiations the codex was taken to Heidelberg in 1607. Whether the manuscript had been in the possession of the Prince Electors once before cannot be proofed.

The Prince Electors could enjoy the codex for only a short time. During the Thirty Years' War the manuscript was brought to safety in 1622, before the conquest of Heidelberg by the troops of the Catholic League led by Tilly. The family of the Prince took the manuscript with them when fleeing into exile.

So – in contrary to the famous Bibliotheca Palatina – the "Codex Manesse" escaped incorporation into the Biblioteca Apostolica Vaticana. After the death in exile of the Elector and so-called Winter King Frederick V in 1632, his widow, Elizabeth Stuart, was forced due to financial reason to auction the manuscript. The "Codex Manesse" turned up again in the library of Jacques Dupuy, curator of the Royal Library at Paris, who bequeathed it when he died in 1656. On 4th July the manuscript was officially passed on into the collection of the Royal Library where it stayed for the next 230 years.

The impact of the "Codex Manesse" for the record of German lyrics of the Middle Ages and the great interest in the manuscript shown by the special branch of science led to several efforts to restore the manuscript to Germany since the beginning of the 19th century. Neither the negotiations after Napoleon's defeat nor petitions or offers to exchange the manuscript, led to success. Expert opinions provided no indication for a German claim, too.

First in the year 1887 the bookseller Karl Ignaz Trübner (1846-1907) born in Heidelberg and based in Strasbourg arranged an elaborated exchange deal: the Bibliothèque Nationale at Paris received in return of delivering the "Codex Manesse" a payment of 150,000 Francs and 166 precious manuscripts – among those 23 Carolingian manuscripts produced in the scriptorium of Tours – which were stolen in Paris during the 1840s years by book thieves. Chancellor of the Reich Otto von Bismarck granted 400,000 German gold mark from the reserve fund to purchase the French manuscripts for the deal. On February 23rd Trübner handed over the French manuscripts to the French delegation in London. The German Emperor Frederick III. gae orders that the "Codex Manesse" had to be kept in the University Library of Heidelberg as the legitimate successor of the former Bibliotheca Palatina. Military police brought the manuscript from Paris to Heidelberg where it arrived on April 10th 1888.

Considering the threat of war and with utmost secrecy the "Codex Manesse" and the two charters of the University of Heidelberg were brought to the University Library of Erlangen on August 26th 1939. But in 1942 the Baden Ministry was afraid for the security of the precious cimelium. So in August 1942 the manuscript was carried to an air-raid shelter at Nürnberg to which the "Heidelberg Sachsenspiegel" (Cod. Pal. germ. 164) and the "Anthologia Palatina" (Cod. Pal. graec. 23) were transferred as well. After the war ended the manuscripts and charters were brought back to Heidelberg by US officers and on 11th April 1947 handed over to the University Library of Heidelberg.

The turbulent destiny of the "Codex Manesse" left traces on the manuscript. Many miniatures are damaged by colour abrasions on a smaller or larger scale and ink corrosion faded some areas of the text. For reasons of preservation the original codex is kept in an air-conditioned safe and is rarely exhibited. A first part-facsimile was still published in Paris in 1852.

On the occasion of the 500th anniversary (1886) of the University of Heidelberg a facsimile of all miniatures was released which was rapidly out of print. In 1925/27 the Insel Verlag (Leipzig) published a full-facsimile. A copy of this edition is kept for permanent display at the foyer on the first floor of the University Library.

In 1988 the University of Heidelberg organised a comprehensive exhibition about the "Codex Manesse". The catalogue to the exhibition shows the manuscript itself, its origin, history and importance.

As a contribution to the 625th anniversary of the University the University Library of Heidelberg presented its most precious treasure, the "Codex Manesse" in the original from 26th October 2010 to 20th February 2011.