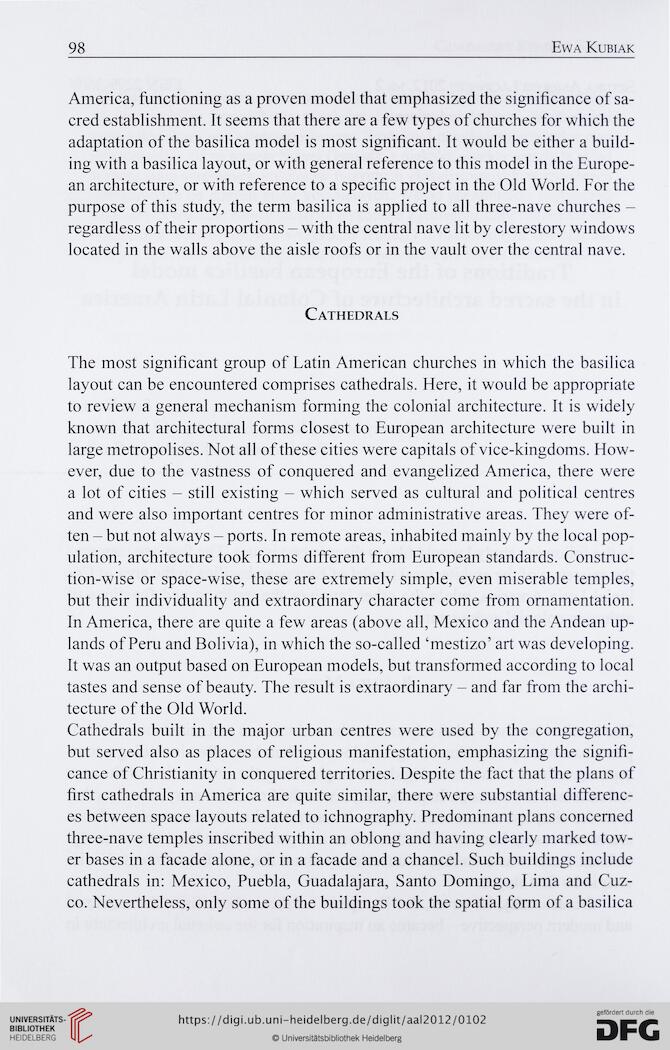 America, functioning as a proven model that emphasized the significance of sa-
cred establishment. It seems that there are a few types of churches for which the
adaptation of the basilica model is most significant. It would be either a build-
ing with a basilica layout, or with general reference to this model in the Europe-
an architecture, or with reference to a specific project in the Old World. For the
purpose of this study, the term basilica is applied to all three-nave churches -
regardless of their proportions - with the central nave lit by clerestory windows
located in the walls above the aisle roofs or in the vault over the central nave.
Cathedrals
The most significant group of Latin American churches in which the basilica
layout can be encountered comprises cathedrals. Here, it would be appropriate
to review a general mechanism forming the colonial architecture. It is widely
known that architectural forms closest to European architecture were built in
large metropolises. Not all of these cities were capitals of vice-kingdoms. How-
ever, due to the vastness of conquered and evangelized America, there were
a lot of cities - still existing - which served as cultural and political centres
and were also important centres for minor administrative areas. They were of-
ten - but not always - ports. In remote areas, inhabited mainly by the local pop-
ulation, architecture took forms different from European standards. Construc-
tion-wise or space-wise, these are extremely simple, even miserable temples,
but their individuality and extraordinary character come from ornamentation.
In America, there are quite a few areas (above all, Mexico and the Andean up-
lands of Peru and Bolivia), in which the so-called ‘mestizo’ art was developing.
It was an output based on European models, but transformed according to local
tastes and sense of beauty. The result is extraordinary - and far from the archi-
tecture of the Old World.
Cathedrals built in the major urban centres were used by the congregation,
but served also as places of religious manifestation, emphasizing the signifi-
cance of Christianity in conquered territories. Despite the fact that the plans of
first cathedrals in America are quite similar, there were substantial differenc-
es between space layouts related to ichnography. Predominant plans concerned
three-nave temples inscribed within an oblong and having clearly marked tow-
er bases in a facade alone, or in a facade and a chancel. Such buildings include
cathedrals in: Mexico, Puebla, Guadalajara, Santo Domingo, Lima and Cuz-
co. Nevertheless, only some of the buildings took the spatial form of a basilica