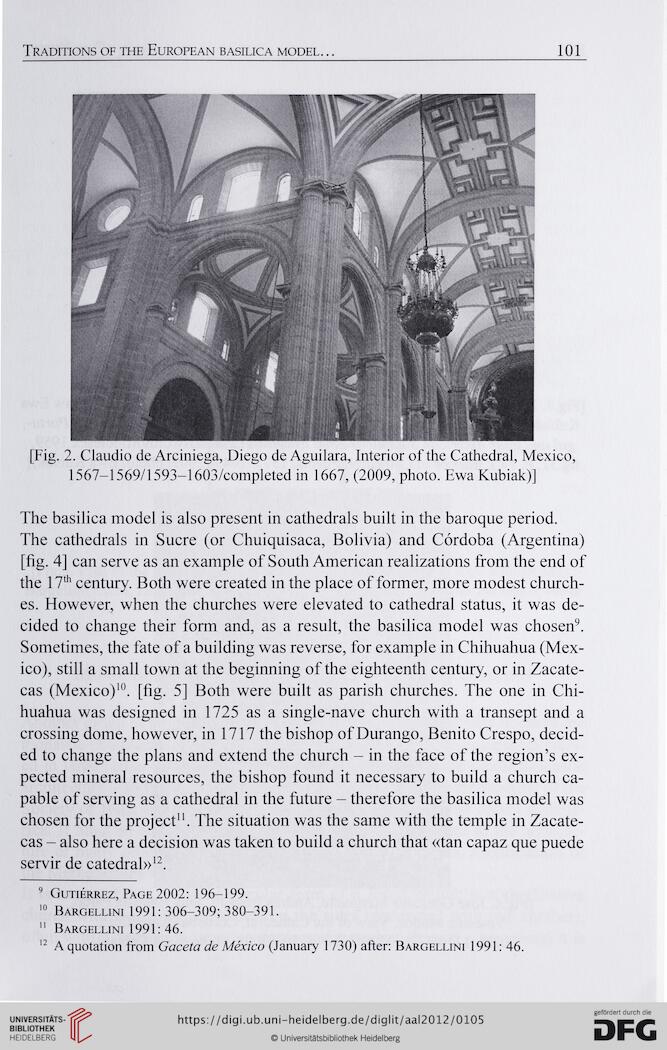 The basilica model is also present in cathedrals built in the baroque period.
The cathedrals in Sucre (or Chuiquisaca, Bolivia) and Córdoba (Argentina)
[fig. 4] can serve as an example of South American realizations from the end of
the 17th century. Both were created in the place of former, more modest church-
es. However, when the churches were elevated to cathedral status, it was de-
cided to change their form and, as a result, the basilica model was chosen9.
Sometimes, the fate of a building was reverse, for example in Chihuahua (Mex-
ico), still a small town at the beginning of the eighteenth century, or in Zacate-
cas (Mexico)10, [fig. 5] Both were built as parish churches. The one in Chi-
huahua was designed in 1725 as a single-nave church with a transept and a
crossing dome, however, in 1717 the bishop of Durango, Benito Crespo, decid-
ed to change the plans and extend the church - in the face of the region’s ex-
pected mineral resources, the bishop found it necessary to build a church ca-
pable of serving as a cathedral in the future - therefore the basilica model was
chosen for the project11. The situation was the same with the temple in Zacate-
cas - also here a decision was taken to build a church that «tan capaz que puede
servir de catedral»12.
9 Gutiérrez, Page 2002: 196-199.
10 Bargellini 1991: 306-309; 380-391.
11 Bargellini 1991: 46.
12 A quotation from Gaceta de México (January 1730) after: Bargellini 1991: 46.