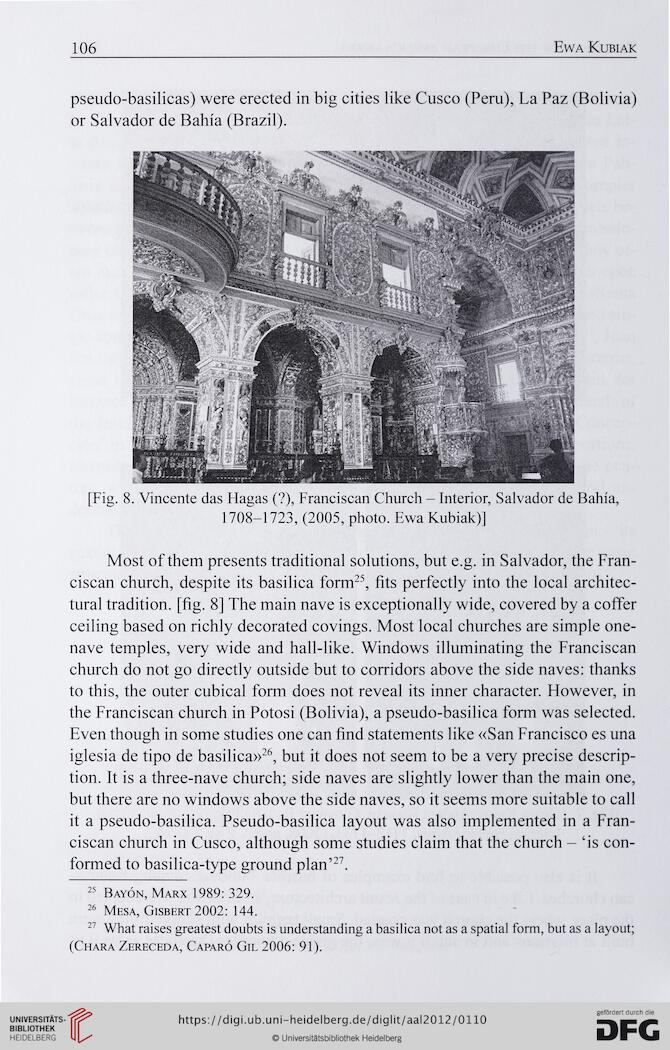 Most of them presents traditional solutions, but e.g. in Salvador, the Fran-
ciscan church, despite its basilica form25, fits perfectly into the local architec-
tural tradition, [fig. 8] The main nave is exceptionally wide, covered by a coffer
ceiling based on richly decorated covings. Most local churches are simple one-
nave temples, very wide and hall-like. Windows illuminating the Franciscan
church do not go directly outside but to corridors above the side naves: thanks
to this, the outer cubical form does not reveal its inner character. However, in
the Franciscan church in Potosi (Bolivia), a pseudo-basilica form was selected.
Even though in some studies one can find statements like «San Francisco es una
iglesia de tipo de basilica»26, but it does not seem to be a very precise descrip-
tion. It is a three-nave church; side naves are slightly lower than the main one,
but there are no windows above the side naves, so it seems more suitable to call
it a pseudo-basilica. Pseudo-basilica layout was also implemented in a Fran-
ciscan church in Cusco, although some studies claim that the church - ‘is con-
formed to basilica-type ground plan’27.
25 Bayón, Marx 1989: 329.
26 Mesa, Gisbert 2002: 144.
27 What raises greatest doubts is understanding a basilica not as a spatial form, but as a layout;
(Chara Zereceda, Caparó Gil 2006: 91).