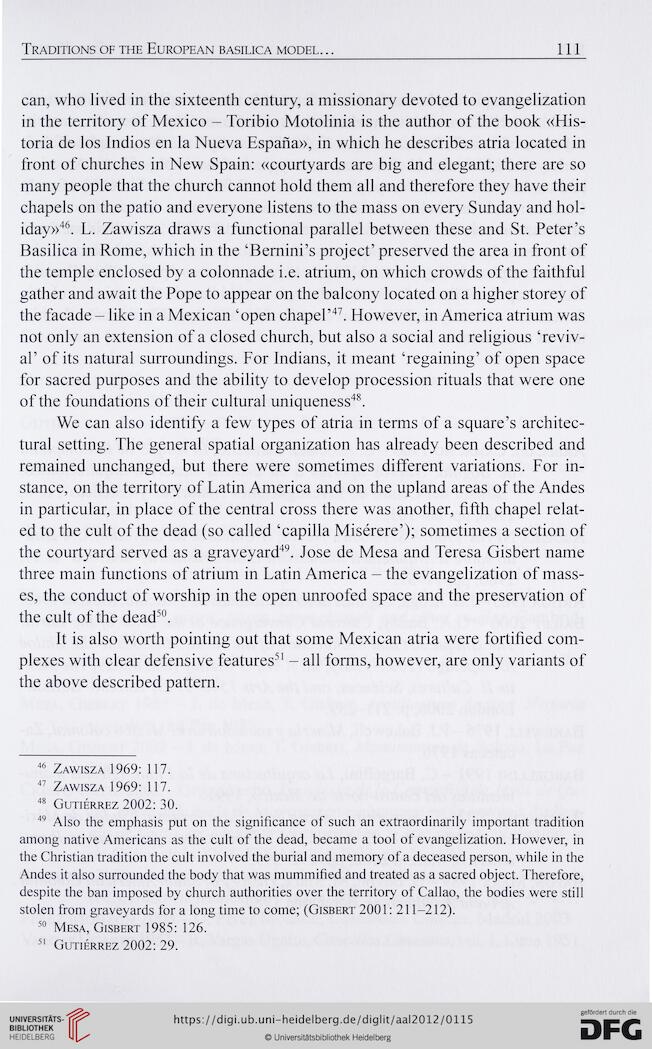 can, who lived in the sixteenth century, a missionary devoted to evangelization
in the territory of Mexico - Toribio Motolinia is the author of the book «His-
toria de los Indios en la Nueva España», in which he describes atria located in
front of churches in New Spain: «courtyards are big and elegant; there are so
many people that the church cannot hold them all and therefore they have their
chapels on the patio and everyone listens to the mass on every Sunday and hol-
iday»46. L. Zawisza draws a functional parallel between these and St. Peter’s
Basilica in Rome, which in the ‘Bernini’s project’ preserved the area in front of
the temple enclosed by a colonnade i.e. atrium, on which crowds of the faithful
gather and await the Pope to appear on the balcony located on a higher storey of
the facade - like in a Mexican ‘open chapel’47. However, in America atrium was
not only an extension of a closed church, but also a social and religious ‘reviv-
al’ of its natural surroundings. For Indians, it meant ‘regaining’ of open space
for sacred purposes and the ability to develop procession rituals that were one
of the foundations of their cultural uniqueness48.
We can also identify a few types of atria in terms of a square’s architec-
tural setting. The general spatial organization has already been described and
remained unchanged, but there were sometimes different variations. For in-
stance, on the territory of Latin America and on the upland areas of the Andes
in particular, in place of the central cross there was another, fifth chapel relat-
ed to the cult of the dead (so called ‘capilla Miserere’); sometimes a section of
the courtyard served as a graveyard49. Jose de Mesa and Teresa Gisbert name
three main functions of atrium in Latin America - the evangelization of mass-
es, the conduct of worship in the open unroofed space and the preservation of
the cult of the dead50.
It is also worth pointing out that some Mexican atria were fortified com-
plexes with clear defensive features51 - all forms, however, are only variants of
the above described pattern.

46 Zawisza 1969: 117.
47 Zawisza 1969: 117.
48 Gutiérrez 2002: 30.
49 Also the emphasis put on the significance of such an extraordinarily important tradition
among native Americans as the cult of the dead, became a tool of evangelization. However, in
the Christian tradition the cult involved the burial and memory of a deceased person, while in the
Andes it also surrounded the body that was mummified and treated as a sacred object. Therefore,
despite the ban imposed by church authorities over the territory of Callao, the bodies were still
stolen from graveyards for a long time to come; (Gisbert 2001: 211-212).
50 Mesa, Gisbert 1985: 126.
51 Gutiérrez 2002: 29.