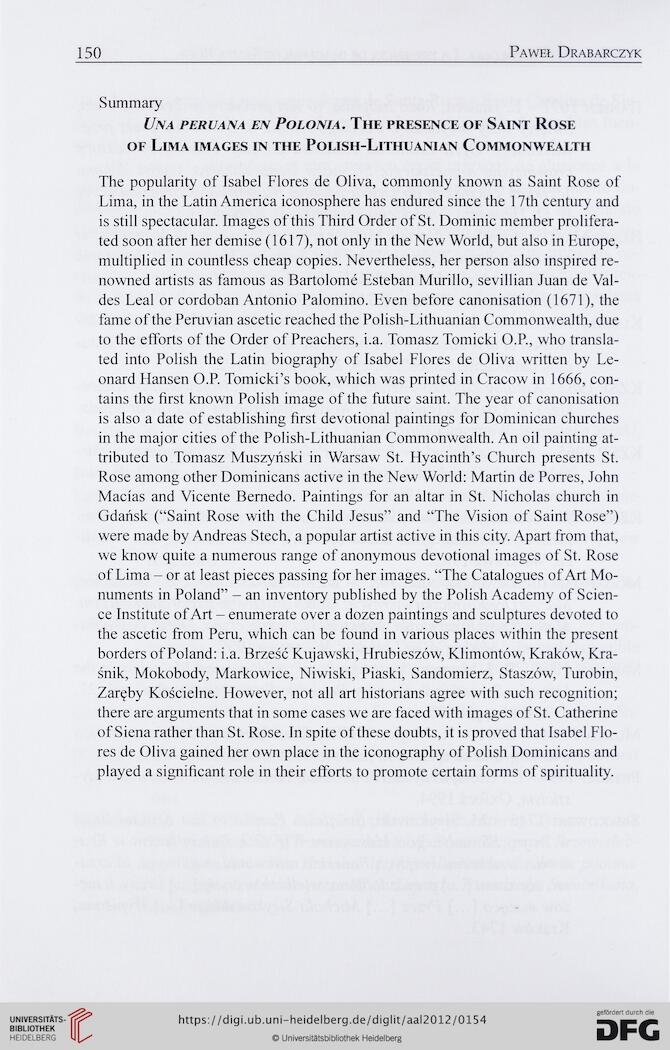 Summary
Una peruana en Polonia. The presence of Saint Rose
of Lima images in the Polish-Lithuanian Commonwealth
The popularity of Isabel Flores de Oliva, commonly known as Saint Rose of
Lima, in the Latin America iconosphere has endured since the 17th century and
is still spectacular. Images of this Third Order of St. Dominic member prolifera-
ted soon after her demise (1617), not only in the New World, but also in Europe,
multiplied in countless cheap copies. Nevertheless, her person also inspired re-
nowned artists as famous as Bartolomé Esteban Murillo, sevillian Juan de Val-
des Leal or cordobán Antonio Palomino. Even before canonisation (1671), the
fame of the Peruvian ascetic reached the Polish-Lithuanian Commonwealth, due
to the efforts of the Order of Preachers, i.a. Tomasz Tomicki O.P., who transla-
ted into Polish the Latin biography of Isabel Flores de Oliva written by Le-
onard Hansen O.P. Tomicki’s book, which was printed in Cracow in 1666, con-
tains the first known Polish image of the future saint. The year of canonisation
is also a date of establishing first devotional paintings for Dominican churches
in the major cities of the Polish-Lithuanian Commonwealth. An oil painting at-
tributed to Tomasz Muszyński in Warsaw St. Hyacinth’s Church presents St.
Rose among other Dominicans active in the New World: Martin de Porres, John
Macias and Vicente Bemedo. Paintings for an altar in St. Nicholas church in
Gdańsk (“Saint Rose with the Child Jesus” and “The Vision of Saint Rose”)
were made by Andreas Stech, a popular artist active in this city. Apart from that,
we know quite a numerous range of anonymous devotional images of St. Rose
of Lima - or at least pieces passing for her images. “The Catalogues of Art Mo-
numents in Poland” - an inventory published by the Polish Academy of Scien-
ce Institute of Art - enumerate over a dozen paintings and sculptures devoted to
the ascetic from Peru, which can be found in various places within the present
borders of Poland: i.a. Brześć Kujawski, Hrubieszów, Klimontów, Kraków, Kra-
śnik, Mokobody, Markowice, Niwiski, Piaski, Sandomierz, Staszów, Turobin,
Zaręby Kościelne. However, not all art historians agree with such recognition;
there are arguments that in some cases we are faced with images of St. Catherine
of Siena rather than St. Rose. In spite of these doubts, it is proved that Isabel Flo-
res de Oliva gained her own place in the iconography of Polish Dominicans and
played a significant role in their efforts to promote certain forms of spirituality.