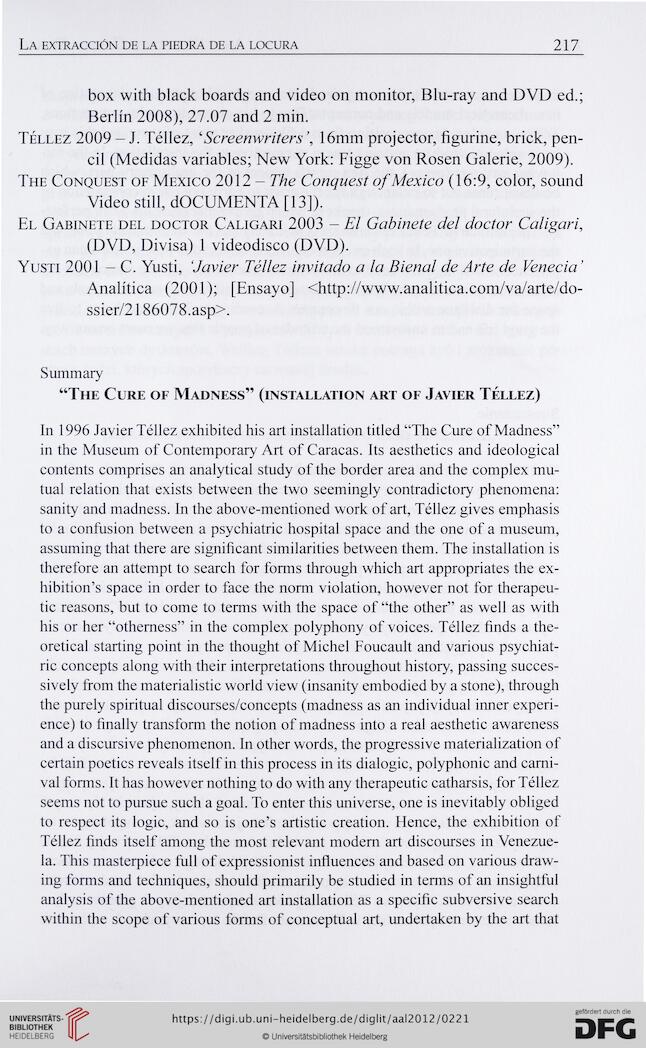 box with black boards and video on monitor, Blu-ray and DVD ed.;
Berlin 2008), 27.07 and 2 min.
Tellez 2009 - J. Tellez, 'Screenwriters 16mm projector, figurine, brick, pen-
cil (Medidas variables; New York: Figge von Rosen Galerie, 2009).
The Conquest of Mexico 2012 - The Conquest of Mexico (16:9, color, sound
Video still, dOCUMENTA [13]).
El Gabinete del doctor Caligari 2003 - El Gabinete del doctor Coligar i,
(DVD, Divisa) 1 videodisco (DVD).
Yusti 2001 - C. Yusti, ‘Javier Téllez invitado a la Bienal de Arte de Venecia’
Analítica (2001); [Ensayo] <http://www.analitica.com/va/arte/do-
ssier/2186078.asp>.
Summary
“The Cure of Madness” (installation art of Javier Téllez)
In 1996 Javier Téllez exhibited his art installation titled “The Cure of Madness”
in the Museum of Contemporary Art of Caracas. Its aesthetics and ideological
contents comprises an analytical study of the border area and the complex mu-
tual relation that exists between the two seemingly contradictory phenomena:
sanity and madness. In the above-mentioned work of art, Téllez gives emphasis
to a confusion between a psychiatric hospital space and the one of a museum,
assuming that there are significant similarities between them. The installation is
therefore an attempt to search for forms through which art appropriates the ex-
hibition’s space in order to face the norm violation, however not for therapeu-
tic reasons, but to come to terms with the space of “the other” as well as with
his or her “otherness” in the complex polyphony of voices. Téllez finds a the-
oretical starting point in the thought of Michel Foucault and various psychiat-
ric concepts along with their interpretations throughout history, passing succes-
sively from the materialistic world view (insanity embodied by a stone), through
the purely spiritual discourses/concepts (madness as an individual inner experi-
ence) to finally transform the notion of madness into a real aesthetic awareness
and a discursive phenomenon. In other words, the progressive materialization of
certain poetics reveals itself in this process in its dialogic, polyphonic and carni-
val forms. It has however nothing to do with any therapeutic catharsis, for Téllez
seems not to pursue such a goal. To enter this universe, one is inevitably obliged
to respect its logic, and so is one’s artistic creation. Hence, the exhibition of
Téllez finds itself among the most relevant modem art discourses in Venezue-
la. This masterpiece full of expressionist influences and based on various draw-
ing forms and techniques, should primarily be studied in terms of an insightful
analysis of the above-mentioned art installation as a specific subversive search
within the scope of various forms of conceptual art, undertaken by the art that