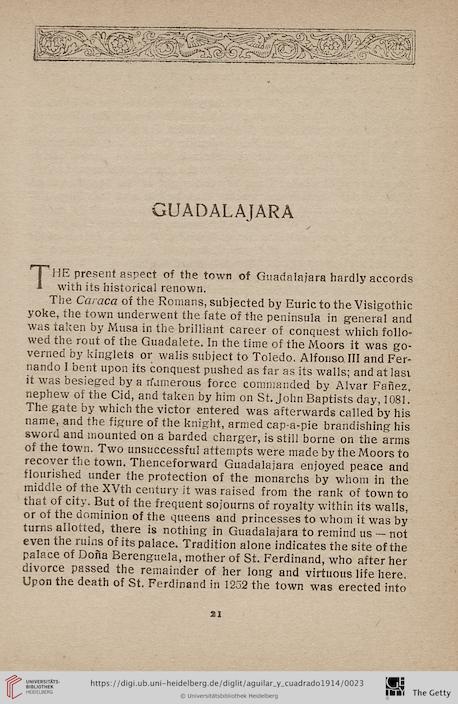 THE present aspect of the town of Guadalajara hardly accords
with its historical renown.
The Caraca of the Romans, subjected by Euric to the Visigothic
yoke, the town underwent the fate of the peninsula in general and
was taken by Musa in the brilliant career of conquest which follo-
wed the rout of the Guadalete. In the time of the Moors it was go-
verned by kinglets or walis subject to Toledo. Alfonso III and Fer-
nando I bent upon its conquest pushed as far as its walls; and at Iasi
it was besieged by a rfumerous force commanded by Alvar Fafiez,
nephew of the Cid, and taken by him on St.John Baptists day, 1081.
The gate by which the victor entered was afterwards called by his
name, and the figure of the knight, armed cap-a-pie brandishing his
sword and mounted on a barded charger, is still borne on the arms
of the town. Two unsuccessful attempts were made by the Moors to
recover the town. Thenceforward Guadalajara enjoyed peace and
flourished under the protection of the monarchs by whom in the
middle of the XVth century it was raised from the rank of town to
that of city. But of the frequent sojourns of royalty within its walls,
or of the dominion of the queens and princesses to whom it was by
turns allotted, there is nothing in Guadalajara to remind us — not
even the ruins of its palace. Tradition alone indicates the site of the
palace of Doña Berenguela, mother of St. Ferdinand, who after her
divorce passed the remainder of her long and virtuous life here.
Upon the death of St. Ferdinand in 1252 the town was erected into