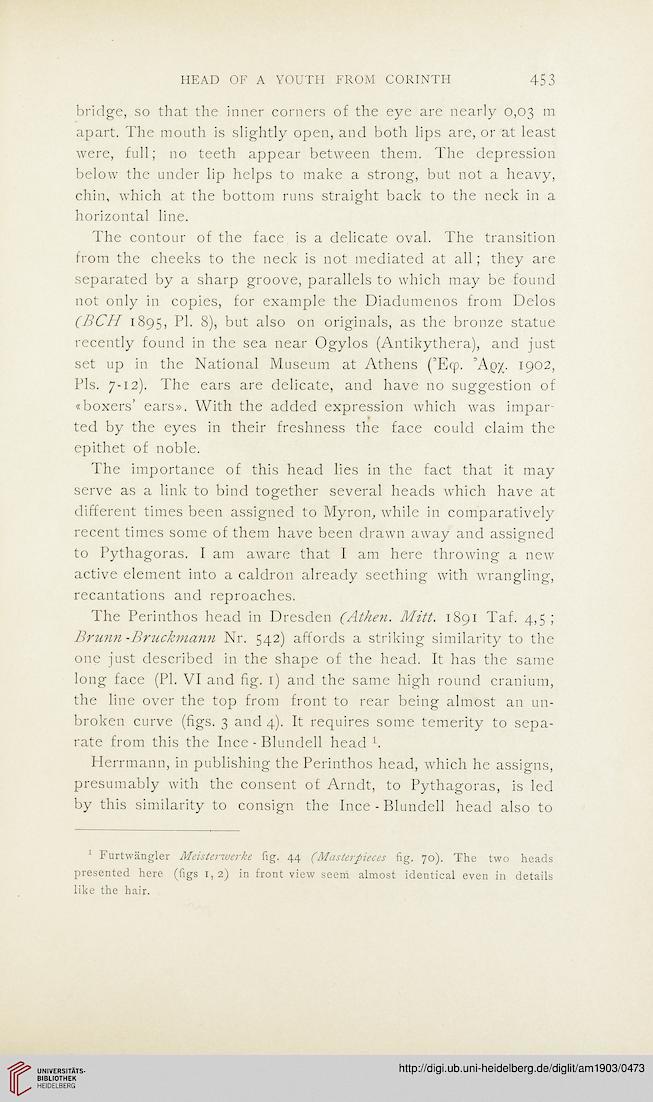 bridge, so that the inner corners of the eye are nearly 0,03 m
apart. The mouth is slightly open, and both lips are, or at least
were, full; 110 teeth appear between them. The depression
below the under lip helps to make a strong, but not a heavy,
chin, which at the bottom runs straight back to the neck in a
horizontal line.
The contour of the face is a delicate oval. The transition
frotn the cheeks to the neck is not mediated at all; they are
separatecl by a sharp groove, parallels to which may be found
not only in copies, for example the Diadumenos from Delos
(BCH 1895, PI. 8), but also on Originals, as the bronze statue
recently found in the sea near Ogylos (Antikythera), and just
set up in the National Museum at Athens (Έορ. Άρχ. 1902,
Pis. 7-12). The ears are delicate, and have no Suggestion of
«boxers’ ears». VVith the aclded expression which was impar-
tecl by the eyes in their freshness the face coulcl claim the
epithet of noble.
The importance of this head lies in the fact that it may
serve as a link to bind together several heads wrhich have at
different times been assigned to Myron, while in comparatively
recent times some of them have been drawn away and assigned
to Pythagoras. I am aware that I am here throwing a new
active element into a caldron already seething with wrangling,
recantations and reproaches.
The Perinthos head in Dresden (Athen. Mitt. 1891 Taf. 4,5 ;
Brunn-Bruckmann Nr. 542) affords a striking similarity to the
one just clescribed in the shape of the head. It has the same
long face (PI. VI and füg. 1) and the same high round cranium,
the line over the top from front to rear being almost an un-
broken curve (figs. 3 and 4). It requires some temerity to sepa-
rate from this the Ince - Blundell head 1.
Herrmann, in Publishing the Perinthos head, which he assigns,
presumably with the consent of Arndt, to Pythagoras, is led
by this similarity to consign the Ince - Blundell head also to