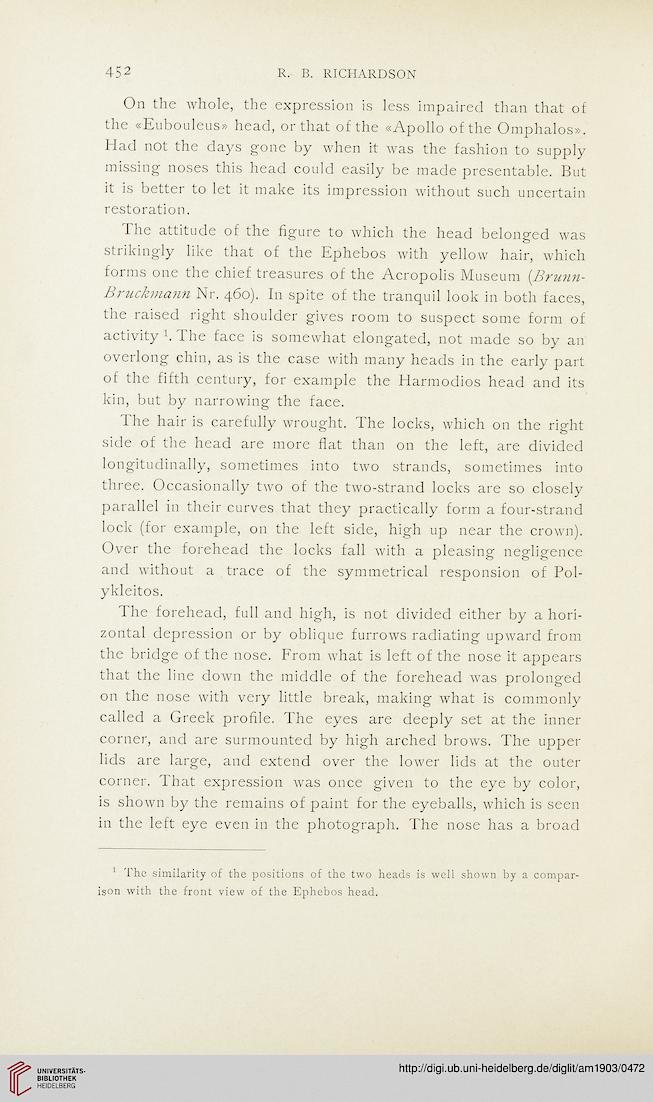 On the whole, the expression is less impaired than that of
the «Eubouleus» head, orthat of the «Apollo ofthe Omphalos».
Had not the days gone by when it was the fashion to supply
missing noses this head could easily be made presentable. But
it is better to let it make its impression without such uncertain
restoration.
The attitude of the figure to which the head belonged was
strikingly like that of the Ephebos with yellow hair, which
forms one the chief treasures of the Acropolis Museum (.Brunn-
Bruckmann Nr. 460). In spite of the tranquil look in both faces,
the raised right shoulder gives room to suspect some form of
activity h The face is somewhat elongated, not made so by an
overlong chin, as is the case with many heads in the early part
of the fifth Century, for example the Harmodios head and its
kin, but by narrowing the face.
The hair is carefully wrought. The locks, \vhich on the right
siele of the head are more flat than on the left, are divicled
longitudinally, sometimes into two Strands, sometimes into
three. Occasionally two of the two-strand locks are so closely
parallel in their curves that they practically form a four-strand
lock (for example, on the left siele, high up near the crown).
Over the forehead the locks fall with a pleasing negligence
and without a trace of the symmetrical responsion of Pol-
ykleitos.
The forehead, full and high, is not divicled either by a hori-
zontal depression or by oblique furrows racliating upward from
the briclge of the nose. From what is left of the nose it appears
that the line down the middle of the forehead was prolonged
on the nose with very little break, making what is commonly
called a Greek profile. The eyes are eleeply set at the inner
corner, and are surmounted by high arched brows. The upper
lids are large, and extend over the lower lids at the outer
corner. That expression was once given to the eye by color,
is shown by the remains of paint for the eyeballs, which is seen
in the left eye even in the photograph. The nose has a broad

1 The similarity of the positions of the two heads is well shown by a compar-
ison with the front view of the Ephebos head.