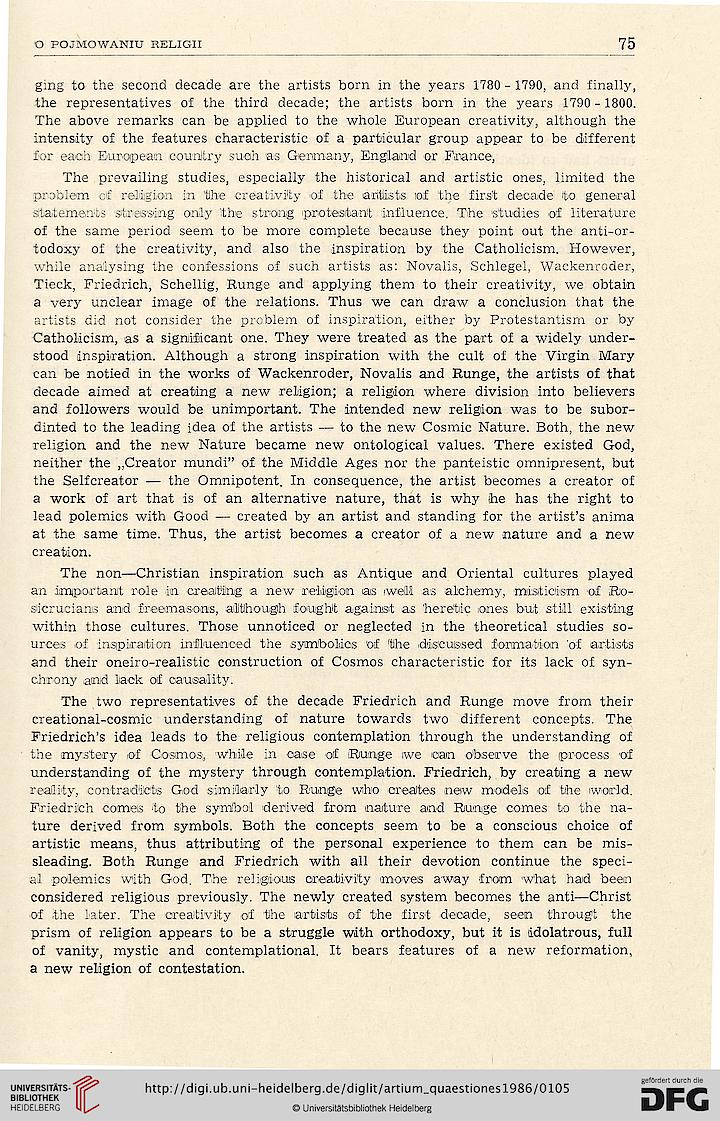 ging to the second decade are the artists born in the years 1780 - 1790, and finally,
the representatives of the third decade; the artists born in the years 1790 - 1800.
The above remarks can be applied to the whole European creativity, although the
intensity of the features characteristic of a particular group appear to be different
for each European country such as Germany, England or France-,
The prevailing studies, especially the historical and artistic ones, limited the
problem of religion in thie creativity of the aritiists of the first decade to general
statements stressing only the strong protestant influence. The studies of literature
of the same period seem to be more complete because they point out the anti-or-
todoxy of the creativity, and also the inspiration by the Catholicism. However,
while analysing the confessions of such artists as: Novalis, Schlegel, Wackenroder,
Tieck, Friedrich, Schellig, Runge and applying them to their creativity, we obtain
a very unclear image of the relations. Thus we can draw a conclusion that the
artists did not consider the problem of inspiration, either by Protestantism or by
Catholicism, as a significant one. They were treated as the part of a widely under-
stood inspiration. Although a strong inspiration with the cult of the Virgin Mary
can be notied in the works of Wackenroder, Novalis and Runge, the artists of that
decade aimed at creating a new religion; a religion where division into believers
and followers would be unimportant. The intended new religion was to be subor-
dinted to the leading idea of the artists — to the new Cosmic Nature. Both, the new
religion and the new Nature became new ontological values. There existed God,
neither the ,.Creator mundi” of the Middle Ages nor the panteistic omnipresent, but
the Selfcreator — the Omnipotent. In consequence, the artist becomes a creator of
a work of art that is of an alternative nature, that is why the has the right to
lead polemics with Good — created by an artist and standing for the artist’s anima
at the same time. Thus, the artist becomes a creator of a new nature and a new
creation.
The non—Christian inspiration such as Antique and Oriental cultures played
an important role in -creating a new religion ais iwell as alchemy, -mdsitieism of Ro-
sierueianis and freemasons, although fought against as ‘heretic lon-eis but still existing
within those cultures. Those unnoticed or neglected in the theoretical studies so-
urces of inspiration influenced the symbolics of the discussed formation of artists
and their oneiro-realistic construction of Cosmos characteristic for its lack of syn-
chrony and lack of causality.
The two representatives of the decade Friedrich and Runge move from their
creational-cosmic understanding of nature towards two different concepts. The
Friedrich’s idea leads to the religious contemplation through the understanding of
the mystery of Cosmos-, -while in -case of Runge iwe can observe the process -of
understanding of the mystery through contemplation. Friedrich, by creating a new
reality, -contradicts Cod -similarly to Runge who -creates new models -of the world.
Friedrich -comeis to the symbo-l derived from nature and Runge c-o-mes to the na-
ture derived from symbols. Both the concepts seem to be a conscious choice of
artistic means, thus attributing of the personal experience to them can be mi-
sleading. Both Runge and Friedrich with all their devotion continue the speci-
al polemics with Cod. The religious creativity mo-veis away -from -What had been
considered religious previously. The newly created system becomes the anti—Christ
-of the later. The -creativity -of ‘the artists of the first decade, seen througt the
prism of religion appears to be a struggle with orthodoxy, but it is idolatrous, full
of vanity, mystic and contemplational. It bears features of a new reformation,
a new religion of contestation.