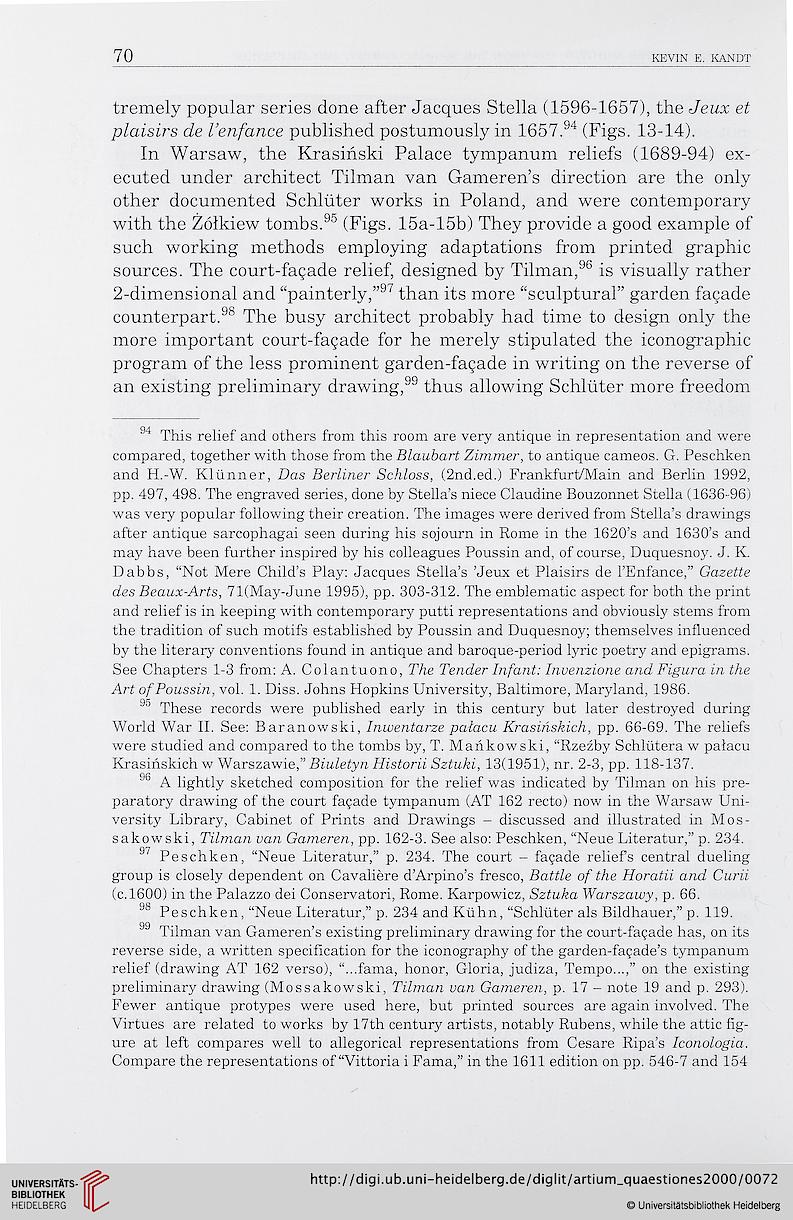 In Warsaw, the Krasinski Palace tympanum reliefs (1689-94) ex-
ecuted under architect Tilman van Gameren’s direction are the only
other documented Schlüter works in Poland, and were contemporary
with the Zôlkiew tombs.95 (Figs. 15a-15b) They provide a good example of
such working methods employing adaptations from printed graphie
sources. The court-façade relief, designed by Tilman,96 is visually rather
2-dimensional and “painterly,”97 than its more “sculptural” garden façade
counterpart.98 The busy architect probably had time to design only the
more important court-façade for he merely stipulated the iconographie
program of the less prominent garden-façade in writing on the reverse of
an existing preliminary drawing," thus allowing Schlüter more freedom

94 This relief and others from this room are very antique in représentation and were
compared, together with those from the Blaubart Zimmer, to antique cameos. G. Peschken
and H.-W. Klünner, Das Berliner Schloss, (2nd.ed.) Frankfurt/Main and Berlin 1992,
pp. 497, 498. The engraved sériés, done by Stella’s niece Claudine Bouzonnet Stella (1636-96)
was very popular following their création. The images were derived from Stella’s drawings
after antique sarcophagai seen during his sojourn in Rome in the 1620’s and 1630’s and
may hâve been further inspired by his colleagues Poussin and, of course, Duquesnoy. J. K.
Dabbs, “Not Mere Child’s Play: Jacques Stella’s ’Jeux et Plaisirs de l’Enfance,” Gazette
des Beaux-Arts, 71(May-June 1995), pp. 303-312. The emblematic aspect for both the print
and relief is in keeping with contemporary putti représentations and obviously stems from
the tradition of such motifs established by Poussin and Duquesnoy; themselves influenced
by the literary conventions found in antique and baroque-period lyric poetry and epigrams.
See Chapters 1-3 from: A. Colantuono, The Tender Infant: Inuenzione and Figura in the
Art of Poussin, vol. 1. Diss. Johns Hopkins University, Baltimore, Maryland, 1986.

96 A lightly sketched composition for the relief was indicated by Tilman on his pre-
paratory drawing of the court façade tympanum (AT 162 recto) now in the Warsaw Uni-
versity Library, Cabinet of Prints and Drawings - discussed and illustrated in Mos-
sakowski, Tilman van Gameren, pp. 162-3. See also: Peschken, “Neue Literatur,” p. 234.

99 Tilman van Gameren’s existing preliminary drawing for the court-façade has, on its
reverse side, a written spécification for the iconography of the garden-façade’s tympanum
relief (drawing AT 162 verso), “...fama, honor, Gloria, judiza, Tempo...,” on the existing
preliminary drawing (Mossakowski, Tilman van Gameren, p. 17 - note 19 and p. 293).
Fewer antique protypes were used here, but printed sources are again involved. The
Virtues are related to works by 17th century artists, notably Rubens, while the attic fig-
ure at left compares well to allegorical représentations from Cesare Ripa’s Iconologia.
Compare the représentations of “Vittoria i Fama,” in the 1611 édition on pp. 546-7 and 154