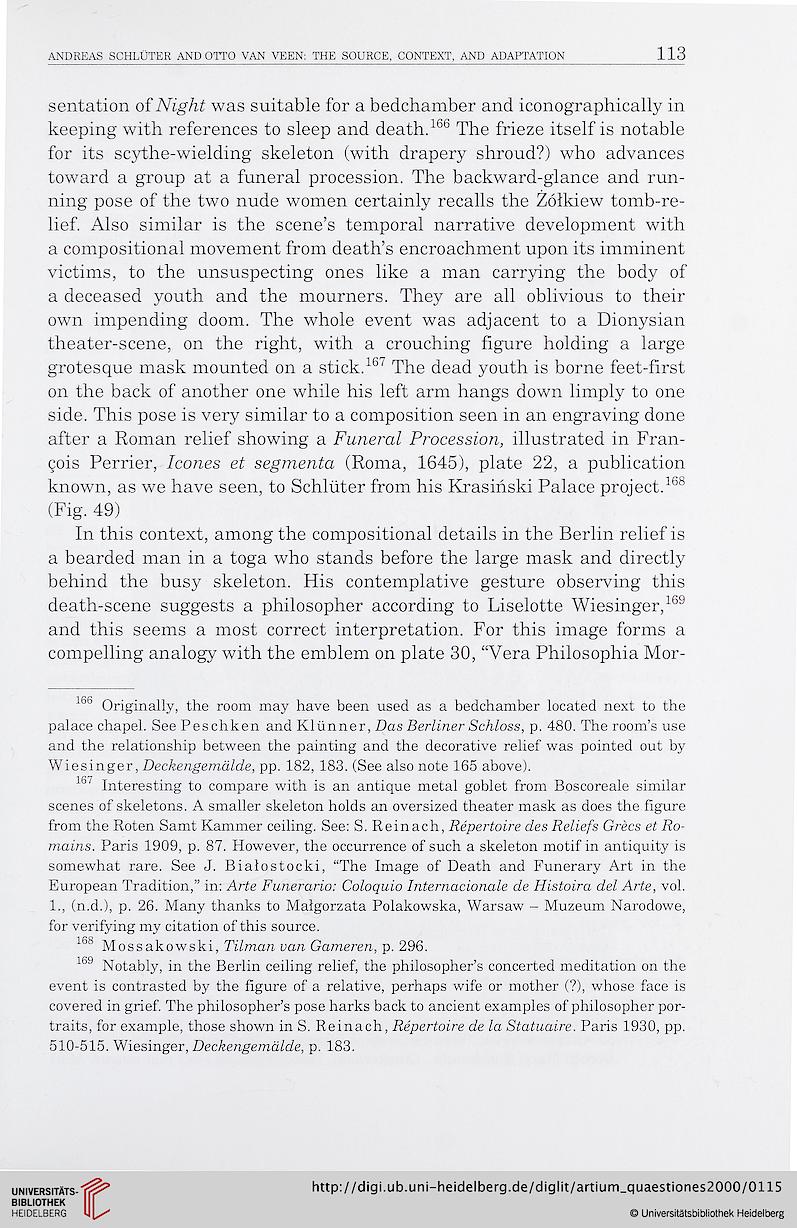 sentation of Night was suitable for a bedchamber and iconographically in
keeping with references to sleep and death.166 The frieze itself is notable
for its scythe-wielding skeleton (with drapery shroud?) who advances
toward a group at a funeral procession. The backward-glance and run-
ning pose of the two nude women certainly recalls the Zôlkiew tomb-re-
lief. Also similar is the scene’s temporal narrative development with
a compositional movement from death’s encroachment upon its imminent
victims, to the unsuspecting ones like a man carrying the body of
a deceased youth and the mourners. They are ail oblivious to their
own impending doom. The whole event was adjacent to a Dionysian
theater-scene, on the right, with a crouching figure holding a large
grotesque mask mounted on a stick.167 The dead youth is borne feet-first
on the back of another one while his left arm hangs down limply to one
side. This pose is very similar to a composition seen in an engraving done
after a Roman relief showing a Funeral Procession, illustrated in Fran-
çois Perrier, Icônes et segmenta (Roma, 1645), plate 22, a publication
known, as we hâve seen, to Schlüter from his Krasinski Palace proiect.168
(Fig. 49)

In this context, among the compositional details in the Berlin relief is
a bearded man in a toga who stands before the large mask and directly
behind the busy skeleton. His contemplative gesture observing this
death-scene suggests a philosopher according to Liselotte Wiesinger,169
and this seems a most correct interprétation. For this image forms a
compelling analogy with the emblem on plate 30, “Vera Philosophia Mor-

166 Originally, the room may hâve been used as a bedchamber located next to the
palace chapel. See Peschken and Klünner, Das Berliner Schloss, p. 480. The room’s use
and the relationship between the painting and the décorative relief was pointed out by
Wiesinger, Deckengemalde, pp. 182, 183. (See also note 165 above).

16 / Interesting to compare with is an antique métal goblet from Boscoreale similar
scenes of skeletons. A smaller skeleton holds an oversized theater mask as does the figure
from the Roten Samt Kammer ceiling. See: S. Reinach, Répertoire des Reliefs Grecs et Ro-
mains. Paris 1909, p. 87. However, the occurrence of such a skeleton motif in antiquity is
somewhat rare. See J. Bialostocki, “The Image of Death and Funerary Art in the
European Tradition,” in: Arte Funerario: Coloquio Internacionale de Histoira del Arte, vol.
1., (n.d.), p. 26. Many thanks to Malgorzata Polakowska, Warsaw - Muzeum Narodowe,
for verifying my citation of this source.

169 Notably, in the Berlin ceiling relief, the philosopher’s concerted méditation on the
event is contrasted by the figure of a relative, perhaps wife or mother (?), whose face is
covered in grief. The philosopher’s pose harks back to ancient examples of philosopher por-
traits, for example, those shown in S. Reinach, Répertoire de la Statuaire. Paris 1930, pp.
510-515. Wiesinger, Deckengemalde, p. 183.