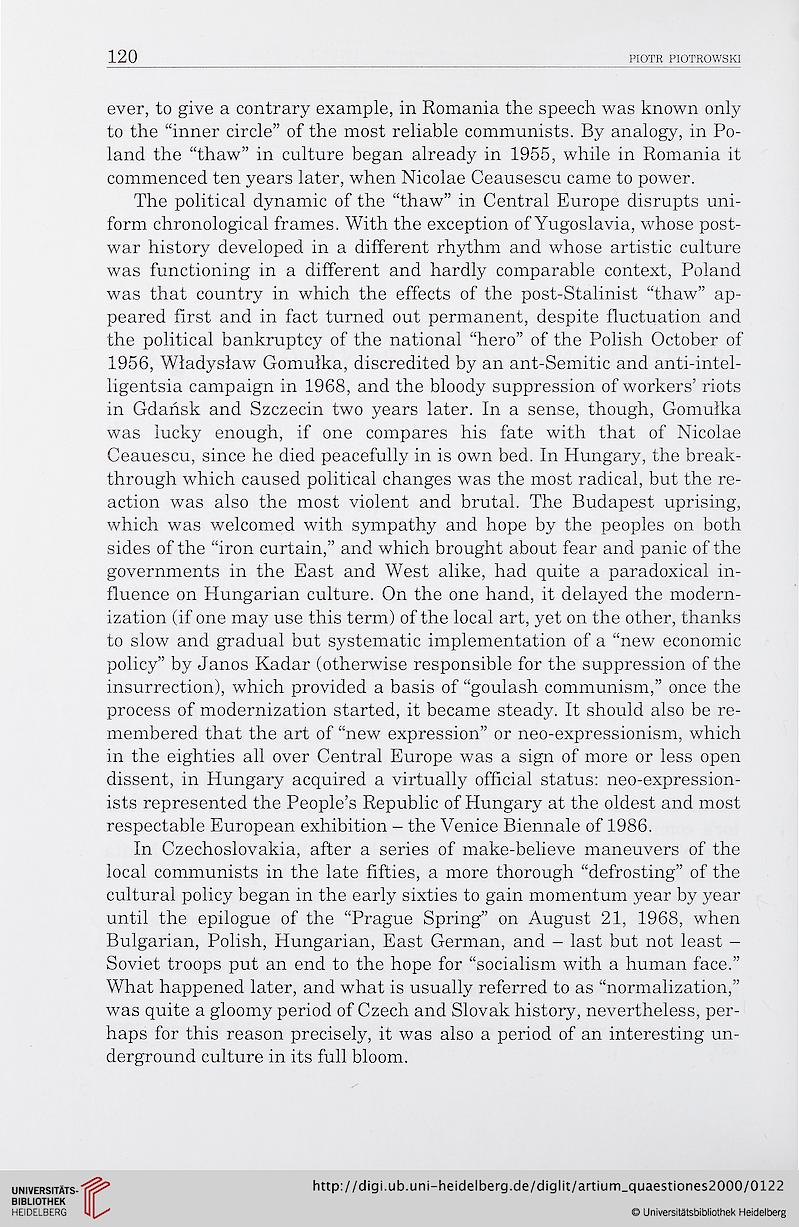 ever, to give a contrary example, in Romania the speech was known only
to the “inner circle” of the most reliable communists. By analogy, in Po-
land the “thaw” in culture began already in 1955, while in Romania it
commenced ten years later, when Nicolae Ceausescu came to power.

The political dynamic of the “thaw” in Central Europe disrupts uni-
form chronological frames. With the exception of Yugoslavia, whose post-
war history developed in a different rhythm and whose artistic culture
was functioning in a different and hardly comparable context, Poland
was that country in which the effects of the post-Stalinist “thaw” ap-
peared fïrst and in fact turned out permanent, despite fluctuation and
the political bankruptcy of the national “hero” of the Polish October of
1956, Wiadysiaw Gomuika, discredited by an ant-Semitic and anti-intel-
ligentsia campaign in 1968, and the bloody suppression of workers’ riots
in Gdansk and Szczecin two years later. In a sense, though, Gomuika
was lucky enough, if one compares his fate with that of Nicolae
Ceauescu, since he died peacefully in is own bed. In Hungary, the break-
through which caused political changes was the most radical, but the re-
action was also the most violent and brutal. The Budapest uprising,
which was welcomed with sympathy and hope by the peoples on both
sides of the “iron curtain,” and which brought about fear and panic of the
governments in the East and West alike, had quite a paradoxical in-
fluence on Hungarian culture. On the one hand, it delayed the modern-
ization (if one may use this term) of the local art, yet on the other, thanks
to slow and graduai but systematic implémentation of a “new économie
policy” by Janos Kadar (otherwise responsible for the suppression of the
insurrection), which provided a basis of “goulash communism,” once the
process of modernization started, it became steady. It should also be re-
membered that the art of “new expression” or neo-expressionism, which
in the eighties ail over Central Europe was a sign of more or less open
dissent, in Hungary acquired a virtually official status: neo-expression-
ists represented the People’s Republic of Hungary at the oldest and most
respectable European exhibition - the Venice Biennale of 1986.

In Czechoslovakia, after a sériés of make-believe maneuvers of the
local communists in the late fifties, a more thorough “defrosting” of the
cultural policy began in the early sixties to gain momentum year by year
until the épilogue of the “Prague Spring” on August 21, 1968, when
Bulgarian, Polish, Hungarian, East German, and - last but not least -
Soviet troops put an end to the hope for “socialism with a human face.”
What happened later, and what is usually referred to as “normalization,”
was quite a gloomy period of Czech and Slovak history, nevertheless, per-
haps for this reason precisely, it was also a period of an interesting un-
derground culture in its full bloom.