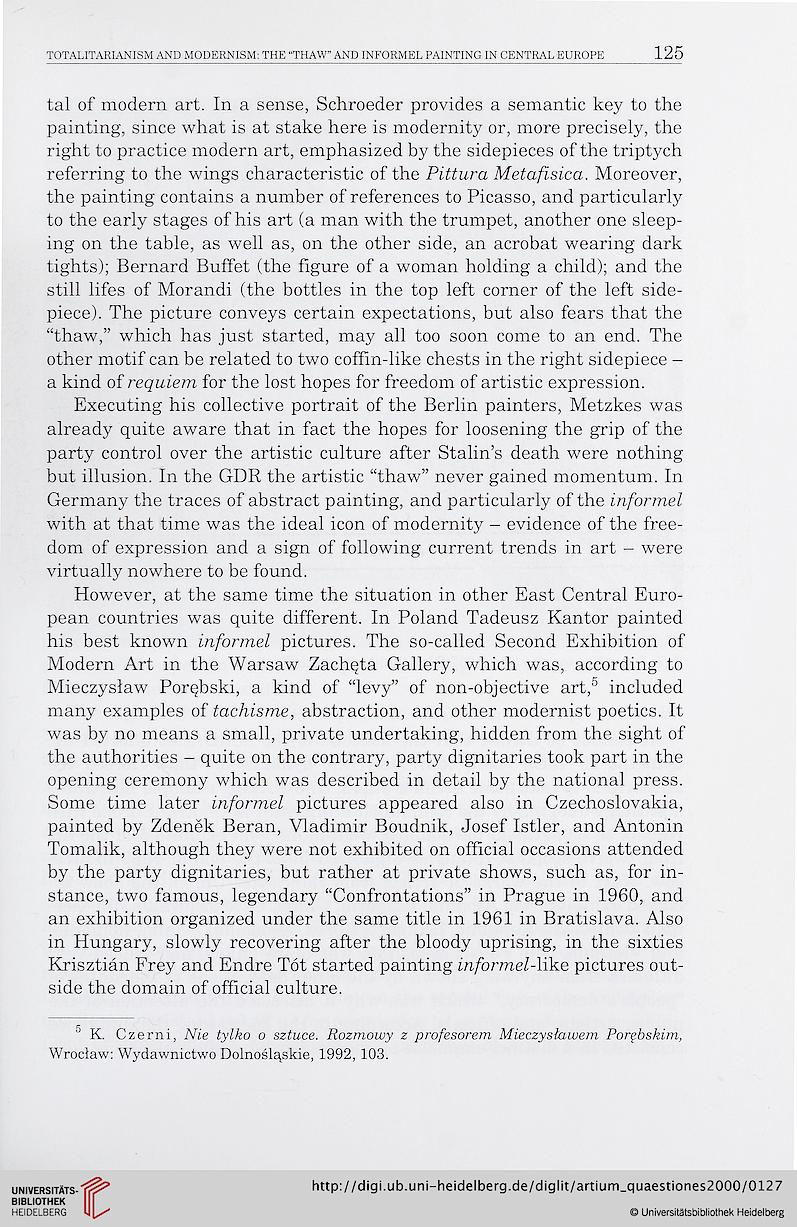 tal of modem art. In a sense, Schroeder provides a semantic key to the
painting, since what is at stake here is modernity or, more precisely, the
right to practice modem art, emphasized by the sidepieces of the triptych
referring to the wings characteristic of the Pittura Metafisica. Moreover,
the painting contains a number of references to Picasso, and particularly
to the early stages of his art (a man with the trumpet, another one sleep-
ing on the table, as well as, on the other side, an acrobat wearing dark
tights); Bernard Buffet (the figure of a woman holding a child); and the
still lifes of Morandi (the bottles in the top left corner of the left side-
piece). The picture conveys certain expectations, but also fears that the
“thaw,” which has just started, may ail too soon corne to an end. The
other motif can be related to two coffin-like chests in the right sidepiece -
a kind of requiem for the lost hopes for freedom of artistic expression.

Executing his collective portrait of the Berlin painters, Metzkes was
already quite aware that in fact the hopes for loosening the gnp of the
party control over the artistic culture after Stalin’s death were nothing
but illusion. In the GDR the artistic “thaw” never gained momentum. In
Germany the traces of abstract painting, and particularly of the informel
with at that time was the idéal icon of modernity - evidence of the free-
dom of expression and a sign of following current trends in art - were
virtually nowhere to be found.

However, at the same time the situation in other East Central Euro-
pean countries was quite different. In Poland Tadeusz Kantor painted
his best known informel pictures. The so-called Second Exhibition of
Modem Art in the Warsaw Zachqta Gallery, which was, according to
Mieczysîaw Porqbski, a kind of “levy” of non-objective art,5 included
many examples of tachisme, abstraction, and other modernist poetics. It
was by no means a small, private undertaking, hidden from the sight of
the authorities - quite on the contrary, party dignitaries took part in the
opening ceremony which was described in detail by the national press.
Some time later informel pictures appeared also in Czechoslovakia,
painted by Zdenëk Beran, Vladimir Boudnik, Josef Istler, and Antonin
Tomalik, although they were not exhibited on official occasions attended
by the party dignitaries, but rather at private shows, such as, for in-
stance, two famous, legendary “Confrontations” in Prague in 1960, and
an exhibition organized under the same title in 1961 in Bratislava. Also
in Hungary, slowly recovering after the bloody uprising, in the sixties
Krisztiân Frey and Endre Tôt started painting informel-like pictures out-
side the domain of official culture.