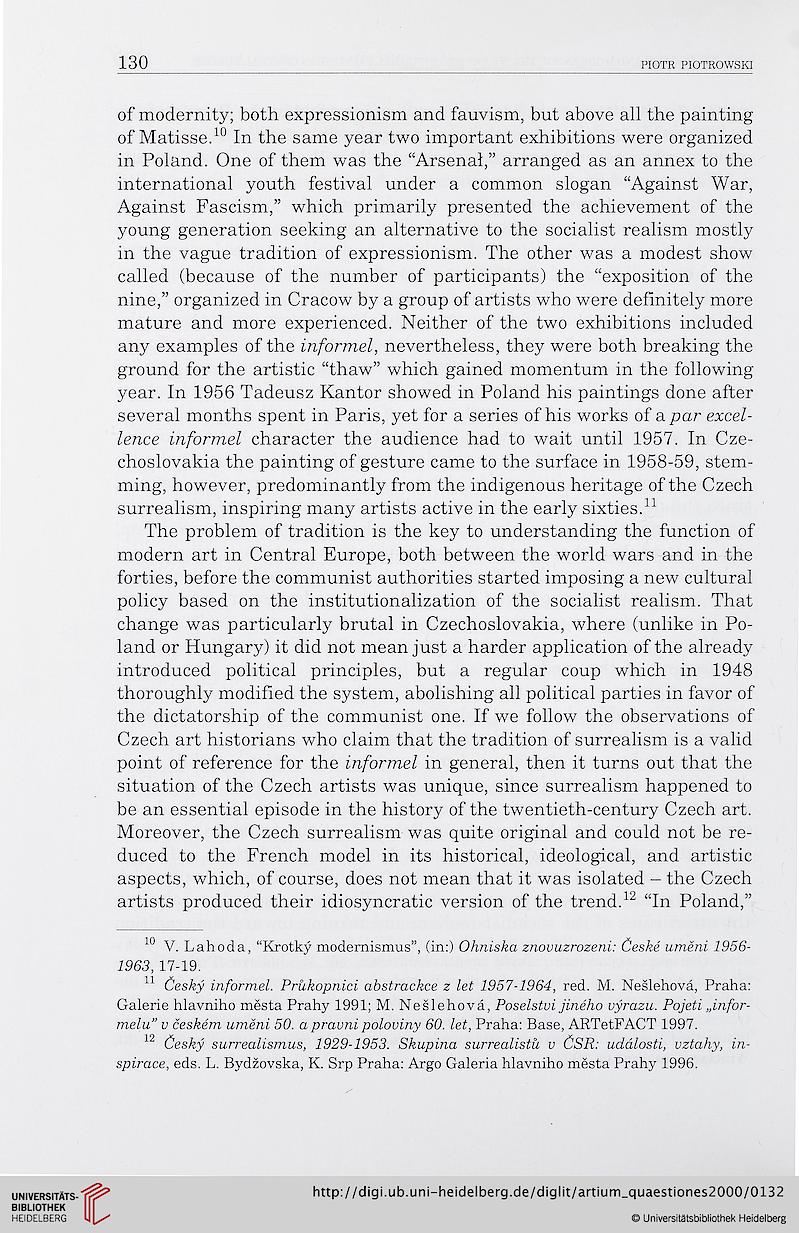 of modernity; both expressionism and fauvism, but above ail the painting
of Matisse.10 In the same year two important exhibitions were organized
in Poland. One of them was the “Arsenal,” arranged as an annex to the
international youth festival under a common slogan “Against War,
Against Fascism,” which primarily presented the achievement of the
young génération seeking an alternative to the socialist realism mostly
in the vague tradition of expressionism. The other was a modest show
called (because of the number of participants) the “exposition of the
nine,” organized in Cracow by a group of artists who were defïnitely more
mature and more experienced. Neither of the two exhibitions included
any examples of the informel, nevertheless, they were both breaking the
ground for the artistic “thaw” which gained momentum in the following
year. In 1956 Tadeusz Kantor showed in Poland his paintings done after
several rnonths spent in Paris, yet for a sériés of his works of a par excel-
lence informel character the audience had to wait until 1957. In Cze-
choslovakia the painting of gesture came to the surface in 1958-59, stem-
ming, however, predominantly from the indigenous héritage of the Czech
surrealism, inspiring many artists active in the early sixties.11

The problem of tradition is the key to understanding the fonction of
modem art in Central Europe, both between the world wars and in the
forties, before the communist authorities started imposing a new cultural
policy based on the institutionalization of the socialist realism. That
change was particularly brutal in Czechoslovakia, where (unlike in Po-
land or Hungary) it did not mean just a harder application of the already
introduced political principles, but a regular coup which in 1948
thoroughly modified the System, abolishing ail political parties in favor of
the dictatorship of the communist one. If we follow the observations of
Czech art historians who claim that the tradition of surrealism is a valid
point of reference for the informel in general, then it turns out that the
situation of the Czech artists was unique, since surrealism happened to
be an essential épisode in the history of the twentieth-century Czech art.
Moreover, the Czech surrealism was quite original and could not be re-
duced to the French model in its historical, ideological, and artistic
aspects, which, of course, does not mean that it was isolated - the Czech
artists produced their idiosyncratic version of the trend.12 “In Poland,”