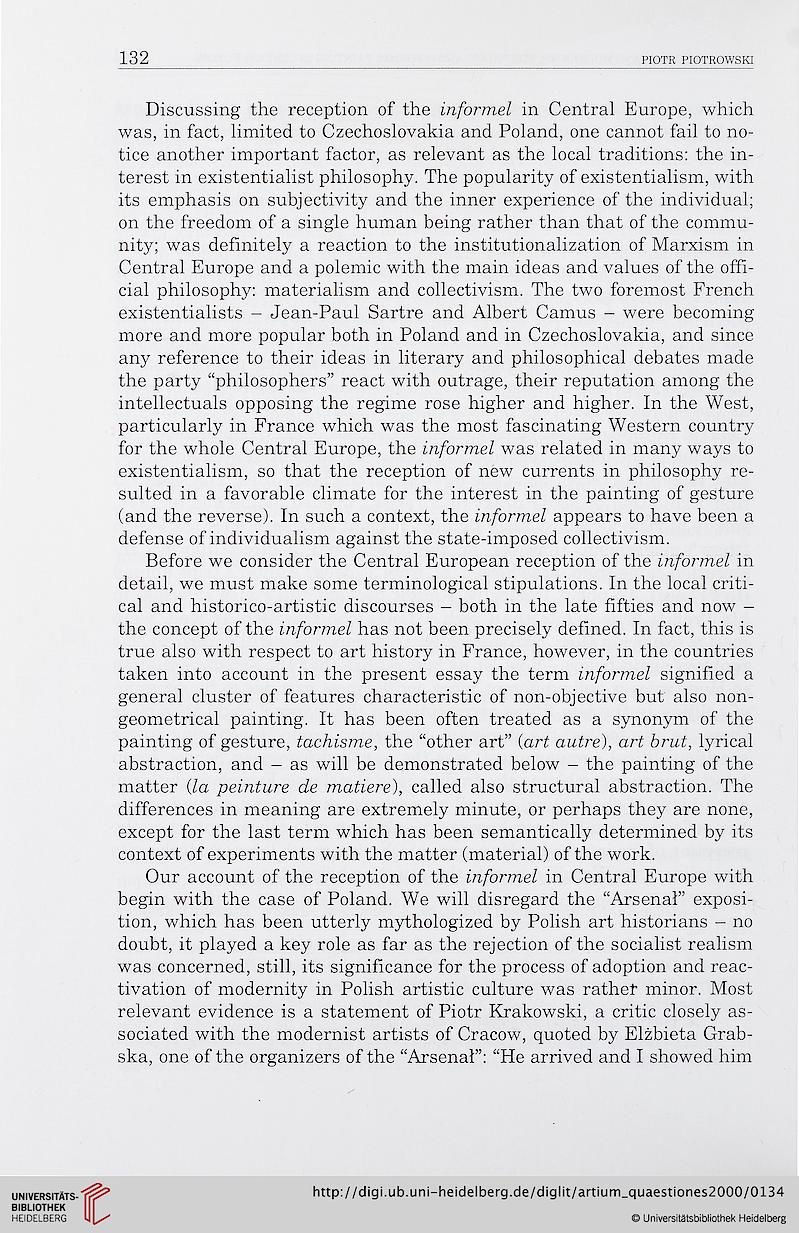 Discussing the réception of the informel in Central Europe, which
was, in fact, limited to Czechoslovakia and Poland, one cannot fail to no-
tice another important factor, as relevant as the local traditions: the in-
terest in existentialist philosophy. The popularity of existentialism, with
its emphasis on subjectivity and the inner expérience of the individual;
on the freedom of a single human being rather than that of the commu-
nity; was defînitely a reaction to the institutionalization of Marxism in
Central Europe and a polemic with the main ideas and values of the offi-
cial philosophy: materialism and collectivism. The two foremost French
existentialists - Jean-Paul Sartre and Albert Camus - were becoming
more and more popular both in Poland and in Czechoslovakia, and since
any reference to their ideas in literary and philosophical debates made
the party “philosophers” react with outrage, their réputation among the
intellectuals opposing the régime rose higher and higher. In the West,
particularly in France which was the most fascinating Western country
for the whole Central Europe, the informel was related in many ways to
existentialism, so that the réception of new currents in philosophy re-
sulted in a favorable climate for the interest in the painting of gesture
(and the reverse). In such a context, the informel appears to hâve been a
defense of individualism against the state-imposed collectivism.

Before we consider the Central European réception of the informel in
detail, we must make some terminological stipulations. In the local criti-
cal and historico-artistic discourses - both in the late fïfties and now -
the concept of the informel has not been precisely defined. In fact, this is
true also with respect to art history in France, however, in the countries
taken into account in the présent essay the term informel signifïed a
general cluster of features characteristic of non-objective but also non-
geometrical painting. It has been often treated as a synonym of the
painting of gesture, tachisme, the “other art” (art autre), art brut, lyrical
abstraction, and - as will be demonstrated below - the painting of the
matter (la peinture de matière), called also structural abstraction. The
différences in meaning are extremely minute, or perhaps they are none,
except for the last term which has been semantically determined by its
context of experiments with the matter (material) of the work.

Our account of the réception of the informel in Central Europe with
begin with the case of Poland. We will disregard the “Arsenal” exposi-
tion, which has been utterly mythologized by Polish art historians - no
doubt, it played a key rôle as far as the rejection of the socialist realism
was concerned, still, its signifïcance for the process of adoption and réac-
tivation of modernity in Polish artistic culture was rathef minor. Most
relevant evidence is a statement of Piotr Krakowski, a critic closely as-
sociated with the modernist artists of Cracow, quoted by Elzbieta Grab-
ska, one of the organizers of the “Arsenal”: “He arrived and I showed him